"Other Voices" -- the Doors 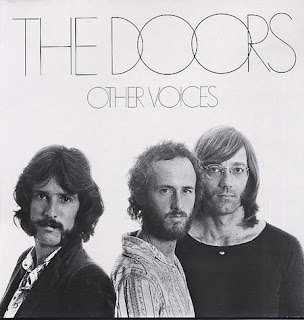 Everyone who knows rock music knows about the Doors. Jim Morrison's apocalyptic personal history and dominant stage personality made him into a legend. And when he died, he became one of rock music's immortals. Of course, the group broke up without Jim, except for a controversial attempt to reform the past year or so.

The legend of Jim Morrison obscured the truth: the Doors were always a band, not just backup musicians for the Lizard King. Songs for their albums* were originally credited to "The Doors," partly so the group could share royalties and partly as a recognition that they worked as a group. This led to odd confusion. I remember one reviewer talking about how Morrison's songwriting was what made the group a success, completely ignoring the fact that "Light My Fire," their biggest hit and the song that put them on the map, was written by Robbie Krieger.

So when Jim Morrison died, the rest of the group had a unique problem. They were musicians and songwriters who really weren't dependent to their front man, but who were only considered backing musicians for him. They also owed albums to their record company and had already been working on songs and musical ideas for it. So what do you do?

The answer was "Other Voices."

The title, of course, refers to Morrison being gone. Krieger and Manzerek handle the vocals, and, though no Morrison, are certainly as good as most rock singers. The songs are also generally good. "Ships with Sails" is a pretty tune, a more upbeat version of "Riders on the Storm." "I'm Horny, I'm Stoned" is a funny tune about the madness of being a rock star. "Variety is the Spice of Life" ("That's what the judge is gonna tell my wife.") is a funny tune about a man's wandering eye. The other songs are all quite good. If it had been a debut album from a new band, it would have led to at least a cult following and maybe a successful career.

But these were the Doors. Though the album was moderately successful, making the top 40 albums), the legend of Morrison overshadowed the group's attempt to redefine themselves. They put out a second album, "Full Circle," which just dented the charts (I'm not familiar with it), then broke up.

And the Morrison legend continues. Alas, any story of the Doors ends in a Paris bathtub, so the fact that the group tried to continue with him has gotten lost. Doors fans are Jim Morrison fans and aren't interested in the rest of the people who worked side by side with him, and often gave him the words and music he was singing.

It wasn't until 2004 that "Other Voices" (and "Full Circle") made it onto CD, and that's out of print. It doesn't deserve this sort of obscurity.

*Except for "The Soft Parade," where Morrison evidently hated Kreiger's songs so they were credited the way they often are now: Krieger-Doors or Morrison-Doors.

Hey man--not all Doors fans are Jim Morrison fans. I'm sitting on a couch with a vinyl copy of Other Voices lying two feet away; it could be my favorite Doors album out there. And I'm a fifteen year old girl, so it might put off your theory even further.. and if you haven't read Densmore's and Manzarek's books yet, you must, they're fascinating, and Densmore's a real funny guy.
There's still hope--we're not all ignorant!
~Shakey

i'm 16 years old and i think i'm a pretty die hard doors fan. i know all the spin-off bands like nite city and butts band and all of ray and robbys solo albums from the 70's and 80's. and i am proud to say that full circle is my favorite doors album along with other voices and the morrison era ones. so a lot of doors do like other voices and full circle. many people are even demanding them!
p.s. the doors have a rare b-side called "tree trunk" that was left of the full circle album. and nite city rocks!