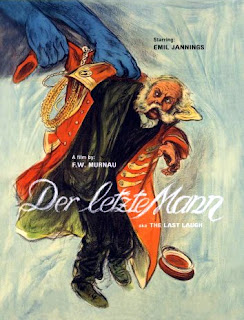 Interest in silent films is fading and younger audiences don’t have a lot of regard for them. If there is anything still relevant, it’s usually silent comedies from Chaplin and Keaton. But there were plenty of good dramas, too, and one of the classics is The Last Laugh.

The story is a simple one. A hotel doorman (Emil Jannings) is happy in his job, which is quite prestigious. People in his neighborhood tip their hats and salute him.  But the doorman is getting old and, when he is spotted taking a break, his boss decides he’s not up to the job, and reassigns him to be a restroom attendant.This breaks him. He keeps his uniform so the neighbors don’t realize his loss of status, but the secret is eventually found out, earning him the scorn of his family and everyone who knows him. 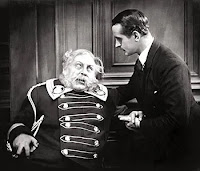 The tragedy is averted by a tacked-on ending that even the director thinks is improbable.* 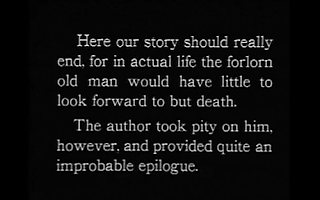 Jannings was a top actor of the late silent days. This wasn’t the only time he played a tragic protagonist and he even was the first winner of the Best Actor Oscar. He returned to Germany immediately after**,  knowing that his German accent was not going to fly once sound came in. He made his most successful film, The Blue Angel, there, playing opposite Marlene Dietrich. Though he was still an important actor in Germany, his legacy was tarnished because he made Nazi propaganda films. Though he argued that he had to make the films, his career ended with the end of the war. Dietrich, who fled Germany and was a staunch anti-Nazi, hated him for it.

From a technical point of view, the film was groundbreaking. Murnau and Mayer wanted to avoid intertitles and there is only one in the entire movie. In addition Murnau, working with cinematographer Karl Freund,*** developed camera techniques that had never been tried before and which were quickly emulated. Murnau is considered by film scholars as one of the greatest directors, and this film shows why.

One aspect of the film that is not clear is the background of German cultural assumptions, which were not known to the American audiences when it came out and are even more obscure now. The doorman’s prestige was because he wore a uniform**** and the demotion devastates him for that reason. Another point is the German title, Der letzte Mann. Literally, it means “The Last Man,” but another meaning is “The man who used to have this job.”

The film was a big success, both critically and financially, and is still highly regarded by film schools and students. The acting style may be dated, but if you watch, you will be moved by the doorman’s fate.

**I’ve seen accounts that he was waiting for a train to take him to New York to sail to Germany when he learned he had won.

***Freund moved to the US and worked on movies like the original Dracula (sharing directing duties uncredited), The Mummy, and Mad Love.

**** Murnau thought the story absurd because "everyone knows that a washroom attendant makes more than a doorman." 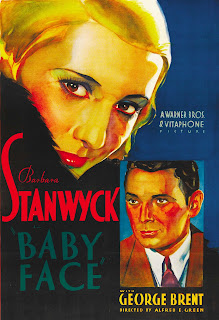 Movies always attracted the attention of bluenoses, and the introduction of sound made it worse. Eventually, a code of censorship – the Hays Code – was set up in 1930, but not rigorously enforced until 1934.* During that short period, files did not shy away from adult subjects, and a perfect example is Baby Face.

Lily “Baby Face” Powers (Barbara Stanwyck) works in her father’s speakeasy, where he forces her to have sex with customers. She develops a friendship with Cragg (Alphonse Ethier), who introduces her to the philosophy of Nietzsche and gives her the idea of only doing anything she needs to survive. When her father is killed, she leaves for New York City with her friend Chico (Theresa Harris), seducing a railroad worker to let them jump a freight. The pattern established, she rises in success by seducing men who are in a position to help her goals.

The movie is much franker than Hollywood films from when after the code is established. It’s perfectly clear that she’s sleeping her way to the top and has no compunction about doing it.

Stanwyck is excellent. In her career, she often showed a hard edge in her roles and it is quite apparent here, along with the ability to turn sweet and helpless when it suited her. George Brent plays the man she finally falls in love with.

As an aside, Theresa Harris is excellent as Chico. Lily treats her as an equal throughout, unusual for a Black actress of the time.  Harris had a fairly long career in films but – as she complained – usually as a maid, because that was the best she could hope for.** This may have been her best role, she it’s clear that, though she is Lily’s maid when she rises to success, she is treated as a friend, confidant and equal. Theresa was also an excellent singer, and was given the chance to sing a bit in the film.

A discussion of the film usually mention John Wayne was in it. This was early in his career and before he established himself in westerns. But his role is small – just a couple of scenes and a dozen lines of dialog.

Despite there being no Hays Office, the movie was censored. Most notable is the addition of a final scene where Lily sees the errors of her ways. The original ending was darker and much more downbeat. It was lost for years, but someone uncovered the cut scenes and added it to the film in 2004.

The movie is a fine example of what movies can do when allowed to take on adult themes.

**Her most visible role this days is as the housekeeper/maid to Susan Walker in Miracle on 34th Street.

Posted by Chuck Rothman at 11:58 AM No comments: 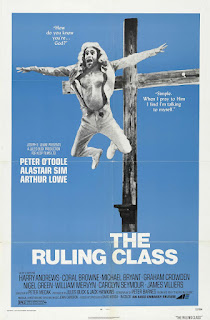 Audiences sometimes had trouble thinking of Peter O’Toole as a great actor. O’Toole thought it was because he was considered so handsome that critics only saw him as a pretty boy, but I think it’s at least partly because his roles often had a quirkiness that some did not take seriously. A prime example of this is The Ruling Class.

Jack Gurney (O’Toole) inherits the title as the 14th Earl after his father dies in an embarrassing accident. The problem is that Jack is a paranoid schizophrenic who thinks he’s Jesus.  This is unacceptable to his family and friends, who find his message of peace and love – and his penchant for breaking into song – make him unacceptable.Jack rises above the machinations for a long time until one finally succeeds, creating a new form of insanity that is far more dangerous but far more acceptable to the ruling class.

This is a bravura performance by O’Toole. His Jack as Jesus has plenty of charisma and wit, and his change at the end is a completely different and dangerous character. The rest of the cast is also perfect for the satirical message that the upper class of UK society is completely corrupt.

This was early in the career of Peter Medak, who has kept busy directing movies and TV.

O’Toole got an Oscar nomination for the role, but, as was always the case, he failed to win it. The movie became forgotten, as people preferred O'Toole in less iconoclastic roles, but this is one of his best.

Sam’s Strip was a comic book that was ahead of its time – and possibly too far behind it.

It was the brainchild of Mort Walker and Jerry Dumas. The two worked together on Beetle Bailey and Hi and Lois in the fifties and both were avid comic strip fans and historians. The idea came to them to write a strip about comics, where the characters interacted with both the greats and the conventions of the genre.  The result was Sam’s Strip.

Sam had a round body, a cartoon nose, and a mouth hidden under the collar of this shirt.  He was joined by a unnamed assistant, and most of the strip talked about the difficulties of running a comic
strip. Sam would go to the comic strip prop closet to bring out some standard comic book devices, like a picture of a saw in a log when he wanted to sleep or exclamation points to hang in the air.  Jerry Dumas would occasionally appear or be referred to. Old-time comic book characters would show up and Sam would talk about the difficulties of getting help or good gags.

There was also a mild political element. Sam would comment on political figures, and editorial cartoon elements (like the weary world pioneered by Herblock) but the strip never took any strong stances a la Pogo.

Walker and Dumas came up with the gags, while Dumas did the art. Walker also did the lettering.

The strip was never very popular. Sam broke the fourth wall in just about every strip, something audiences were not used to. Also, Dumas concentrated on using old-time cartoon characters like Happy Hooligan, who the audience didn’t recognize. It wasn’t necessary to do so, but it may have confused readers.*

The strip folded after less than two years.

But Dumas loved the characters, so in 1977 he repurposed them with Sam and Silo, where Sam’s assistant now had a name. They were small-town police and the strip ran many years.

Posted by Chuck Rothman at 11:25 AM No comments: