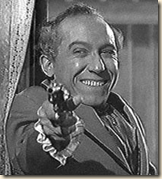 I saw that episode today for the first time! Excellent Michael Dunn!

Absolutely.. I remember him when I was a kid in the 1960s being in many things.. and what an actor he was.. I got older and watched his movies and shows again.. I find it sad that it was so hard to find information about him on the internet.. really good actor.. and what a bad guy he could be LOL