That Was the Week That Was (TV)

I think I mentioned before that I became a fan of political satire at a young age. Of course, political satire was considered iffy programming in the early age of TV, so it was hard to find examples of it. But what I remember most was a short-lived show called That Was the Week That Was (abbreviated as “TW3”).

It started out in the UK. Information about it is sparse, but it looks like the BBC charged Ned Sherrin to produce a TV show that could latch on to a current UK trend for political humor. David Frost was chosen as the presenter and would introduce news stories, often in humorous song.*

The show was a smash, but created controversy and ran for about a year. But an American executive decided to give satire a try and came up with a US version. David Frost crossed the pond and worked on an American version.

The show also used music and in this case, much of it was written by Tom Lehrer, one of the great names in musical satire. He put out an album of his songs for the show, That Was the Year that Was.

The American version lasted a big longer than the UK one. The satire wasn’t quite as vicious.

David Frost went on to be a talk show host and scored a coup when he got an extensive interview with Richard Nixon after Watergate. The movie about their meetings Frost/Nixon, has Nixon thinking Frost was a lightweight who knew nothing about politics, but Frost’s work on TW3 showed he indeed knew the subject.

The videos of the US version have been lost, though there are some of the UK version. I’m not sure how well it would hold up 60 years later, since most of the references are badly dated, but it’s an important milestone in televised satire.

Posted by Chuck Rothman at 7:08 PM No comments: 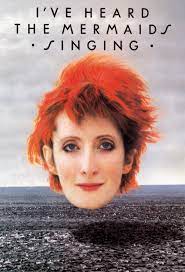 Most Americans don’t think about Canadian films. There are plenty of American films that use Canadian locations for shooting, but films created completely in Canada with Canadian talent are rarely shown outside the big cities. Which is a shame when something like I’ve Heard the Mermaids Singing comes along.

Polly (Sheila McCarthy) is a temporary administrative assistant who is incompetent at everything. She gets a job at an art gallery run by Gabrielle (Paule Baillargeon). While there, Mary (Anne-Marie Macdonald) comes by, Gabrielle’s ex-lover and a painter and they revive their relationship. Polly, who takes photos as a hobby, also want to take part in the artistic life.

The movie has little plot. It mostly focuses on Polly, who videotapes her thoughts and her fantasies. Polly is absolutely charming, someone who is trying to find her place in the world. Gabrielle is cool and calculating, and more than a tad manipulative.

This was near the beginning of Sheila McCarthy’s career. She won a Genie Award for the best  Actress in a Canadian film* and has since garnered a second win and many other awards. She had a recurring role in the first season of The Umbrella Academy and was a regular in the Canadian TV series, Little Mosque on the Prairie.

This was writer/director Patricia Rozema’s first feature, the start of a very successful career as a writer and director, including an Emmy.

The film premiered at the Cannes Film Festival to great acclaim and won a special prize, allowing it to get a distribution deal that paid all shooting expenses. It has also been listed as one of the top Canadian films of the 20th century.

If you’re looking for action, this isn’t the film you want, but if you like a charming character study, give it a look.

Posted by Chuck Rothman at 7:16 PM No comments: 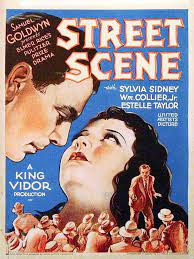 The Hays code went into full effect in 1934 and its strict rules on what could be portrayed was a major limitation on the subjects of films until it was finally was dropped in 1968. It’s not that there weren’t good movies made while it was in effect, but it restricted subject matter, especially dealing with adult subjects. Street Scene dated from before the code, and is a strong drama dealing with subjects that the code wouldn’t allow.

The movie was based on a Pulitzer-Prize-winning play by Elmer Rice about a day in the life of the inhabitants of a single New York City tenement block. It’s a hot summer day, and Emma Jones (Beulah Bondi) is busy gossiping with the neighbors about what’s going on in the building. The chief gossip involves Anna Maurrant (Estelle Taylor), who is having an affair with the collector for the dairy, Steve Sankey (Russell Hopton). Anna’s husband Frank (David Landau) is suspicious. At the same time, their daughter Rose (Sylvia Sydney) is being pressured by her boss to quit her job and go on the stage. He even offers to set her up in an apartment. Rose wisely sees the offer for what it is and refuses, and is attracted to Sam Kaplan (William Collier, Jr.), even though there is a big hurdle:  he’s Jewish.

The main story is spiced by little slice-of-life vignettes, sketching characters both good and bad. It all leads up to a tragedy, but life goes on in the street.

The ending is relatively advanced for its time, with the final shot showing Rose taking on an independent role.

Beulah Bondi holds the movie together. Her comments and explanations not only set up the various situations, but also act as a Greek chorus. This Bondi’s first film role after having played it on Broadway, and she went on to a long career as a character actress, usually playing mothers.*

Sylvia Sidney also had a long career, lasting into the 1990s.

King Vidor was no stranger to directing movies showing ordinary people. His The Crowd is considered one of the classics of silent film and he continued to direct successful films into the 1950s. Except for one scene in a taxi, everything takes place on the same set, as though it were a play on stage.

The movie got caught up when the Hays Office took over.  It went into obscurity, so much so that many of the prints were lost. But it can be found now online at Archive.org.

Posted by Chuck Rothman at 7:22 PM No comments:

Wild Boys of the Road 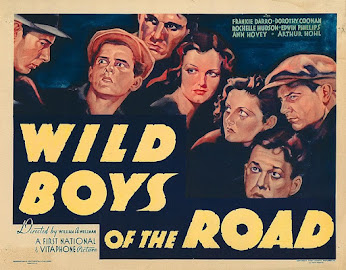 Before talkies came in, Warner Brothers was struggling. The Jazz Singer turned them into a major studio and they continued with gangster films and other movies showing the seedier side of life, and especially life in the lower classes.* Wild Boys of the Road is one of their gems, but one that tends to be overlooked.

Eddie Smith (Frankie Darro) and Tommy Gordon (Edwin Philips) are two teens during the Depression who are suffering its effects. When Eddie’s father loses his job, the two decide to hit the rails to Chicago in search for work. On a freight train, they meet Sally (Dorothy Coonan), and go from train to train until they reach their destination – but there’s no work there. Sally has an aunt who can give them a home, preventing them from being rounded up and sent home, but the aunt turns out to be running a bordello. When it’s raided, the three escape and keep heading east, getting into trouble all the way

The movie still is powerful after all these years.  The three are all attractive characters and you quickly sympathize for them.**

Since this was a pre-code film, the script doesn’t shy away from things the Hays office cracked down upon a few years later. It makes the story that much stronger.

Frankie Darro had been acting on screen for quite some time, starting when he was six. He worked regularly in the silent days, since he was a talented stunt performer and was often the first one called when they needed a child to do a stunt. He kept working through the 1960s, with is best-known role one that he wasn’t credited for – one of the actors who operated Robbie the Robot in Forbidden Planet.

He’s excellent as Eddie – the driving force of the trio and the one who eventually helps to get things fixed for them. Edwin Phipps also puts on a good performance, though his career didn’t extend past this. This was also the only named and credited role for Dorothy Coonan, who left acting soon after this to marry director William Wellman.

Wellman was the director of The Public Enemy, which introduced James Cagney to the world, and had a long and successful career with movies like A Star is Born,**  Nothing Sacred, Beau Geste, Lady of Burlesque*** and The High and the Mighty.

There are two other familiar names and voices. Ward Bond – who appeared in many John Ford westerns and, of course, the Bogart Maltese Falcon --  has an uncredited small but memorable part as a horrific brakeman. And Sterling Holloway was working regularly into the 1980s, appearing on a lot of 50s TV as well as lending his distinctive voice to Disney characters, most notably, their original Winnie the Pooh.

There are many interesting elements in the story. The various teens end up hanging together, including two Blacks. Though their roles stay close to the stereotypes of the time, they seem to be accepted by the other boys riding the rails.

Another touch is the judge who ultimately decides their fate. The actor has the glasses and accent of Franklin Roosevelt, and there’s a prominent poster of the National Recovery Administration eagle in his courtroom.*****

It’s a shame the movie is not better known. Like many 30s films, it is fast paced and fits a lot into its short running time. Not having to abide by the Hays code makes it more realistic than later films.  It’s available at archive.org.

**Darro was actually still a teen  and the other two were just barely out of them.

****From the novel The G-String Murders by Gypsy Rose Lee

*****One of the earliest of FDR’s agencies to fight the Depression, until it was declared unconstitutional.

Posted by Chuck Rothman at 3:41 PM No comments: