My Name is Julia Ross 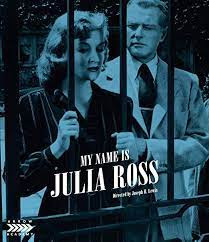 These days, the term “to gaslight” is commonly known – an attempt by a manipulative man to make a woman doubt her sanity. It stems from a successful British play Gaslight, which was made into a movie in 1940*  renamed in the US as Angel Street. Four years later came to best-known version, with Ingrid Bergman and Charles Boyer. Its success led to other stories with a variation same theme, and one of the first was My Name is Julia Ross.

Julia Ross (Nina Foch) is desperately looking for a job and goes to a new employment agency, who immediately hires her to be secretary to Mrs. Hughes (Dame May Whitty). Julia wakes up two days latter in a house in Cornwall, not London, without any idea how she got there.  Ralph Hughes (George Macready) insists her name is Marion and that she is his wife, who had undergone a nervous breakdown and who is trying to recover. Julia can’t convince anyone of the truth; he only hope is to contact her boyfriend Dennis Bruce (Roland Varno) for help. But Mrs. Hughes stays one step ahead of her.

The movie is tightly written with some strong suspense at the end as you wonder what might happen. It’s a slight variation on gaslighting in that they don’t try to drive Julia insane, but merely try to convince others of her insanity, which makes them discount her sincere cries for help as paranoid delusions.

The most striking performance is Dame May Whitty** as Mrs. Hughes. She is sweet and caring and thoughtful on the surface, even while she is planning Julia’s death. Nina Foch is also quite good and Julia is shown to be resourceful and clever – just  not as clever as Mrs. Hughes.

The movie was unjustly obscure and deserves to be seen.

**Miss Froy from The Lady Vanishes.

Posted by Chuck Rothman at 8:21 PM No comments:

The Adventures of Spin and Marty (TV) 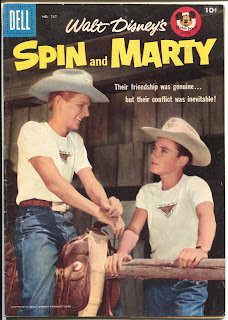 Middle class boys and girls in the 50s had one experience in common:  summer camp.* They would go off for a couple of months, a way to keep them busy without their mother organizing activities.The version in the western part of the US was a ranch, where the kids got to play cowboy for a summer. So when Disney looked around for something to fill the time in The Mickey Mouse Club,” they chose the dude ranch concept and came up with The Adventures of Spin  and Marty.”

Marty Markham (David Stollery) was a spoiled rich boy, raised by his grandparents, who decided a dude ranch would be just the thing. Marty didn’t agree, and had nothing but contempt for the camp and was even afraid of horses. The most popular boy in camp, Spin Evans (Tim Considine) goes to take Marty down a peg or two. Over the course of the season, Marty began to drop his airs and became close friends with Spin. Bill Burnett (Harry Carey, Jr.) looks over Marty’s progress, as does Marty’s butler, Perkins (J. Pat O’Malley).

The stories were all rather basic. Since it was aimed at kids, there were few serious complications, but it was one of the few of the era that actually showed character growth, and Marty lost his contempt and became a part of the ranch.

I'm also amused to see the name of William Beaudine listed as one of the directors. Beaudine gained notoriety due to his direction of low-budget horror films where he would shoot every scene once, no matter how badly it was done, though it seems that reputation was exaggerated. But he was known for shooting movies in a minimal amount of time, a practice that certainly was useful when doing a TV series.

It was a success and two more serials were commissioned. There was also a comic book series.

Tim Considine went on to be Mike of My Three Sons. Stollery had been successful as a child actor before the show, but could not make the jump to grownup star.  Harry Carey, Jr. had made many films before and after this, while J. Pat O’Malley was a very successful character actor, appearing in well over 200 films and TV shows.**

**His most influential role was in Mary Poppins. Though just an uncredited voice actor, Dick van Dyke used him as a voice coach for his cockney accent. The reason it is so ridiculous is that O’Malley – from the Manchester area and used to playing stage Irishmen – really had little idea about what a cockney accent sounded like.

Posted by Chuck Rothman at 10:50 AM No comments: