“One-hit wonder”* is something of a pejorative term, often designating musicians who were talented but only managed to hit it big once. The Honeycombs only had one hit, but it’s a terrific song.

The group came out of London, founded by Martin Murray, who worked in a hair salon with Anne “Honey” Lantree. They brought in Honey’s brother John, and others and started playing in local pubs in February of 1964, just a Beatlemania was hitting the states. While performing, they attracted the attention of Ken Howard and Alan Blaikley, who were just starting out their careers, who gave them “Have I the Right?”

As the “Sheratons,” they were signed by producer Joe Meek, who produced a bunch of UK hits in the era. The record company changed their name to “The Honeycombs,”* and the song was released.
The song went to #1 in the UK and #5 in the US.

The band was notable for being one of the few with a female drummer. Honey Lantree became something of a star, with articles being written about her, concentrating on the novelty of a woman in a rock band – and one who was a drummer. She rightly considered herself a pioneer, but the interest was, sadly, due to the novelty.***

Alas, they had trouble doing a followup. Their next few singles were minor successes in the UK and didn’t break in the US.

They did, however become popular in Japan.  Most of the group broke up in 1966. Honey (who started doing vocals) and John Lantree recruited new members, but only released one single. Despite some popularity in Japan, the group faded away. 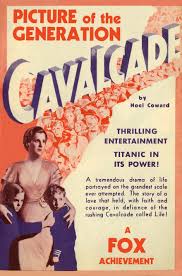 The Academy Awards have had a spotty record of getting things right over the years, especially in the early years when studios instructed their workers to vote for specific films.* It’s interesting to see how well they hold up today. Cavalcade – Best Picture of 1933 – doesn’t do badly.

Starting on the last day of 1899, it shows the lives of two families – the wealthy Marryots, and their servants, the Bridges – over the next thirty years. Jane Marryot (Diana Wynyard) Is always concerned about the well being of her husband Robert (Clive Brook), especially as war and tragedy affects them. Meanwhile Alfred Bridges (Herbert Mundin) and his wife Ellen (Una O’Connor) go out on their own running a pub and raising their daughter Fanny (Ursula Jeans), who becomes an entertainer. She eventually catches the eye of Joe Marryot (Frank Lawton).
The movie is a combination of romance and tragedy, all set against the backdrop of early 20th century England. It’s also interesting in how it portrays people’s reactions as they get over loss surprisingly easily.  Admittedly, time passes, but most of the characters just move on.**  The one exception is Jane, who still remains emotionally affected by the problems in her life.  The movie also has a very strong antiwar message.

It was especially nice to see Una O’Connor. She was a very successful character actress in the early days of Hollywood, best known at Minnie, the comic relief maid in Bride of Frankenstein. She had a distinctive look and appeared in over 80 films and TV shows, often as a maid. This is one time I caught her in a dramatic role, and she’s extremely good.

The rest of the cast are mostly unknown to modern viewers, but they all are just fine (though the acting is a bit stagy).

Posted by Chuck Rothman at 5:35 PM No comments: