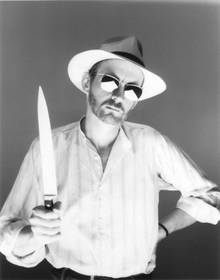 Michael O’Donoghue’s influence on 20th century comedy is incalculable. While he was not the type of comic writer who would ever get mass appeal due to his dark approach to humor, he was a part of two of the most influential comedy institutions of his era.

O’Donoghue grew up in Rochester, NY, and by college, he became enamored of being a comedy writer, writing original revues. Once he graduated, he wrote a comic strip for the Evergreen Review—not a comic magazine – featuring Phoebe Zeit-Geist, a woman who often ended up kidnapped and naked, parodying superhero comics. Gary Trudeau has cited it as an influence.

He ended up being one of the founding writers of The National Lampoon. Now the Lampoon has faded in every way since its heyday, but it was a smash hit when it started, showing a new form of humor – irreverent, dark, sexy, and willing to take no prisoners in its satire.  O’Donoghue was in the center of that. He contributed many articles and eventually rose to be its editor.  One of my favorites was his “How to Write Good,” a hilarious parody of writing advice columns.

By the late 70s, the Lampoon could do no wrong. It jumped into movies with Animal House. O’Donoghue wrote a record album – National Lampoon’s Radio Dinner, and wrote and appeared in the short lived National Lampoon Radio Hour.

Then Lorne Michaels came calling.  He hired O’Donoghue to write and perform in the new sketch comedy he was developing – Saturday Night Live.  O’Donoghue was one of the original Not Ready for Prime Time Players. As such, he was the first person to be shown in the first sketch, and also had the very first line on the show.

O’Donoghue had specific ideas about comedy, and put them into place. In general, he thought violence was funny. The sketch above shows some of it, and it was even more obvious in one recurring sketch where he would do impressions of celebrities have steel needles poked into their eyes. He also did a series of sketches as “Mr. Mike,” who told fairy tales that ended up with death and mass destruction – as he put it “random acts of meaningless violence.”

His most successful SNL sketch – considered a classic of the show --- was the brilliant “Last Voyage of the Starship Enterprise.” If you haven’t seen it, watch it here:

O’Donoghue was prickly, and thus left SNL after arguments. He tried to do a TV special – Mr. Mike’s Mondo Video – which was deemed* too violent and released as a film. He would be hired back a few times to SNL, but always was fired.

He took up acting roles and co-wrote and appeared in Scrooged. He also had some success as a songwriter, most notably “Single Women” which was a hit for Dolly Parton.

O’Donoghue died in1994 of a cerebral hemorrhage; he suffered from migraines for years. I would write more about him, but suddenly I am run over by a truck. The End.

Posted by Chuck Rothman at 7:32 PM No comments: 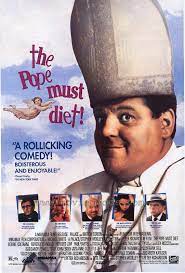 In memory of Robbie Coltrane.

Some movies court controversy and have to overcome it.Sometimes it works out. Other times it kills the movie’s chances. The Pope Must Die(t) is an example of the latter, despite the fact it’s a very funny bit of satire.

In the first scene, the pope dies. A conclave is held, and by accident, they elect David Albanizi (Robbie Coltrane), a humble and honest (and klutzy) country priest, who plays a mean rock guitar. It was part of a plot by Cardinal Rocco (Alex Rocco) who secretly is an agent of the crime boss Vittorio Corelli (Herbert Lom)*.

It turns out the Church is badly corrupted and Rocco is willing to do anything to get rid of Abanizi before he discovers it all and to put the preferred candidate in his place.

Coltrane is excellent as a good man who is overwhelmed (and a bit naïve), and Alex Rocco is perfect as the corrupt cardinal.

Of course, the subject was bound to offend. To say it puts the Church in a bad light is putting it mildly. It is clearly not meant to be a serious look at things and is clearly supposed to be a fictional version of the church**

Still, the film ran into more difficulties. The original title – The Pope Must Die! – was in terrible taste to begin with. The basis for the plot is shenanigans at the Vatican Bank, which paralleled a real scandal.

The studio insisted on cuts, and changed the title in the US to The Pope Must Diet.”*** The title didn’t make a lot of sense, and ultimately didn’t help. The subject turned away many audiences. Many media sources refused to run ads for it under the original title, and didn’t change their minds when the title (and posters) were changed.

Ultimately, the movie failed at the box office. However, once you get past the dark blasphemy of a fictional version of the Church, it turns out to be a first-class comedy.

**They have female priests, for instance, leading to the final joke.

***At Robbie Coltrane’s suggestion,since he saw posters for the movie defaced with the “T” at the end.

Posted by Chuck Rothman at 6:20 PM No comments: 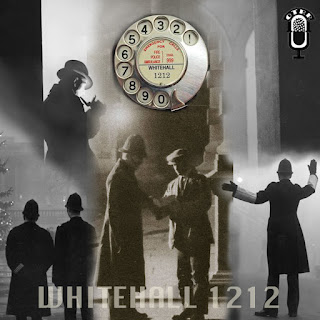 Success in media begets copycats, especially in TV and radio. When Dragnet became a hit, other producers tried to copy the format of choosing actual cases from police files. Of course, Dragnet wouldn’t allow anyone to use the files of the Los Angeles police, so people looked elsewhere. Willys Cooper managed to get the cooperation of Scotland Yard in London, and used it as a basis for Whitehall 1212.

The show clearly was imitating Dragnet*, though with a formula all its own. It would introduce the audience to Scotland Yards’ Black Museum, where mementos of crimes were kept for study.** After talking about the artifact of this week’s case, a police inspector would come in and discuss the case from start to finish, dramatizing what he found and how it all unfolded until the criminal was caught (and usually hanged).

While the show did not have the great characterizations that made Dragnet a hit, the crimes were well chosen and listening to police procedure in the UK shows the difference between the two legal systems. If there was any doubt that these weren’t real cases, one of them was clearly the famous Hawley Crippen case, with all the names changed.***

The show was performed by an all-British cast, and went through different actors in the main show for most episodes.

At about the same time, Orson Welles hosted The Black Museum, another radio show based on its artifacts..Welles’ version wasn’t a police procedural, though, and showed the crime being committed.

The show ran for around a year. Clearly it wasn’t the success Dragnet was, mostly because it lacked the quirky characters that made Webb’s show latter so fascinating (though they tried). Welles’s version didn’t fare much better. But both are fine examples of radio drama.

**There was (and still is) a Black Museum (now called the Crime Museum), though it’s not open to the public.

***Not sure why they had to. The case is famous even today.