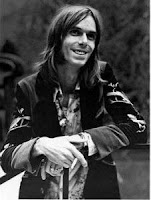 Even if you don’t recognize the name, if you listened to rock music – especially UK rockers – you have heard Nicky Hopkins play. He was quite simply, the businest studio musician of his era.

Hopkins learned the piano at age 3, and began playing professionally when he was 16. Just as his career was taking off, he became bedridden. Hopkins had Crohn’s disease, leading to operations and frail health. It prevented him from joining a band – the touring was too stressful. So he settled into being a session musician.

For a while, if you wanted someone to play piano, you called Hopkins.And the big names called him. He started with the Kinks and the Who, and then worked with the Rolling Stones for nine years.  Other acts that used him included Jefferson Airplane, Jeff Beck, Joe Cocker, Rod Steward, Donovan, Jerry Garcia, Steve Miller, Donovan, Carly Simon, Art Garfundel, Spinal Tap, Joe Walsh and even the Beatles – both as a group and individually with all four members.

With Quicksilver Messenger Service, he recorded his most exciting composition, Edward the Mad Shirt Grinder.

Hopkins took on the nickname of “Edward” elsewhere. When the Rolling Stones released an album of jams from their Let it Bleed sessions, the named it Jamming with Edward.

Hopkins also put out some solo albums, but they didn’t sell enough to make him a star.

He also was a member of the early supergroup, Sweet Thursday. Consisting of Hopkins, Alun Davies, Jon Mark, Harvey Burns, and Brian Odgers, The group might have achieved much, but their record company went bankrupt and could not promote it.

His Crohn’s finally caught up with him in 1994, but he left a legacy of brilliant piano playing.

Posted by Chuck Rothman at 4:33 PM No comments: