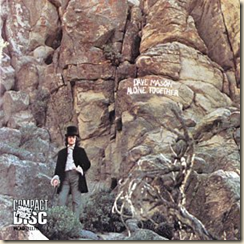 Back when I was in college in the early 70s, Dave Mason's album Alone Together was a favorite of a friend of mine. One day, he took it out to play it and someone who had never seen it before took one look at the LP and blurted, "That record is moldy."

That was one of the album's claims to fame.  Mason recorded this album after leaving Traffic, and someone got the idea to put it out on colored vinyl.  Not one color, but multiple colors, a weird mixture of gray and brown and beige*. I know the first few times I listened I was so fascinated by watching it spin that  didn't really hear the music.

Eventually, though I did, and discovered one of rock's classics.

Mason was a fine songwriter even with Traffic, but he was happier finally getting out on his own and not having to compete with Steve Winwood. He got together a group of well-known musicians, probably people he met while touring with Delaney and Bonnie. This included them, but people like Eric Clapton, Jim Gordon, Carl Radle, Chris Ethridge, Leon Russell, Jim Capaldi, Jim Keltner, John Simon, Rita Coolidge, and many more.  If the names don't all mean anything to you, they did back then -- remnants of Derek and the Dominoes, Mad Dogs and Englishmen, and many others.  It was something of a British collective of musicians who moved around and helped each other out.

But it Mason's show.  The best known cut was his "Only You Know and I Know," a song he recorded about the same time when touring with Delaney and Bonnie and Friends.  "Shouldn't Have Took More than You Gave" is an explanation of a breakup, and other standouts include "Waitin' On You," "World in Changes," "Sad and Deep as You," and "Look at You, Look at Me."**

There isn't a weak cut on the album.  Mason's singing is fine, and the songs are catchy and emotionally strong.

The album was a minor hit, getting up to 22 on the Billboard charts. But Mason's next project hurt his street cred:  a collaboration of Mama Cass Elliott.  The Mamas and the Papas weren't as cool as Eric Clapton and Leon Russell, and, though the album was a good one, it didn't sell -- too much Mason for Elliott's fans, and too much Mama Cass for everyone else.

Mason continued (and still seems to be working).  He had a minor hit single with "We Just Disagree," in 1977.  But Alone Together remains not only his most notable album, but a classic that bears rediscovery.

Of course, the CD will be silver, not moldy***.

*There's no particular reason for vinyl records to be black; some used other colors from time to time.  But the main reason for sticking to black was technical:  if you changed colors, you had to clean the equipment so that it wouldn't pick up colors from the previous album.

** Mason had a thing for long song titles.

*** In the late 70s, I was in a record store and they pulled out a copy of the album to play for the customers.  I pointed.  "It's black!" I said. The clerk said only the first pressing was multicolor, but I knew different -- I picked out mine in a cutout bin.

Alan Moore is quite rightly considered one of the top writers of comic books written today.  His work has been astounding, with things like V for Vendetta, Watchmen, Swamp Thing*, and The League of Extraordinary Gentlemen.**  But lost within these classics is one of his best, a comic that is not only good on its own, but is a satire on the business of comics in general.

1963 was a limited series of six comic books, all with different titles, that were pastiches of the Marvel comics of the 60s.  Moore takes on the personal of "Affable Al" Moore, whose chatty footnotes and replies to letters are quite reminiscent of a very well known Marvel comic editor of the time. Indeed, the letters mention the "sixty-three sweatshop" and gives out "anti-awards" for letters, as readers comment on previous (nonexistent) episodes of the stories.

The characters are clearly based on Marvel superheroes of the time and you can see Moore is trying to make a statement about how superheroes were portrayed.  The six books are:

If you know comics at all,you know who Moore is referring to.***

The stories are very much in the mood of 60s Marvel stories, and matching the style of the comics perfectly. It's the same sort of flat art that we all grew up on and there are often the typical ongoing plots that Marvel was so well known for.

One of the more interesting pieces are the "Affable Al" Moore comments. Moore portrays his alter ego as a pure ego, slave driver who grabs all he can get, and who even threatens a fan (named Neal Gaiman) with a lawsuit over copyright violation.

The series was incomplete.  There was supposed to be an additional comic -- an 80-Page Giant Annual -- where the heroes in the Tomorrow Syndicate would meet with heroes from Image Comics (who published the series). It was clear that Moore wanted to make some statement about the relationship between comics in the 60s with that of the 90s. The final panels have the Tomorrow Syndicate in a world where the flat comic book art had turned to the more three-dimensional art that was the standard of the time.

But the book never came out. The artist -- Jim Lee -- quit comics for a year and never got back to the book.  There were creative differences and eventually too much time lapsed for it to be a viable project.

The comics are hard to find; I don't think they've been collected. But it's a enjoyable look at the past, with a character -- "Affable Al" -- who ranks as one of the great comic book creations.

*Though I prefer the original Len Wein/Bernie Wrightson verson.

** Don't blame Moore for the movie, or any others of his books -- he hates what Hollywood does to his work.