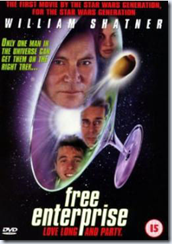 TV stars have always had it rough.  Once they become associated with a role, it often follows them forever.  Al Hodge was recognized as Captain Video for years after the show ended, making it hard for him to get work.  George Reeves had a love/hate relationship with Superman.  Clayton Moore stopped trying to fight it and became the Lone Ranger for years after the show was off the air.  And William Shatner was willing to acknowledge his being identified as Captain Kirk, while also working to act in other roles.  Free Enterprise allowed him to poke fun at his image, while showing he could do something more.

The movie is semiautobiographical, actually based upon how it was made. Mark (Eric McCormack) and Robert Burnett (Refer Weigel)* were die hard geeks and whose greatest hero was William Shatner (William Shatner).  They happen to run into him and manage to convince him to appear in their movie.

The movie is a loving tribute to geekdom, and Shatner has a field day.  His character is just short of crazy, a combination of the Shatner cliches of grandiose ego.  He insists, for instance, that he do a rap version of Marc Antony’s speech in Shakespeare’s Julius Caesar.**

Shatner at the time was at a lull in his career and his role here – and his penchant for comedy – revitalized it.  Actor Eric McCormick also was a TV star by the end of the year with Will and Grace.

**The movie depends on him being able to pull this off,

Posted by Chuck Rothman at 8:14 PM No comments: 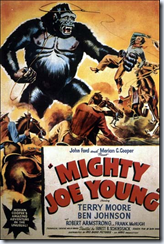 King Kong was a milestone in film and in stop-motion animation, due to the animation of Willis H. O’Brien.  It was followed by a sequel, Son of Kong, the same year, but O’Brien became disenchanted with director Ernest B. Schoedsack and even asked to have his name removed from the credits.  It wasn’t until 16 years later that they worked together on a third giant ape film, Mighty Joe Young.

The movie beings in Africa, where eight year old Jill Young (Lora Lee Michel), the daughter of a rancher, trades for a baby gorilla, which she names Joe.  Twelve years later, showman Max O’Hara (Robert Armstrong) goes to capture animals for a new African-themed night club, with Gregg (Ben Johnson), a cowboy from a wild west show, along to help gather specimens.  Things are looking successful when the camp is disrupted by a giant ape:  Joe Young (Mr. Joseph Young).  They try to capture him but when it looks like he’s about to kill one of the crew, Jill (grown up to be Terry Moore) comes on the scene and scolds Joe until he lets the man go unharmed.  Joe will do whatever she asks.

Max thinks this will be a sensation, so he persuades Jill to bring Joe to Hollywood.  Things go well, at first . . . 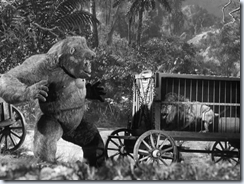 The star of the film is Joe Young and the animation that makes him completely believable.  He’s nowhere near as big as Kong – 10-20 feet tall,* but he has plenty of personality and even a humorous side.  There are several set pieces – Joe’s attack on the camp, for a start – that are masterpieces of the format.  O’Brian, and his young protégé, Ray Harryhausen** not only animated Joe, but fit him in superbly with live action.  You have to watch very closely to see the places where live actors switch to be their stop motion counterparts.

The casting of Armstrong – who was Carl Denham, leader of the expedition, in King King – is a nice touch, and Terry Moore and Ben Johnson are appealing leads.  Moore is especially nice in her reluctance as a performer and how much she hates stardom, and this was Johnson’s first noticeable role.  There’s a bit of stunt casting with former heavyweight champ Primo Carnera*** plays himself going up against Joe.  And character actors Frank McHugh and Charles Lane**** also showed up.

The film did not to well when originally release.  It did win an Oscar for Best Visual Effects, but that doesn’t impress audiences, and the movie did poorly so much so that a planned sequel was never started.  Schoedsack never directed another feature.  O’Brien worked from time to time, but not regularly;  Ray Harryhausen had eclipsed him.

The movie is a charming use of one of the most demanding techniques in film, and is worth watching for the set pieces alone.*****

**The two great geniuses of stop motion; Nick Park is the third.  Harryhausen later claimed that he did most of the actual animation work, since O’Brien was bogged down with technical challenges.

***Carnera was billed as the tallest heavyweight champ of all time (he wasn’t) and was known for being one of the strongest champs around.  He was supposedly managed by mobsters and was something of a curiosity, which continued after he lost the championship to Max Baer in 1934.  Interestingly, he was heavyweight champion when King Kong was released.

****A typical Charles Lane performance of the era:  three lines of dialog and not credited.

Cops came on the air in 1989, and was a sensation.  I suppose it was inevitable that it spawned parodies.  I was going back and forth which of these two shows I’d write about; they always struck me as quite similar, even considering their origin, but when I realized that the same person created both, my decision was made. 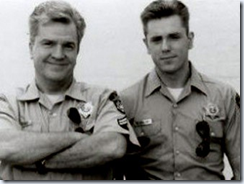 It was a direct parody of Cops.  Bill Ruskin (Leo Buhrmaster) and Pete Walsh (Ron Eldard) were two policemen in Vista Valley, CA, who were the subjects of a Cops-like show as a TV crew followed them around.*  Everything was played straight and without a laugh track, as they ran into comic situations in the stationhouse and on the job.  Pete’s brother Donny (Chris Mulkey) was also on the job, and was dealing with his messy divorce, and a restraining order that kept him 500 feet away from his kids at all times.

One of the most memorable scenes was when Donny had the restraining order amended so he could get within 100 feet of his kids, so he meets them on a baseball diamond and hits fungoes.  By the end of the scene, he browbeats the kids so badly that it’s back to 500 feet by the time the show ends.

The humor is the type I love:  subtle jokes that sneak up on you.  And the point of view allowed for some other memorable moments:  you could see, for instance, that Ruskin’s wife was sleeping with the cameraman, though Bill never caught on.

The series got some critical notice and ran for the seven weeks it was planned for, but ABC declined to pick it up. 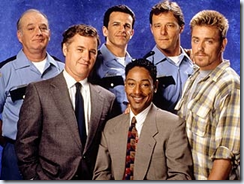 The next year, creator Larry Levin managed to pitch essentially the same concept to Fox with Bakersfield PD.  It was the same situation:  a comedy about the life in a mundane police department.  Detective Paul Gigante (Giancarlo Esposito), who was half Italian and half Black,** had been transferred from the FBI to the more rural Bakersfield, and was teamed up with Wade Preston (Ron Eldard again).  Chris Mulkey was there, too, as a less psychotic officer, and Brian Doyle-Murray*** played the grizzled old desk sergeant.

The show played up Gigante’s professionalism and sophistication against the more laid back approach of the Bakersfield PD.****

The show ran a full season, but once again the humor didn’t catch on and the show was cancelled.  Levin produced some other shows, but nothing of note.  Mulkey, who had come to prominence in Twin Peaks, has had a very successful career in TV, usually in drama, while Eldard has been a dependable, if less prominent, TV and movie face.

And, of course, a few years later, Reno 911 took the concept and made it a hit, but used far broader humor for its success.

**Shades of Al Giadello of Homicide:  Life on the Street, which premiered earlier that year.  As a further connection, Esposito joined Homicide toward the end of its run.

***Brother of Bill.  He added “Doyle-” to avoid confusion with another Brian Murray.

****Much like the tension in Hot Fuzz (though not as good).