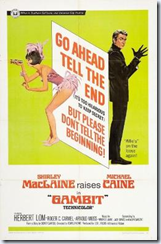 Caper films are always entertaining, but the key – like with anything else – is to keep them fresh.  Gambit is an attempt to try a little big different with the genre with a tricky plot and lost of double crossing.

Harry Dean (Michael Caine) discovered Nicole Chang (Shirley MacLaine), who is a Hong Kong showgirl.  She also bears a striking resemblance to the late wife of a wealthy man, Shahbandar (Herbert Lom), which leads to Dean’s plan:  Nicole will meet with Shahbandar as a way to get into his apartment, and Harry will use the distraction to steal a valuable statuette of Shahbander’s wife.  It seems rather simple at first, but begins to get more and more complex at time goes on.

The movie has several gimmicks.  First of all MacLaine does not speak during the first half hour of the film, as the plot is revealed.  It seems to go off perfectly, but it turns out that it didn’t work at all, and the real plot involves multiple twists so that you can’t really know what’s going on until the end.

At the time it came out, Maclaine was a top star and she’s wonderful, first as the mysterious dancer, and later as a real person.  Michael Caine was still a rising star when cast, but his success in The Ipcress File had started his career.*  He gives his usual fine performance.

The movie has pretty much been forgotten.  Director Ronald Neame had an up-and-down career, with successes like The Poseidon Adventure and The Prime of Miss Jean Brody, but nothing that really put him on the map.

The movie does have some wonderful ideas, well executed, but time seems to have left it alone. 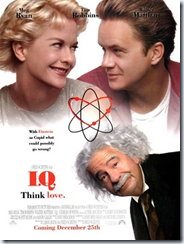 Posted by Chuck Rothman at 8:25 PM No comments:

You, Me, and the Apocalypse 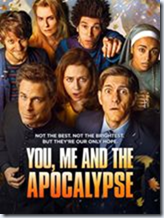 There are clearly some anglophiles at NBC.  Years ago, they attempted to bring British shows like Dame Edna and Spitting Image to American TV.  They were critical success, but flops in the ratings.  This year, NBC decided to do it again with the end-of-the-world comedy/drama You, Me, and the Apocalypse.

There series follows many stories in a world where a comet is about to strike Earth and end all life there.  Jamie Winton (Matthew Baynton) is a bank manager is Slough* who is suddenly arrested as a terrorist.  Jamie is still getting over his abandonment by his wife Layla, and starts to discover he had a twin brother Ariel, who is with her and who is head of a group of hackers.  Meanwhile, Rhonda McNeill (Jenna Fischer), who is going to jail for hacking the NSA.  She’s innocent but wants to protect the real culprit, her son Spike (Fabian McCallum)as a hacker to protect her son Spike.  In jail, she befriends the white supremacist Leanne (Meagan Mullally).

At the same time, Sister Celine Leonti (Gaia Scodellaro) is asked to work at the office of the Devil’s Advocate at the Vatican, led by the rather unpriestly Father Jude (Rob Lowe).

And then the word gets out:  a comet is about to hit Earth.  So things get a bit complicated.

The story starts out as a black comedy with some serious elements, but as it goes on, it becomes a serious film, with overtones of religious faith and straight-on adventure.  It constantly surprises as characters do things you never thought they’d do

The cast is, of course, excellent.  Mathew Baynton is especially excellent as both Jamie and Ariel, switching from lost and decent, to pure evil.  Meagan Mullally’s Leanne is so different from her role in Will and Grace that you wonder if it’s the same actress.

The show just finished its first season on NBC with a cliffhanger.  Unfortunately, the ratings were not great, so there’s doubt there will be a second season.  At the moment, it can be watched on the NBC site and also on Hulu; give it a look.