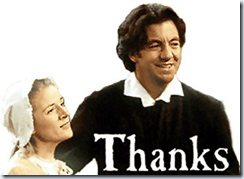 (1999)
Created by Phoef Sutton, Mark Legan
Starring Tim Dutton, Kirsten Nelson, Cloris Leachman, Jim Rash, Erika Christenson, Andrew Ducote, Amy Centner
IMDB Entry
I generally enjoy Cracked.com* for their various lists and snarky comments.  But you have to take things with a grain of salt, and sometimes they get things completely wrong.  The most recent case was their attack on Thanks.**
Created by Phoef Sutton (a writer and producer for Cheers), Thanks was the story of the Winthrop family in Puritan New England in the 17th Century. James and Polly Winthrop (Tim Dutton and Kirsten Nelson) were the parents of William, Abagail, and Elizabeth (Andrew Ducote, Erika Christenson, and Amy Centner). Rounding out the family was James's mother Grammy (Cloris Leachman).
The show poked fun with the stereotype of the stern, repressed Puritan.***  One of the running gags was Abagail using her imagination to talk about new inventions (like a stove that runs on something other than wood) and being sent to the stocks for it.  There was a lot of humor in how the family's feelings ran up against the Puritan ethic.  For instance, this speech by James:


I have decided in hopes of lifting the spirits of the community to hold a gathering in the shop tonight. Everyone’s invited. There will be music and, well, not dancing, because that’s a sin. It will be a, well, not a party, because that would be wrong. But I assure you we’ll have lots of, well, not fun, because that’s against everything we stand for. 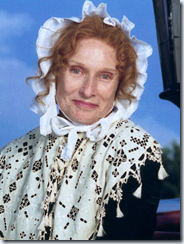 Grammy was, of course, the stereotypical horny grandmother.  It wasn't a new idea even back when the show aired, but no one plays that type of role better than Cloris Leachman.
The show was basically a family comedy set in the Puritan age, but that didn't stop it from getting a lot of humor from the juxtaposition.
Alas, the ratings weren't kind.  The show was introduced in August, so it wasn't going to make the fall schedule, and it didn't do well enough in the ratings to be renewed.  It wasn't a great show, certainly, but it had a lot of goofy charm -- a quality I prize very highly.
___________________________________________
*I'm always amused at the reversal between it and Mad Magazine.  For most of my life, Cracked was a second-rate imitator of Mad.  Now, Mad is barely relevant while Cracked has found its footing.
**I'm convinced they never actually watched the show, and got their ideas about it from the sparse Wikipedia article on it.
***Something that is far from the reality; sexually, at least, Puritans were pretty liberal for the time, and most of the stereotype is really Victorianism being projected on them.
Posted by Chuck Rothman at 11:16 AM No comments: