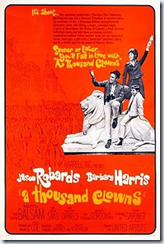 Jason Robards has always been regarded as one of our best actors, both on stage* and in film and A Thousand Clowns is one of his most memorable film roles.

The movie follows the life of Murray Burns (Robards) who one day quits his job writing for a children's TV show to do what  he pleases.  Murray is the guardian of his nephew Nick** (Barry Gordon) as he gets away from the rat race and lives life fully.

But there are complications, in the form of two investigators from the Child Welfare Board, Sandra Markowitz (Barbara Harris) and Albert Amundson (William Daniels), who threaten to remove Nick from the Murray if he can't show he is capable of being a guardian. 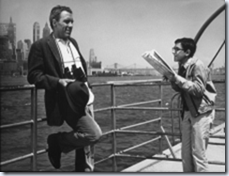 The movie was a Broadway hit brought to film, with much of the original cast reprising their roles.  Thus the acting is smart an assured.  Robards is funny, very charming, mercurial, and a character you can't keep your eyes off, while Barry Gordon managed to be portray a smart kid in a way that's not too cute and not too artificial. It's something to watch him work with Robards; the two have a special rapport gained from doing the show on stage.

Barbara Harris, in her first film, is a charming love interest, while William Daniels portrays the strait-laced character that he's always known for.  Both are great, but Martin Balsam, as Murray's brother Arnold, who tries to talk sense into him, won a supporting Oscar for the role.  It could easily have gone to anyone else in the cast and, indeed, the film was nominated for Best Picture that year.

The movie did OK in the box office, and most of the cast made a real mark in films and Broadway.  Even Gene Saks, who played Murray's former boss, was a big success, though as a director.  And Herb Gardner, who wrote the play and screenplay, had several other Broadway successes, most notable, I'm Not Rappaport.**** Barry Gordon, while never a star, is still working pretty steadily, a major accomplishment for a child actor.  Oddly, Fred Coe only directed one more file, though he did work in TV.

The play is revived from time to time, but the movie seems to become obscure.  That's too bad, since it's an entertaining and funny film.

**His name during the movie.  Nick is allowed to choose his own name and has in the past used Wilbur Malcome Burns, Theodore Burns,  Raphael Sabatini, Dr. Morris Fishbein, Woodrow Burns, Chevrolet Burns, Big Sam Burns , and Lefty Burns

***It was first a Broadway hit, with many of the original cast making it to the movie.

****Gardner's name appeared regularly in the New York Magazine competition, where readers were asked to submit small, funny bits on a particular theme.  Gardner's entries seemed to show up just about every week, and someone once even used his name as one of the jokes. 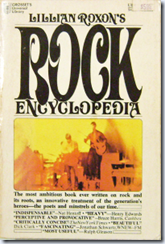 Rock music was always slightly disreputable, which is a major part of its popularity and charm.  And because of this, few critics took it seriously. One of the first was Lillian Roxon, and her Rock Encyclopedia was a critical landmark:  the first attempt to list the groups that made the genre.

Roxon was born Lillian Ropschitz in Italy.  He family, fleeing fascism in Europe,* migrated to Australia in 1937 and changed their name to Roxon.  Lillian became a journalist and moved to New York city in 1939 as an overseas correspondent.  By the mid-60s, she turned her attention to rock music.  She became part of the rock scene by being willing to take it seriously and she had a good eye for what groups might make it big.

By 1968, she had developed enough of a reputation to put together the major project:  the world’s first encyclopedia of rock.   The book covered all the major acts, of course, but also many minor ones, and included what she saw as interesting new groups.**

But what made the book special was Roxon’s writing.  This wasn’t a dry listing of groups and their history, but an entertaining and lively personal journey through the music.  Some of the entries were unforgettable, as this description of how B.B. King was introduced to rock fans at a concert where he was billed beneath Elvin Bishop and Eric Clapton:

“Well, for a start, old B. doesn’t even stand up. He doesn’t have to. He just sits back in his chair, still relaxin’, smilin’ a little and smokin’ his Tiparillo, and suddenly he lets go a little pure and ever-so-simple soul.  Like he’s been doin’ this for a long time.  No fancy playing now, just a couple of strokes, and – well, the whole room is wiped out.”

She could have a wonderfully dry sense of humor as in this entry about the Royal Guardsmen:

“Their song depicting Snoopy (the Peanuts dog) fighting the Red Baron became a million seller in three weeks. One month later, they did a sequel to it.  And one year later, `Snoopy’s Christmas.’  Some people question the Royal Guardsmen’s imagination.”

After the book, Roxon continued to write on rock and on feminist issues, but her health started failing as she developed asthma.  She died in 1973.

The Rock Encyclopedia is her legacy.  There was an attempt to revise in in 1978 with Ed Naha brought in to update the book, but Naha*** was not in Roxon’s league as a stylist, and the book was rewritten to eliminate some of the more obscure entries and adding new groups from the previous decade.  It was considered inferior to the original.

The book is a bit dated, and some of the groups have been forgotten.**** But the book was and still is the perfect snapshot of where rock was in 1969.

**The Rock Encyclopedia, for instance, had an article on Soft White Underbelly, a group from Stony Brook, Long Island that had not even put out an album yet.  You’ve probably never heard of them, but you have heard of the name they finally settled on:  Blue Oyster Cult.

***Whose most famous work was his screenplay for Honey, I Shrunk the Kids.

**** Acts such as the Brotherhood, the Candymen, Even Dozen Jug Band, Penny Whistlers, and Stone Country, and Jeremy Steig and the Satyrs, who had two entries in the Encyclopedia, under “Jeremy” and “Steig”. 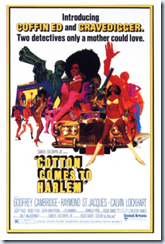 Ossie Davis (along with this wife Ruby Dee) was a cultural icon, known for breaking into acting in 50s and 60s in roles in which he insisted on playing with dignity and gravity, in contrast to the way that Blacks were often portrayed in films.  But Davis wanted to do more and managed to turn in mind to writing and directing.  The result, Cotton Comes to Harlem, was instrumental in creating an entire movie genre.

The movie is based upon a novel by Chester Himes, a series of mysteries featuring his “Harlem Detectives”:  Coffin Ed Johnson and Gravedigger Jones, two NYC cops who use hard-nosed tactics to go after dangerous criminals.

In the movie, Johnson (Raymond St. Jacques) and Jones (Godfrey Cambridge) are brought in after a scamming preacher (Calvin Lockhart) is robbed of his money, which may be inside a bale of cotton.  Half of Harlem is out to track it down.

This is a film about character.  Johnson and Jones are cold blooded when it comes to solving a case, but also have a mordant sense of humor about life.  Indeed, the movie is as much a comedy as it is a detective film:  it never stops for laughs, but they come through wisecracks and a skewed view of life.

Godfey Cambridge is one of my favorite actors of the time, always willing to take chances or give a wisecrack, and his Gravedigger has a sly sense of humor throughout.  Raymond St. Jacques is also good as Johnson, and Redd Foxx is memorable as a junk dealer* who is instrumental in finding the cotton.  Also in the cast are Cleavon Little, Judi Pace, Eugene Roche,** and Lou Jacobi.

The movie was made for a moderately low budget for the time, and I suspect it was released to modest expectations.  But the film became a hit.  Black audiences wanted to go to a film where black characters made up most of the cast, and white audiences were attracted to the humor and action sequences.  With Sweet Sweetback’s Baadasssss Song and Shaft – both released the next year – a genre was born:  Blaxploitation films.

While the genre may seem dated today, Cotton Comes to Harlem isn’t.  Davis, who always acted with dignity, directed a film with a dignified heart beneath the action, which makes it still hold up pretty well.

**Another actor who I love.