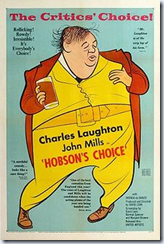 David Lean is one of cinema's most honored directors, known nowadays for The Bridge Over the River Kwai, Lawrence of Arabia, and A Passage to India, as well as some well-regarded Dickens adaptations.  Though primarily known for his epics, like most top directors, his filmography is varied, and Hobson's Choice was his foray into comedy and a charming look at romance enhanced by a very talented cast.

Henry Horatio Hobson (Charles Laughton) is the owner of a very successful shoe shop.  He's a drunkard and a bully, a minor tyrant who is successful primarily because his three daughters Maggie (Brenda De Banzie), Alice (Daphne Anderson), and Vicky (Prunella Scales) do most of the work without pay.  Maggie actually runs the shop, and she of the others want to be married and free of their father's tyranny.*  While Alice and Vicky have found potential husbands and may be able to leave, Hobson refuses to allow Maggie to see anyone, since she is too useful to him.  Maggie focuses on Hobson's one paid employee, Will Mossop (John Mills) and pushes him to marry her and start out on their own.

The movie is a delight from start to finish.  Laughton always was a dominating screen presence, and, under Lean's direction, is given enough rope to turn in a terrific performance as the likeable bully.  He does show a gift for physical comedy:  watch the opening, where the character is established (skip ahead to 2:30).

Brenda de Banzie matches him in strength and charm, playing Maggie as clearly being her father's daughter -- maybe too much so for her father.  She was primarily a stage actress, it seems, and this is her one notable film role.  She makes it count.  John Mills*** is also fun as her reluctant suitor.

The film seems to have done well at the box office, but, being a British production, slowly faded from viewing. It was so different from the type of big production dramas that Lean became famous for that those who liked his movies probably didn't like this one.

For Brenda de Banzie, this was the highlight of her career, while John Mills ended up winning an Oscar for Ryan's Daughter, also directed by Lean.  Laughton, of course, kept up his larger-than-life persona as a major star for the rest of his career.  In addition to Laughton and Mills, probably the best-known member of the cast was Prunella Scales, who gained popular culture immortality as Sybil Fawlty in the classic comedy Fawlty Towers.****

**Father of 60s Disney star Hayley Mills.  It started out that Hayley was billed as John's daughter; then John was Hayley's father.  Now they're both pretty obscure.  Mills has said that Hobson's Choice was the favorite of all his films.

***Irrelevant bit of trivia: if you ever visit Victoria Falls, you can stay in a Fawlty Towers in Livingstone, Zambia.  Word has it that it has a real touch of class. 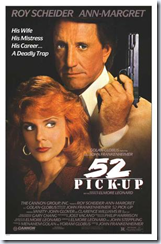 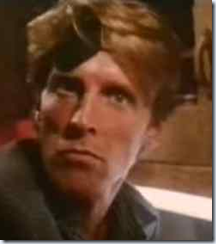 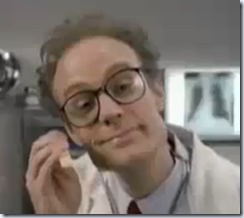 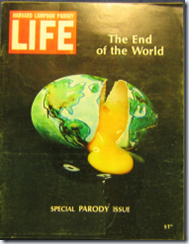