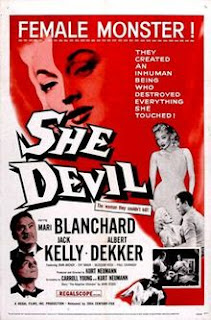 50s science fiction has the reputation of being monsters attacking. That’s generally true, but from time to time a movie was made with a different focus.  She-Devil doesn’t fit that model as all.

Dr. Dan Scott (Jack Kelly) is working to develop a project that could curse any disease. The only thing he needs is a human subject, but his mentor, Dr. Richard Bach (Albert Dekker) blocks the idea as too dangerous. But Kyra Zelas (Mari Blanchard), a young woman dying of tuberculosis, seems a perfect subject and Scott manages to browbeat Bach into trying.

The cure is miraculous. Within a day or so, the TB is gone, and Kyra is able to get out of bed.  Scott and Bach have her stay at their house so they can observe.And they discover that Kyra can do anything in order to adapt:  change her hair color, manipulate people, and seduce them* as necessary.  Dr. Bach wants to put an end to this, but Dan has already been seduced by her and is very reluctant to act. It becomes a moot point as Kyra quickly adapts to thwart their plans. Soon she is nearly invulnerable, so she leaves the house to find more wealthy prey.

The movie is adapted from the story “The Adaptive Ultimate” by Stanley G. Weinbaum.** I’ve talked about Weinbaum before, but, in brief, he wrote one of the most influential  stories in the entire science fiction genre, “A Martian Odyssey.” The movie stays pretty close to the book. It’s also different from most 50s SF in that there is no actual monster. Kyra is manipulative and cruel, but still human in appearance. The grand climax has next to no action, but the point of the movie is the concept and the puzzle of how to stop her.

Jack Kelly became a TV star a few years later as he portrayed Bart Maverick when James Garner had a contract dispute. Here he is a typical 50s leading man – smart and resolute. Albert Dekker was a minor SF icon as the title character of Dr. Cyclops, though you’d be hard pressed to recognize him, since he hasn’t shaved his head and doesn’t wear Coke bottle glasses. He is the scientist who keeps urging Dan to do the right thing. Dekker had a long career in both movies and TV.

Mari Blanchard was busy as an actress, almost always in small roles. He work here shows a lot of range, moving from a woman scared of dying to being a heartless manipulator. She had made quite a few B movies in the 50s, but retired in 1963*** after being diagnosed with cancer. She died in 1970 at age 47.

Of course, those reading the cast list should immediately recognize Blossom Rock. She looks quite different than Grandmama in The Addams Family, but once she speaks, she’s instantly recognizable.

The movie was overlooked. It was rare to see it in discussions of 50s SF.**** I suppose it was because it didn’t fit in the mold for the genre – no action scenes, no giant monsters. It certainly wasn’t successful enough to cause a buzz for a sequel. I found it quite good, if talky.

**The story was published under his Jessel pseudonym.

***Except for a few small guest starring roles.

****I remember one reviewer (possibly Baird Searles of F&SF) who had no idea it had anything to do with Weinbaum until he saw it and recognized the plot (probably because he didn’t know who Jessel really was).

Posted by Chuck Rothman at 9:49 PM No comments:

King Leonardo and His Short Subjects

Saturday morning TV in the 60s was for kids, keeping them busy as their parents slept in. There was a big market for kids cartoons of the era,  and one producer was Total Television, whose biggest success was King Leonardo and His Short Subjects.

King Leonardo (Jackson Beck*) ruled over the kingdom of Bongo Congo, aided by his loyal assistant Odie Cologne,** a skunk (Alan Swift). Leonardo was slightly dimwitted and Odie often had to bail him out from plots by Biggie Rat (Beck), who plotted to get Leonardo’s even more dimwitted twin, Itchy Brother (Swift).

The stories, like the classic Rocky and Bullwinkle, were in serial form, with Odie always saving the day for the king. Nothing was particularly subtle, but it certainly entertained.

There were two other cartoons making up the show.*

The show ran for several years, the name changing to The King and Odie, and, when it was cancelled, Total Television (now dubbed Leonardo Productions) used the characters (and the episodes) in some of their other shows like Tennessee Tuxedo and Underdog).

The show was ignored for decades, along with several other of Total Television. It took awhile to get any DVDs out and they were often published with Rocky and Bullwinkle, which had a similar look, but a much different sensibility.

**I got the pun when I first saw the show.

***Typical of the era, where there were three main cartoons (plus bumpers) to fill a half hour.

****No connection to Don Herbert.

*****The voice Mel Blanc imitates when he voices Foghorn Leghorn.

Posted by Chuck Rothman at 3:16 PM No comments: 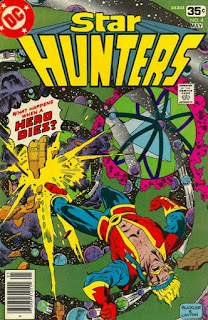 Comic books are an iffy medium and there were many times where a comic died early due to lack of interest. One interesting failure was DC’s Star Hunters.

It was an attempt to cash in on the popularity of Star Wars.  Marvel had gotten the rights to the Star Wars characters, so DC created their own. The Star Hunters were a group of space adventurers* who were sent off on a mission by the Corporation to find the origins of human life. Their leader was Donovan Flint,** who tried to complete the mission.  He has no choice:  they’ve all be infected with a virus that will kill them if they ever set foot on Earth again.

The seven issues saw the crew finding out new things about the universe, each other, and the Corporation.

I picked up the first issue because of my love of science fiction and the idea of a space opera series that presented something a bit different and I had liked Michelinie’s continuation of Swamp Thing, which managed to pick up the story and take it in new directions. But this story never actually caught fire.

What I do remember best from it was the cover of the fourth issue.  In issue 3, some danger overtook Fint. And the cover of issue 4 says, “What happens when a hero dies?”

Well, the first rule of advertising is to never lead with a question and my thought at once was “He comes back to life again.’

Still, I think the comic was an interesting attempt at comic book space opera, even though it was ultimately unsuccessful. The title folded after seven issues. The characters have made very sporadic appearances, but lay in the forgotten corner of comic book history. Maybe one day someone will try to bring them back.

*Akin to the crew of the Liberator in Blake’s 7

*Clearly with a nod toward Errol Flynn

Posted by Chuck Rothman at 6:22 PM No comments:

TV (and especially US TV) is youth oriented, showing featuring characters under 40. But sometimes you come across a show that focuses on older characters, and Still Game is both charming and very funny. 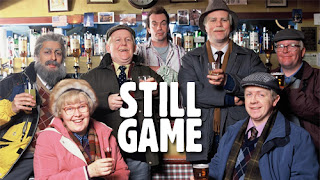 It follows the life of Jack Jarvis (Ford Kiernan) and Victor McDade (Greg Hemphill), two old-age pensioners in Scotland. The two have been friends since they were boys and retirement is not very fulfilling for them – spending days at the local pub, and having to fend off the lack of respect from the younger generation. Jack and Victor try to liven it up with schemes and plans, both on their own and with other friends, including Winston Ingram (Paul Riley) who is more of a schemer than the two of them (and more inept), the gossipy Isa Drennan (Jane McCarry), and a pack of recurring characters from the bar, all overseen by the put upon barman Boabby (Gavin Mitchell). Navid Harrid (Sanjeev Kohli), the owner of the local convenience story often comments on their attempts.

The show is filled with laugh-out-loud moments. Despite their liking for bending the rules for their advantage, Jack and Victor avoid cruelty unless the victim deserves it. All the character are more than just comic stereotypes, too. There is a genuine affection for everyone, and the show is not afraid to show a person’s vulnerable side.

Still Game came out of a stage play Kiernan and Hemphill, which was quite successful in Scotland, with the characters reused as a series of skits in a couple of BBC Scotland sketch chows. It became a series on its own, starting in Scotland before moving to the main BBC. It continued sporadically over the years as new one-offs and seasons were produced.

The show doesn’t hide its Scottish roots. The accents are strong,*  but I think that adds a lot to the show. Another thing is the look of the characters. American TV tries to put attractive people in all roles, even ones where the character would not be that good looking in real life. UK shows have no problem casting characters with unusual, but lived-in looks.**  I also love the jaunty theme song.

It’s currently on Netflix. Check it out.***

**French shows take it even further, with memorable faces that are hardly movie-star looks.

***And don’t skip the credits.  The post credit sequences are hilarious.