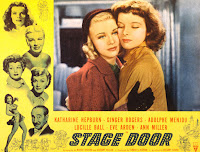 **One of the delights of the film is realizing that there is a dance number featuring two of Fred Astaire’s dancing together. Alas, La Cava shoots the scene without showing their feet!
Posted by Chuck Rothman at 12:07 PM No comments: