James Caan is an underrated actor. For the casual moviegoer, he’s only remembered for playing Sonny Coreleone in The Godfather, the role that brought him to prominence.  But he has a long history of excellent performances, and Thief is a case in point.

Caan plays Frank, a professional jewel thief who is looking to settle down a bit with a romance with Jessie (Tuesday Weld).  But when Frank’s fence is murdered, he goes to Leo (Robert Prosky) who wants Frank to work with him.  Frank is reluctant, but his relationship with Jessie gets serious, so he decided to take it up so they can have a good start.

Of course, things don’t work out that way.

Caan is excellent throughout, playing a man who has long kept his emotions bottled up and is tentatively opening up when things go wrong. It’s really his movie, and he hits all the notes perfectly.

The rest of the cast also was perfect.  Robert Prosky was a great villain and Dennis Farina (in his first film role) was menacing as one of his thugs.  Even Jim Belushi* puts in a strong performance.

The other star of the movie is the score.  Tangerine Dream, a German electronic music group, was chosen to do the score.  It was controversial at the time, but the music is integral for setting the mood and creating excitement.  Here’s the opening sequence:

The success led to the group being used in quite a few successful films of the 80s.  Note, too, how well Caan plays a professional, tossing away jewels that don’t meet his standards.

The film was the first from director Michael Mann.  It’s a surprising achievement and it’s clear from the start he would be a major talent.  He’s primarily worked as a producer since then, but he certainly has been a major film success.**

In memory of Dennis Farina.

**The film’s producer, Jerry Bruchheimer was also fairly successful, and quite a few of the others in the cast became well known to viewers.
Posted by Chuck Rothman at 12:33 PM 1 comment: 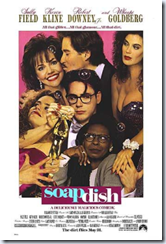 There’s a thin line between soap opera and farce.  The daytime drama is an easy target for humor and satire, with its reputation for overwrought emotions and weird plot twists.  Soapdish was an attempt to play it all for laughs, and the result was one of the better comedies of the 90s.

The movie takes place on the set of the long running soap opera, The Sun Also Sets, whose star, Celeste Talbert (Sally Field) has a reputation as being “America’s Sweetheart.”  But co-star Montana Moorehead (Cathy Moriarty) wants to take her place, even seducing the producer David Barnes (Robert Downey, Jr.) to make it happen.  Barnes gets head writer Rose Schwartz (Whoopi Goldberg) to rewrite the script to bring back actor Jeffrey Anderson (Kevin Kline), who was kicked off the show by Celeste many years ago.  Part of that involves the introduction of a new character, played by Lori Craven (Elisabeth Shue), who adds more tension to the set.

The movie is a soap opera played for laughs; the off-stage antics of the actors parallels the outrageous plotting of the show within a show.  Secrets and relationships are revealed, all with a great amount of delicious overacting.  Much like in 20th Century, the actors soap opera play the roles they think they’re cast in.

Everyone is having a delicious time.  Kevin Kline was always great in farce, and this rivals his role in A Fish Called Wanda.  Sally Field shows that she can handle broad comedy, and Cathy Moriarty is always fun to watch.

The movie did adequately on the box office, but was not a breakout hit. Still, if you appreciate a silly farce on the tropes of soap opera, Soapdish is a treat.

Music may be the food of love, and most kids love music from very early on.  And one of the big thrills is being able to make your own.  If you were growing up in the 50s, if you learned music in elementary school, you probably learned by playing the tonette.*

The tonette was invented in 1938 by Zienger Swanson of the Chicago Musical Instrument Company** in 1938 and quickly caught on in schools and in other places where a simple musical instrument was in demand.

The music was simple, but most kids loved being able to play “Three Blind Mice.” It has occasionally shown up in professional contexts; it can be heard in the background in Cream’s “Pressed Rat and Warthog,” played by Felix Pappalardi.

The instrument faded in popularity in the 60s.  Supposedly, it’s still being used now, but I can’t find any indication online that anyone is selling them, other than an occasional one on eBay.

**Manufacturer of Gibson guitars for many years.

***The left pinky was placed in a ridged circle to hole the instrument.  The right thumb had the same sort of arrangement.