A Boy and His Dog

Harlan Ellison is a legend of science fiction. Part is due to his writing; his work for years has been among the best the field has to offer, and he's won more science fiction awards than anyone other than Connie Willis. Part is due to his TV work: he's written scripts for The Outer Limits, Star Trek, Space: 1999, The New Twilight Zone, and Babylon 5. Much is due to his personality. Harlan is larger than life: witty, nasty, indignant, kind, vicious, and everything in between. SF fans make up legends of Harlan and if not all of them are true (one told to me was just an older joke with Harlan's name added), they are all entertaining.

A Boy and His Dog is one of the few adaptations of one of his story stories (as opposed to a script written for TV). The story was a Nebula Award winner, and packed quite a punch in its day, especially with the twist at the end.

It's the story of Vic (Don Johnson) and his dog, Blood (voice of Tim McIntyre), who live in a post-apocalyptic world. Blood is genetically enhances; he can talk to Vic and can warn him of danger (as well as be a weapon). The two are inseparable, until Quilla June (Suzanne Benton) shows up. She comes from an underground society, people living in bomb shelters and trying to pretend life is normal. And soon, Vic has to decide who is more important. 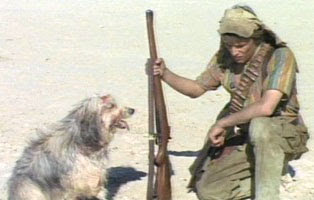 The film was directed by L.Q. Jones. If the name's familiar, it's because of his work as an actor. He's appeared in over a hundred films and TV shows, usually westerns, and most often playing the grizzled old timer. Sam Peckinpah especially loved to use him. This was one of his few forays into directing (and writing) and he does an interesting job of translating Ellison to the screen.

Ellison, of course, hated it. While some of his criticism is valid (especially of the final scene), some of the the changes that Jones added to the story made it work that much better, especially the bizarre imagery of life underground. Ultimately, it is one of the few successful adaptations of an award winning SF story.

There's a very young Don Johnson in the lead. This was his first starring role, but it didn't seem turn him into a star; that took another ten years. Jason Robards has a small part, possibly as a favor to Jones. The movie is still unique in that it's the only Nebula Award winning movie to be made from a Nebula Award winning story.

Posted by Chuck Rothman at 7:47 PM