Top of the Lake 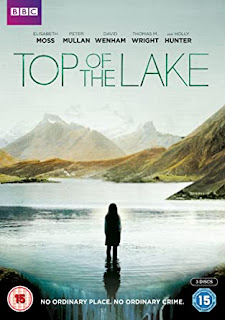 Jane Campion came to notice with her direction of The Piano, a dark drama of forbidden love that won Oscars for herself, Holly Hunter, and Anna Paquin. In 2013, she turned to TV with the intense drama Top of the Lake.

Tui Mitchum (Jacqueline Joe), a 12-year old girl, is found standing in an icy lake. When she is rescued, they discover that she is pregnant. Robin Griffin (Elisabeth Moss), a detective who specializes in cases involving children, and who grew up in the area, joins to solve the case. Tui won’t name the father, but does put the words “No one” on the wall when asked to identify him. Then she disappears.

Robin goes to track down the girl, along with Al Parker (David Wenham), a local detective known for his work with young offenders. Tui’s father Matt (Peter Mullan) seems a very likely suspect, but Matt is extremely recalcitrant, making him look even more suspicious. Meanwhile, she finds Johnno Mitchum (Tom Wright), her sweetheart in her teens, and a bad boy who is still attractive. There is also a commune of women camped out at the lake, led by the spiritual leader GJ (Holly Hunter).

The show is more about Robin dealing with her past and her demons than a simple police procedural. All the characters have secrets, and the final revelation about Tui is horrifying. She ended up winning a Golden Globe for the part.

Moss is terrific in the role of a woman trying to get to the bottom of a horrific situation while dealing with her own problems. The rest of the cast is strong an understated.

Holly Hunter does a good turn as a character that really doesn’t have much to do with the story. I suspect she did it as a favor to Campion.*

The series was successful enough to earn Moss her first Golden Globe Award. Not for the fainthearted, but it is a first-class bit of drama.

Posted by Chuck Rothman at 10:32 PM No comments: 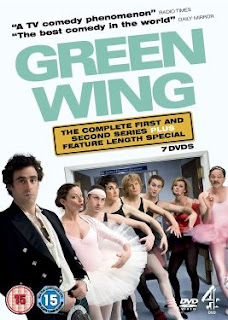 There are certain things you expect from a show these days. TV comedies are half an hour. Medical comedies are about wacky patients. Green Wing ignored these and became one of the funniest comedies of the last twenty years.

The cast was a big one, but the one who is closest to a lead is Caroline Todd (Tamsin Greig), who lacks confidence and is going to a posting at the mythical East Hampton Hospital* where she has to deal with situations that only lead to embarrassment. She ends up sharing and apartment with Angela Hunter (Sarah Alexander), who is effortlessly perfect in everything she does. Caroline also works with Guy Secretan (Stephen Mangan), a jerk who tries to bed any woman he sees, and “Mac” McCartney (Julian Rhind-Tutt), the handsome surgeon with plenty of real charm. There’s also consulting radiologist** Alan Statham (Mark Heap), who is overbearing, pedantic, and flustered, especially when his student Boyce (Oliver Chris) baits him. Statham is having a secret affair (he thinks) with the HR director Joanna Clore (Pippa Haywood), who hates her job. Harriet Schulenberg (Olivia Coleman) is the put upon mother of four, who is overworked and is stuck in a bad marriage. Martin Dear (Karl Theobald) is a shy and uncertain UK equivalent of a medical resident, who never has graduated to a full doctor because he keeps failing the tests.

And then there’s Sue White (Michelle Gomez), staff liaison officer. Ostensibly, her job is to help staff with problems, but her character is completely surreal. She doesn’t care about her patients, and goes out of her way to embarrass them. But it’s not deliberate cruelty. Sue does things that make no sense in any context, like wearing a mouse mask in her office or barking like a seal.

The show’s structure was very different. In addition to being an hour, it works like a series of blackout gags with multiple plotlines intertwined, some lasting multiple episodes. Stylistically, the scenes are separated by short bumpers of the characters doing something, with the action speeded up or slowed down (and often both in the same sequence) as sight gags come into play. Another characteristic is that it is extremely rare for them to be caring for patients. They are only seen occasionally and the doctors never even discuss medical issues.

The result is uproariously funny.

Of course, many of the names are quite well known now, most notably Olivia Colman, who seems to be in everything British these days. Tamsin Greig has been busy, mostly in TV like The Guilty and Episodes. Of course, Michelle Gomez became a figure in fandom after she was cast as Missy in Doctor Who.

The show ran two seasons, with a Christmas special. There was talk of more, but it never came to pass.

Posted by Chuck Rothman at 3:30 PM No comments:

Awhile back, Hulu was not just another streaming service. It streamed most of its shows for free, hoping to make money by ads.Gradually, they added more and more paid entries, until it’s now using the same model as Netflix and the rest. But back then, you were able to discover shows you never would have noticed. It’s where I discovered Misfits, the best show about super powers on TV. But there were other, more grounded series and another great one was The Book Group.

Clare Pettengill (Anne Dudek) is an American who has moved to Glasgow, Scotland. Bored and not knowing anyone, she starts up a book group to discuss literature. The group consists of Kenny McLeod (Rory McCann), and easygoing guy who’s in a wheelchair after an accident. There are also Fist de Grook (Saskia Mulder) and Dirker (Bonnie Enstrom), trophy wives of local pro football* players, and housewife Janice McCann (Michelle Gomez. Rounding out the group are student Lachlan (James Lance) and Rab (Derek Riddel), who has some secrets of his own.

The story isn’t about the books – they rarely manage to get around to talking about them – but the personalities and quirks of the characters. Clair is acerbic, while Kenny is always upbeat. Janice is unhappy in her marriage, while the other all have issues that mix drama and comedy.

Annie Griffin not only wrote all the episode (not unusual in British TV), but directed them, too. It allows her to slowly reveal character as the show progresses, while also showing how the group changes them.

The show was successful  in the UK, winning a couple of BAFTA Awards** before Griffin moved on.

A couple of faces should be familiar.  Dudek – who is excellent – was cast in House as Amber. I’m certain that her performance in The Book Club was a factor in her getting the part; there are many similarities. She also had a recurring role in Mad Men.

Michelle Gomez went on to become famous as the totally bonkers Sue White in Green Wing. Of course, you’re more likely to have heard of her as Missy in Doctor Who.

After two seasons, the show Annie Griffith went on to other things. There was an announcement of a movie, but nothing seems to have come of it, and the cast has moved on. Still, the result is fun and entertaining.

**UK equivalent of an Emmy

Posted by Chuck Rothman at 11:57 AM No comments:

Byron Preiss was a book packager. He would put together books and series and sell them to publishers, saving them the effort of finding writers and coming up with themes. Preiss was a little different in that he was also an accomplished author, and one of his strangest projects was Schlomo Raven, Public Detective in the first issue of an intended series Fiction Illustrated.

The book was in graphic form, showing the adventures of Raven, who was based in Hollywood. It  consisted of two stories.In the first, “The Farx Job,”  where the Farx Brothers are kidnapped, possibly by monsters. The second story, “Rosebug,” has a more serious tone, as it shows an Orson Welles character working to save his film, American.

The names throughout are parodies of the real people. “The Farx Job” tries for a slapstick feel, while “Rosebug” is played a bit more straight.

Raven is short and with a prominent nose, part parody of the hard-boiled detective trope, and part pure slapstick. Tom Sutton’s art is reminiscent of 50s Mad Magazine. He shows a strong talent for caricature.

Fiction Illustrated format was strange. The book itself was an odd size (5 x 6 1/2”) and the pages were on newsprint, like a comic book. I wonder if the size hurt the distribution.

The magazine only ran four issues. Number two, Starfawn, had art by Stephen Fabien, but the story didn’t really go anywhere; I think they were hoping for a series.  Two more issues were produced before the series ended.

Schlomo Raven was an interesting experiment, but I think it might have had a better chance of catching on if there had been more issues of Fiction Illustrated featuring him.

Posted by Chuck Rothman at 7:58 PM No comments: