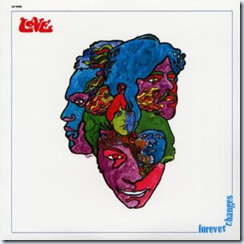 It’s difficult to break into music, and some extremely talented groups never had the success they deserved.  That’s especially true when your songs are an eclectic mix that’s not easily categorized.  Add to that internal strife and you have a recipe for failure.  Love was never a big success in sales, but they produced one classic album.

The group starts with Arthur Lee.  He was a black kid growing up in Los Angeles and an aspiring songwriter and musician.  He started composing songs in his teens – surf music and the like – and several of them were recorded.  When the Byrds came along, Lee was inspired, as he felt they were using the same sort of sound he was working for.  He formed a small folk-rock group which he eventually named Love.  In 1966, after being signed to Elektra Records, the group put out their first self-titled album.

It was certainly eclectic, with folk rock and what later to be called “garage rock” being featured.  It received good reviews, but with only modest sales.

Once nice thing about the 60s was that record companies were willing to stick with an artist who didn’t become an immediate hit, so the group followed up with Da Capo.  Like the first album, it was nearly all Arthur Lee compositions.  Most notably, it was one of the first albums to have a track fill an entire side (and the first single album to do it) with the jam “Revelation.”  Lee’s music was still evolving to add psychedelic and punk themes.

But there were tensions.  When they came to record their next album, Lee and Bryan MacLean started out being backed by studio musicians.  This caused the rest of the band to realize they were missing out, so they rejoined Lee and MacLean and started to be serious about their music.  The result was their masterpiece Forever Changes. Here’s an example:

But Lee’s eclectic approach and complex melodies** wowed the critics, but didn’t help with sales, and the album was their worst seller yet.

Lee decided that they needed a new approach and fired the rest of the band.  Their next album, Four Sail was a bit of a disappointment, and the various follow-ups never allowed for a turnaround.  Lee moved to more of a hard rock sound, which probably alienated his older fans without attracting new ones.

Lee finally went solo*** but had no success.  There were various attempts to get the old gang together, but they never came to much.  Lee also went to jail for several years,**** during which Brian MacLean and Ken Forssi both died.

Love’s influence is vast, with many people listing Forever Changes as favorites, including Robert Plant and Jim Morrison.  Many UK acts have also cited them.

Lee died in 2006.  The remnants of the group, with a couple of the original members, is still touring as more and more people come to discover and appreciate them.

**Just to get this out of the way:  one of their songs on the album, “Red Telephone” has the line “We are normal and we want our freedom.” This line is also used in “We are Normal” by my favorite band, the Bonzo Dog Band.  The two songs got the line from the same source:  the play Marat/Sade.

***Which he was doing starting with Four Sail, anyway.

****The prosecutor on the case was later found guilty of misconduct.

Posted by Chuck Rothman at 10:16 PM No comments: 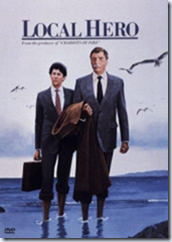 Bill Forsyth was a Scottish writer/director who loves his characters.  He had a knack for creating quirky but real people to populate his films, and his scripts often meandered in ways you’d never expect.  Local Hero is his best work.

“Mac” McIntyre (Peter Riegert) is an executive for a Texas oil company run by Felix Happer (Burt Lancaster).  He’s sent to Ferness, a small town on the Scottish coast, with plans to buy up land for an oil refinery. Mac meets with the oil company’s agent, Danny Oldsen (Peter Capaldi) and takes rooms at the hotel/pub run by Gordon Urquhart* (Dennis Lawson).  Gordon also runs everything else in town and, unbeknownst to Mac, knows all about the plans.  The townspeople are perfectly happy to take their money from the refinery, except for Marina (Jenny Seagrove), a marine biologist who wants to protect the local environment.

The movie allows you to enjoy the characters.  Marina seems to have some miraculous secrets, and Gordon is a charming conniver.  There’s also a Russian sea captain who docks in order to watch over his stock portfolio, and Ben Knox, a beachcomber who owns the beach.

Burt Lancaster is wonderful.  At this time in his career, he had learned to be a little less intense and the result is – like everything else in the film – is charming.  All of the character vie to be funny and very, very human.

This was Forsyth’s most successful film.  His next, Comfort and Joy, was also a charmer, but his career petered out after that.  Maybe it was his leaving Scotland. 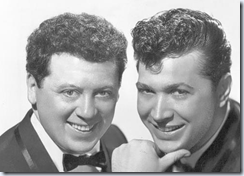 Comedy teams are a thing of the past.  Even though standup is going strong, the idea of a comedian and straight man combo – a setup dating back to vaudeville – has died out.  The form seems too stagy for today’s tastes.  Allen and Rossi were one of the last big stars in the genre.*

Steve Rossi was actually discovered by Mae West.  He was a singer, and West loved having handsome men surrounding her in her shows.  He went on to be a singer with Nat “King” Cole.  When Cole heard he was thinking of doing comedy, he hooked him up with Marty Allen, a standup comedian.

The two worked out an act, but it was a flub on the part of Allen that gave them their catchphrase.  In one show, Allen blanked on his line and blurted out “Hello, dere.”  It helped to make them a star.

Their act was simple, with Rossi asking questions of Allen, who would come up with the punchline.  Unlike other straight men, Rossi rarely joked, leaving the laughs to his partner, but singing a song to either open or close the act.

Allen’s appearance worked for him.  Like many comedy duos, they were mismatched in size:  Rossi was tall and slim, Allen was short and chubby. He had a round face and large eyes that helped him sell the joke, but the goofiest part of his was his hair – a wild, curly mop that gave the impression of a dandelion.  The jokes are far too “jokey” for audiences today, but Allen still manages to get laughs out of it.  He also did “impressions,” which consisted of Rossi announcing him as a celebrity and Allen not making the slightest attempt to mimic the person, and even starting out with “Hello, dere.”

The act was a smashing success, doing the club and the talk show circuit, and eventually The Ed Sullivan Show, where they became favored comedians.** Which leads them to the main reason they’re cited today:  they were on the show for the Beatles’ first appearance.  That’s a hard act to follow, but Allen and Rossi managed to charm the audience of teenage girls who were not their usual demographic;

The two of them appeared in three of the four Ed Sullivan Shows that featured the Beatles, and seemed to have a mutual liking for the fab four.

The two continued to perform in nightclubs and TV, and in 1966 appeard in the film The Last of the Secret Agents?, which flopped badly.***  Finally, in 1968, the two split (amicably).

Rossi kept trying with other partners, but drifted away from show business.  Allen kept busy as a game show celebrity on The Hollywood Squares and occasional actor.

The two occasionally re-formed the act for Las Vegas, drawing their old fans.  It all ended with Rossi died in 2014.

**They appeared there 44 times.

***The clip I found appears to be pretty awful, though it could be scene as a certain inspiration for Austin Powers.

Posted by Chuck Rothman at 9:00 PM No comments: 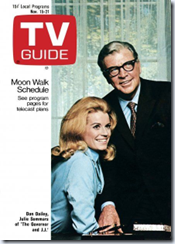 Leonard Stern was a major name of 1960s comedy, if for nothing else than his creation (with Roger Price) of Mad Libs.  But he also produced and wrote TV shows with his partner Arne Sultan, shows like  Get Smart, He & She, The Good Guys, and Macmillan and Wife. The Governor and J.J. was just another example, and deserved more than the single season it was on.

The show was about William Drinkwater (Dan Dailey), governor of an unnamed state (probably in the midwest). He was a widower, so the role of First Lady fell to his 20-something daughter, J.J. (Julie Sommars).  J.J. was a mildly rebellious child of the 60s, who much preferred her work as a curator at the local zoo and who often disagreed politically with her father (mildly).

The show was only political in the general sense, usually dealing with personalities more than real issues.  Often, J.J. would say something that was potentially embarrassing, and the governor would have to work with her to put out the fire.  Or other other way around:  J.J. had to find evidence to quash a potential scandal (which turned out to be an innocent error, of course).

Dan Dailey was a Hollywood and Broadway hoofer, appearing in many musicals of the 40s.  Julie Sommars had been a frequent guest star on TV.

After then, Dailey’s appearances were less frequent.  Sommars worked steadily in TV, and eventually got a regular role in Matlock.

I’d love to be able to see it again.

Stanley Donen is an extremely underrated director.  Partly this is because his best work is with musicals, which are passe as a film form.  He directed several classics – On the Town, Seven Brides for Seven Brothers, Funny Face, The Pajama Game, Damn Yankees, and, of course, one of the greatest films of all time, Singin’ in the Rain.*  By the 1960s, he seemed to grow tired of musicals and he switched to one of the best of all Hitchcock pastiches – Charade.

Regina Lampert (Audrey Hepburn) is an American living in Europe, having a final lone vacation before she divorces her husband.  She runs into the suave stranger Peter Joshua (Cary Grant), but when the returns to her home in Paris, her husband is dead, leaving her only a few trivial items.  But three sinister men – Tex Panthollow (James Coburn), Herman Scobie (George Kennedy), and Leopold Gideon (Ned Glass) show up at the funeral.  The CIA gets into the act:  the administrator Hamilton Bartholomew (Walter Matthau) reveals what’s going on.  The three men and her husband were part of a group who stole gold from the French resistance.  And there is a fourth man, Carson Dyle, and Peter Joshua (who keeps popping up to help out Regina) might just be Dyle.

The movie is full of double crosses and plot twists.  It’s clear the Cary Grant** is having a lot of fun playing the mysterious Mr. Joshua.  Hepburn also seems to like the light romance.

Coburn, Kennedy, and Glass are familiar film heavies of the time, and also make the most of their roles.  Walter Matthau is also especially effective.

The movie was a big hit at the time, and was well regarded for the way it managed to be both Hitchcockian and original.  Donen continued to direct, with quite a few successes, including the brilliant Movie Movie.

**If you’re doing a Hitchcock pastiche, why not use one of his favorite actors.

Posted by Chuck Rothman at 2:26 PM No comments: