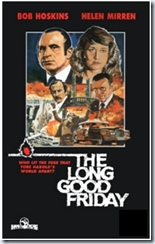 Bob Hoskins was a remarkable actor.  He was usually seen as something of an everyman, a teddy bear who would show a temper born of frustration.  The Long Good Friday was a much different role, and Hoskins was brilliant in it.

Harold Shand (Hoskins) was a small-time London gangster whose brutality and ruthlessness brought him to the top of the underworld. He is trying to start making money legitimately, when some of his organization are murdered, often by bombs going off.  Not only is the bad for his people, it’s bad for business, and Harold decides to put an end to it – using the ruthless methods that brought him to the top.  This is a big mistake.

Hoskins’s biggest strength is his blustery persona, usually used to comic effect.  In this case, though, he plays it seriously.  He is a dangerous man (or at least he thinks it is) who is used to getting what he wants by bullying and cruelty.  It’s one of his best roles.

The movie made him an important actor.  Though he had done some successful British TV,* his movie roles were either small or in unimpressive films.  After seeing him here, producers started 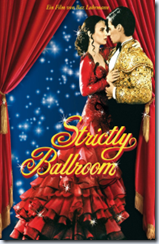 Some film careers take off like a rocket, only to fizzle out.  For a while, Baz Luhrmann looked to be a great new film talent, and this was clear from his first feature, Strictly Ballroom.

It’s about Scott Hastings (Peul Mercurio), a ballroom dancer trying to win the Pan-Pacific Grand Prix.*  Scott has his own idea about how things should be danced, which angers the traditionalist judges, who look disdainfully on “crown-pleasing steps.”  Fed up, his partner Liz Holt (Gia Carides) leaves him for another partner several weeks before the competition.  He tries to find a new partner, and is drawn toward Fran (Tara Morice), who had no experience in ballroom.

She does have experience in dancing, however, and introduces some new – and unconventional -- steps to Scott.  But the steps are not strictly ballroom, and Scott wonders if he’s made the right choice.

While the arc of the story is hardly new, but the movie is fascinating from start to finish.  Luhrmann’s style is distinct even in his first time:  quick cuts, visually striking people, and a general operatic style.  The movie originated from a stage play written by him when he was a student, and went through several incarnations before becoming a film’'; Luhrmann insisted he direct.

From this, he went on the direct Romeo+Juliet, a brassy and wonderful Shakespeare adaptation.**  Next was Moulin Rouge, a bravura tragedy.  All three films share the same operatic sensibility.

Luhrmann made movies more sporadically, concentrating on theater and opera.  His Australia is a overlong epic*** and Great Gatsby was a modest success.

But this is where he began, and it clearly showed a strong visual sensibility coupled with some high drama.

**One of the few that figured out to improve on the original.  In Shakespeare, Romeo discovers Juliet is dead and drinks poison in his grief.  Juliet wakes up a few minutes later.  Luhrmann changed the play so that Juliet wakes just as Romeo is dying; he sees her face before the poison fully takes hold.  Far more dramatic.

***Almost a double feature: one movie takes two hours, and the second one takes another hour.

Posted by Chuck Rothman at 9:25 PM No comments:

One thing I like about SiriusXM in my car is being able to listen to the old time radio channel.  Most of the comedies don’t hold up that well (especially sitcoms), but there are dramas that still work well, notably Gunsmoke and Dragnet. But perhaps the best of them all was a show I had never heard of before, even though it lasted longer than just about anything else:  Yours Truly, Johnny Dollar.

The show premiered in 1949, with Charles Russell in the title role.*  Johnny Dollar was an insurance investigator, “the man with the action-packed expense account.”  An early quirk was that he tipped everyone a dollar, a big tip back in those days when a cup of coffee was a dime.**  Each week, he’d be sent out from the home office to investigate a case.  The conceit was that he was dictating his expense account and describing each expense as a well of telling the story of the case.  Episodes would begin with Dollar picking up the phone and laying out the situation.

The show was a half hour long, and was pretty routine, and barely different from other detective shows of the time.  It went off the air in 1954.

It got a second life the next year in a slight different format.  Instead of a half-hour, the time was cut to 15 minutes – five days a week.  This allowed for longer and more complicated storyline.

But the best thing about the show as Bob Bailey, who took over as Johnny.  Bailey was just perfect – cynical and self-aware, ready with a wisecrack or a gun.  The dialog is crisp and clever, and the adventures draw you in.***

By the end of 1956, the show went back to a weekly half hour.  Radio drama was dying by then, but Johnny Dollar continued.  Bob Bailey left the show in 1960 because CBS wanted to move production to the east coast and he didn’t want to move.  Bob Readick took over, and eventually gave way to Mandel Kramer, who stayed to the end.  The show was one of the last regular radio dramas on the air.

If you don’t get SiriusXM, many episodes are available at archive.org.  Give them a listen.

**This was quickly dropped.  His expense account may have been action-packed, but the company auditors didn’t like that sort of action.

***I’ll often listen to episodes even though I know I won’t catch the ending, just to hear the dialog.

Email ThisBlogThis!Share to TwitterShare to FacebookShare to Pinterest
Labels: radio

Ian Dury and the Blockheads (music) 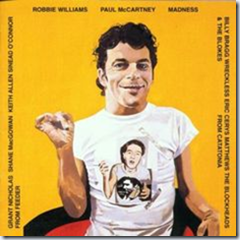 Rock and roll stardom is fickle and sometimes the most surprising people taste it.  Ian Dury was one of those.  He was a major name in late 70s UK (and in US New Wave circles), and his path was different to say the least.

Dury was born in the UK in 1942 and moved around during most of his childhood.  When he was seven, he contracted polio and spent a year and a half recovering.  In 1971, he formed his first rock group, Kilburn and the High Roads, a part of the Canterbury progressive music scene.*  They toured with the Who and put out a couple of albums to critical success and public apathy.

Looking for work, Dury joined up with a group of friends to form the Blockheads, whose first notable single was “Sex & Drugs & Rock & Roll” in 1977.  The song was controversial, but it made the group’s reputation.  Their album, New Boots and Panties was a major UK hit.  Their next single “What a Waste” made the charts, and Dury’s insanely catchy “Hit Me With Your Rhythm Stick” made #1.

Dury and the Blockheads toured Elvis Costello, Nick Lowe, and other names of the New Wave scene.  His album was released in the US to disappointing sales.

Dury was a master lyricist, even when his lyrics were goofy.  Most of the music was written by Chaz Jankel and borrowed from jazz, music hall, rock, and rap.  He also had a minor acting career, with

He was never afraid to let people know about his bout with polio.  In fact, his record company was appalled at the video for “Rhythm Stick,” since you can clearly see how the disease affected his musculature.  At the time, though, not many noticed and Dury was glad that they did.  He later got in trouble with the BBC with a song about being disabled, but he was fearless in promoting it.

Dury’s time at the top was short.  When the New Wave became passe, he broke up with the Blockhead and tried new things, to only minor success.  He would occasionally get the Blockheads together.  He died in 2000 of cancer.

*Canterbury was a hotbed of progressive rock in the late 60s and early 70s; most of the hardcore groups of the era originated there:  Soft Machine, Caravan, Gong, Hatfield and the North, and National Health (the five groups in the center of the scene), plus the Wilde Flowers (originator of the scene), Camel, Egg, Henry Cow, Matching Mole, and others.  None had any notable hits in the US, but considering their mix of jazz, rock, fusion, and avant-garde music, hits were unlikely.