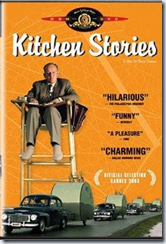 One of the points of the Heisenberg Uncertainty Principle is that an observer affects the actions of what he’s observing.  But this applies to things in addition to nuclear physics: one of the first illustrative examples I read about it talked about a survey taker in a country with only one person.  And it has never been better or more charmingly illustrated in Kitchen Stories.

The film is set in Norway in 1950.  A few years earlier, Swedish scientists observed how Swedish women used their kitchens, observing them in order to find ways to make work easier.  Now, Folk Nilsson (Tomas Nordstrom) is sent to Norway to gather data about men use their kitchens, notably the kitchen of Isak Bjorvik (Joachim Calmeyer).  Nilsson’s rules are clear:  observe and don’t interact with the subject.  So he set up a lifeguard chair in Bjorvik’s kitchen, climbs up there each morning, and observes. 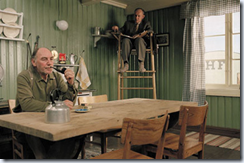 The concept is, of course, silly in the extreme.  No one would ever think that anyone would grow used to having a guy in a tall chair watching him cook dinner, eat, set mousetraps, and go for a midnight snack. But the silliness is played very straight by the actors, and that’s the basis for the film’s success.

And, as should be obvious, the observer and observed slowly begin to interact.

This is a type of European-style comedy, where the humor comes from small, surprising, and extremely human reactions.  There is little conversation* and everything is told via how the two characters start to react and change in each other’s presence.  There are plenty of little laughs, and laughs for the best possible reason:  it shows human beings reacting to life.

*A point most US audiences will miss is the fact that Nilsson speaks Swedish while Bjorvik speaks Norwegian.  The languages are close enough for the other to understand, but they both stick to their own.

The Pirates! Band of Misfits 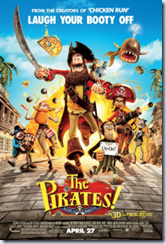 Gideon Davoe
Starring (Voices of): Hugh Grant, Martin Freeman, Imelda Staunton, David Tennant, Jeremy Piven, Salma Hayek, Lenny Henry, BRIAN BLESSED.
IMDB Entry
Pixar may get all the publicity and box office smash, but for my money, Aardman Animations* is the sure thing when going to see a great animated films.  Their movies are not as successful.  Pixar makes films for all ages to enjoy; while Aardman makes films for grown-ups, so kids may not get the subtleties.  But Aardman’s output, though small, is consistently great.
Their most recent was The Pirates! Band of Misfits.**  Adapted from a children’s book, it’s about the Pirate Captain (Hugh Grant) and his crew, who all agree the best part of being a pirate is Ham Night.  The Captain wants one thing, though:  to be named Pirate of the Year.  In the course of his inept attempt at capturing enough booty to win the crown from
Black Bellamy (Jeremy Piven), Cutlass Liz (Salma Hayek), and Peg Leg Hastings (Lenny Henry),*** he stumbles across the ship Beagle, and Charles Darwin (David Tennant).  He recognizes that Polly, the Captain’s parrot, is actually a Dodo and convinces him to sail to London**** to win an award from the Royal Society and from Queen Victoria (Imelda Staunton), who hates pirates.  His second mate, the Pirate with the Scarf (Martin Freeman) is suspicious of Darwin’s motives, and the motives of Darwin’s pet ape, Bobo. 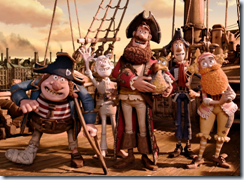 Like many other Aardman films, The Pirates! is animated in stop motion.  The main advantage of this is that it gives a sense of reality to the characters.  They aren’t just ones and zeros; they have a physical presence that still can’t be duplicated by computer animation.*****
But the fun isn’t the technique, it’s the story and the quirky characters and small subtle moments on the periphery.  Everyone, even the nonspeaking characters, have real personalities and there are dozens of small jokes and running gags that you have to pay attention to spot.
The movie did only a middling box office.  That’s a shame.  If you’re a fan of animation, pirates, and comedy, go see it.
_____________________________________________
*A few years ago, I was a a theater and the preview started out “From Aardman Animations.”  I immediately said, “Nick Park!” and knew I was going to see that movie.  Turned out, it was Chicken Run.
**UK title:  The Pirates! An Adventure with Scientists.  I like that one better.
***All three, plus BRIAN BLESSED lend their names to the credits but only appear in a very small portion of the film.
****To the tune of “London Calling.”  The song choice had me in hysterics that I couldn’t explain to my wife, since she doesn’t know the song or anything about the Clash.
*****There is some computer animation in the film, but only on backgrounds and effects, not on any of the characters,