The Private Life of Sherlock Holmes 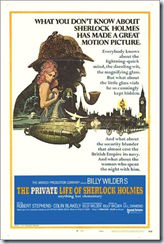 Long-time readers of this blog* might note I have a liking for Sherlock Holmes.  If someone does a version of the story, it’s likely I’ll be there.** But it did take me awhile to get to Billy Wilder’s 1970 version.  I had heard bad things about it, and just never got around to it until recently.

The Private Life of Sherlock Holmes stars Robert Stephens as the character and Colin Blakely as Watson.  The setup is the same as always:  Holmes and Watson sharing an apartment with their landlady, Mrs. Hudson (Irene Handl).

The movie consists of two stories.  The first has Holmes called by a Russian Ballerina, Madame Petrova (Tamara Toumanova) with a proposition that she father a child with her to get the best of brains and beauty.  What is interesting, and quite surprising given the time, is that Holmes gets out of her proposition by claiming to have a gay relationship with Watson, possibly not the first time this was suggested, but the first time it was portrayed on screen.  The idea was far more daring for its time then it would be today.

That over with, the movie moves on immediately to the case of a mysterious woman (Genevieve Page) who is found in the Thames and brought to Holmes to find her identity.  Her mystery, and the disappearance of her husband, for the bulk of the film.  It’s really more of a spy film than a mystery, as everything turns out to be part of a secret project that enemy agents are trying to quash.

The movie is an odd duck.  It was evidently meant to have two more stories, one of which was actually shot but dropped from the final version. It’s also strange that the first story is completely dropped, even though elements introduced as a sideline to it turn out to be important to the main story.  It’s certainly not the type of script that Billy Wilder and his long time writing partner, I.A.L. Diamond were capable of. It marked the beginning of Wilder’s decline; the movie got so-so reviews, as did three of his last four film.***

But the movie has its moments:  Watson’s discomfort at being thought gay, and Genevieve Page as a woman who manages to outdo Irene Adler as a love interest.  The dialog is also Wilder and Diamond’s high level, enough so that it makes up for the un-Holmesian plot. And Stephens and Blakely make a fine Holmes and Watson.

It’s a worthwhile addition to the many Sherlock Holmes films.

**I hadn’t heard the the BBC was doing a version of the story.  My wife just  happened to catch the opening credits and called me in; I fell in love with it.

***Only The Front Page had critical success, because it was the first accurate adaptation of the play (with the final line intact) and because Walter Matthau was born to play Walter Burns. 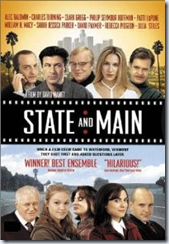 In memory of Philip Seymour Hoffman.

David Mamet is best known for for his serious films and plays, especially the brilliant Glengarry Glen Ross.  But in 2000, he tried his hand at comedy.  The result, State and Main is uneven, but entertaining overall.

The movie is about a favorite subject of filmmakers – the madness of making a movie.  The production of the new film, The Old Mill, has to suddenly relocated into Vermont and State and Main shows the havoc it causes.  The film’s director, Will Price (William H. Macy), tries to keep things going, though he has a slight setback when he discovers the town doesn’t have an old mill.  He leaves it up to screenwriter Joseph Turner White (Philip Seymour Hoffman), who gets stricken with massive writer’s block.  In the meantime, Clare Wellesley (Sarah Jessica Parker) suddenly decides not to do the nude scene she had agreed to do and leading man Bob Berringer (Alec Baldwin), whose eye for underage women got the kicked out of their last location, is smitten with local teen Carla (Julia Stile), who knows exactly what she wants.

The cast is certainly a good one.  Most of the actors probably jumped at the chance to work with Mamet.  And while the result may not have been typical Mamet,*  it also has plenty of laughs with a lot of farcical notes. 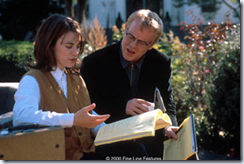 Philip Seymour Hoffman shows his incredible range by playing White, a man filled with self-doubts, but also very funny and charming as he builds a relationship with Ann (Rebecca Pidgeon), the town bookstore owner. People are rightly praising Hoffman after his tragic death this week, but little of the praise mentions his ability to do things like light romantic comedy.

The movie did only so-so in the box office and probably didn’t make back its budget.  Mamet returned to what he was best at – dramas filled with brilliant dialog about men and double crosses.  The rest of the cast continued with their successes.

Posted by Chuck Rothman at 7:29 PM No comments: