It Happened on Fifth Avenue 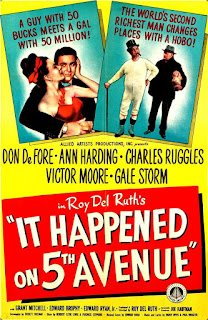 Titles are an art. You need to come up with something that’s both memorable and intriguing. It Happened on Fifth Avenue is not an inspiring name for a film, but the result on the screen is a charming little movie.

Aloysius McKeever (Victor Moore) has a sweet setup. Though homeless, he spends his winters in the mansion of Michael O’Connor (Charles Ruggles) when O’Connor boards it up to spend winters in North Carolina. Jim Bullock (Don DeFore) is a war veteran who loses his apartment when O’Connor buys it to tear down to put up an office building. Jim runs into Aloysius, who invites him to enjoy the mansion with him. Meanwhile, O’Connor’s daughter Trudy (Gale Storm) lets herself into the mansion after running away from finishing school. Jim and Aloysius find her and think she’s trying to squat there. Trudy is attracted to Jim, so doesn’t reveal her identity, since Jim hates her father for putting him into the cold. Jim meets a couple of war buddies Whitey (Alan Hale, Jr.) and Hank (Edward Ryan), who join the crew.

Trudy’s father finds her, but she convinces him to pretend to be homeless, too, because Jim would hate her if he knew she was the daughter the man who evicted him.  He joins the crew, as does Trudy’s mother Mary (Ann Harding), who has divorced her father because he was too devoted to making money.

The movie is light and charming and has something of a Christmas theme. You could make a case that Aloysius is Santa Claus, and, in many ways, O’Connor is Scrooge.. One thing I liked about it was that it resolved comic misunderstandings in the situation without dragging it out.

Victor Moore is quite charming. He was a fairly solid star on Broadway before going into films as a career; this is one of his bigger roles. Don DeFore is best known as Mr. Baxter in the 50s sitcom, Hazel. I remember Gale Storm fondly from the TV shows My Little Margie and The Gale Storm Show (Oh! Susannah). And Charlie Ruggles was a successful character actor for years.

There are quite a few familiar faces in the movie. John Hamilton (Perry White in The Adventures of Superman) has a few lines, and the great Charles Lane shows up as a prickly landlord. Alan Hale, Jr. is probably best known as the Skipper on Gilligan’s Island.

Director Roy Del Ruth was one of the top directors of the 30s and early 40s.

The movie has an interesting production history. It was originally planned by Frank Capra as the inaugural film for his Liberty Pictures, but he dropped it when he saw the script to It’s a Wonderful Life. He sold the rights to Monogram Pictures, a poverty row studio best known for B pictures and westerns.Monogram was trying to improve its reputation and created Allied Artists, making It Happened on Fifth Avenue their first production. It was successful enough to Monogram to eventually rename itself.

The movie was nominated for a best Writing Oscar, but lost to Miracle on 34th Street. The complications of syndication kept it off TV screens for years, but it came back recently.

It’s worth seeing out. It’s not quite a Christmas classic, but it is a very good film.

Posted by Chuck Rothman at 10:11 PM No comments:

Beyond the Fringe (theater) 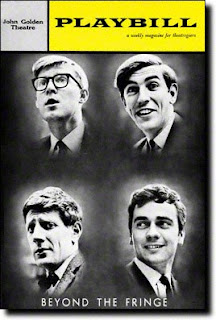 Beyond the Fringe may be the most influential thing I’ve talked about in this blog. It revolutionized British comedy. Without it, there would be no Monty Python, for instance.

The show is a sketch comedy written by the performers. It resembles Python with the absurdity and intellectual depth of the sketches, and also showed a penchant for discussing current events. Much of this is commonplace now, but back in 1960, there were few things that were like it.

Most of the sketches had been used in small revues and college productions. The four writers gathered together the most  successful of their writings and put it together into an evening of theater.

Dudley Moore is probably the most famous of the group. He became a movie star with roles in 10 and Arthur, making him famous all over the world. He also was a first-class pianist* and played music for the revue.

But it is Peter Cook who is recognized as being a genius of comedy. He wrote many of the sketches for the show, and UK sketch comedies are in aw of him. His main talent was his deadpan delivery of mundane lines where he managed to make everything funnier – even lines that were funny to begin with. After the show, he worked as a partner with Moore, and is at his best as the Devil in the original Bedazzled. He was also with Moore in The Wrong Box, where he gets to play off Peter Sellers.

But his movie career never gained notice. Partly because he was a genius at sketch comedy and wasn’t quite the same when he was using other people’s dialog. The only role most people are aware of is his small bit as the vicar trying to run the marriage ceremony in The Princess Bride.

The other two members of the cast also went on the stellar career.  Alan Bennett found his niche as a playwright and won a Tony Award for The History Boys. Jonathan Miller produced and directed several plays as part of the BBC Shakespeare project and directed plays for Broadway.

Posted by Chuck Rothman at 6:03 PM No comments:

Email ThisBlogThis!Share to TwitterShare to FacebookShare to Pinterest
Labels: Broadway

Kevin Can F**k Himself (TV) 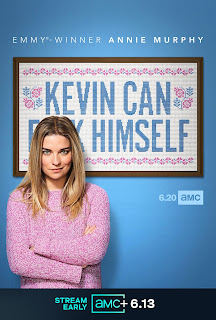 Back in the 60s, the gimmick show was king with things like My Mother the Car, Bewitched, The Hathaways*, and others. The concept faded, as the gimmicks were more silly than actual humor. But any genre can be revived, if they know how to handle the genre,  and Kevin Can F**k Himself** shows that you can create compelling TV with the right gimmick.

Allison McRoberts (Annie Murphy) is married to her boorish husband Kevin (Eric Peterson), who takes her completely for granted and is oblivious to her feelings. His father Peter (Brian Howe) and her brother Neil (Alex Bonifer) make her the butt of their unfunny and broad jokes. The setup is much like the man-child husband and smart wife formula for shows like Kevin Can Wait, Everyone Loves Raymond, According to Jim, and that ilk. Allison is stuck in a very bad sitcom.

But once she gets away from Kevin and his friends, it’s a different story. The show turns into a semiserious drama about Allison being at the end of her rope. When a man dies in the town library of fentanyl overdose, she realizes that a way to commit the perfect crime and free herself. With the help of her best friend Patty (Mary Hollis Inboden), she begins to plot the murder. In the meantime,her old high school sweetheart, Sam  Park (Raymond Lee) has returned to town to run a diner – and the flame is rekindled despite the fact he’s married.

The gimmick is how the two parts of her life are shot. When she’s with Kevin, it’s a standard three-camera sitcom – limited sets, and a set up like a filmed play. But when Allison is on her own, it’s a one-camera show, set up like a movie. The switch is a clever idea to show the sitcom world vs. the real one. 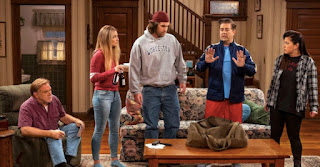 Allison is not a nice person.*** She holds our sympathy because we see how badly Kevin treats her. Murphy does a terrific job keeping us on her side even when she’s at her most manipulative.

Eric Peterson’s Kevin is also a tightrope act. He is a lout, but manages to play it so that he doesn’t turn you off completely and, to his credit, tries to do better for himself (though never recognizing how badly he treats Allison).  Mary Hollis Imboden is wonderful as the wisecracking best friend who has problems of her own.

After a cliffhanger, the show was renewed for a second season, which will be a final one. I think it’s a great idea not to continue further; the situation just isn’t sustainable over a long run. But what’s there is fascinating to watch.

***None of the characters are. 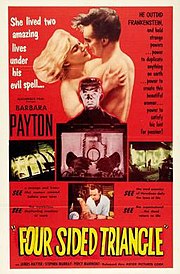 Not all  50s science fiction involved monsters. There were some examples that dealt with the possibilities – good or bad – of technology. The Four-Sided Triangle is an example of this.

Bill Leggat (Stephen Murray) and Robin Grant (John Van Eyssen) were close childhood friends, who both get childhood crushes on Lena Maitland (Barbara Peyton). Grown up, Lena falls for Bill, leaving Robin the odd man out, and Robin is deeply disappointed. He and Bill are are scientists, developing the Reproducer, which can make exact duplicates of anything.

I liked the situation, but also the way it avoids the clichés of the genre. In most movies of this vintage, Helen would go horribly wrong. It does from Robin’s point of  view, but no monster is created.

It’s an intriguing situation and an entertaining movie.