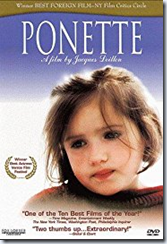 Child actors in American films are often problematic. There is a tendency to make them precocious or stagy, removing any sign of the natural. Non-Hollywood films, though, often find ways to get strong and natural performances from children, and one of the best examples of this is Ponette.

Ponette (Victoire Thivisol) is a four-year-old girl whose mother dies in a car accident. She goes to live with her aunt, who later sends her off to boarding school. Ponette is too young to understand the concept of death and keeps looking for her mother to return. Other children are helpful and cruel in addressing her hopes.

The movie succeeds on the performance of Thivisol. She was only four when the film was shot and is just wonderful. Her search for her mother is filled with pathos and is mesmerizing.

Thivisol was nominated and won several acting awards for the film. There was some complaints – can we really call what she did on the screen “acting”? – but that doesn’t matter.  The result is a sad a beautiful film about moving on.