(Bacheha-Ye aseman) (1997) Written and Directed by Majid Majidi
Starring Amir Farrokh Hashemian, Bahare Seddiqi
IMDB Page
Iran is not exactly a world cinema power, so saying that a movie is the best movie to come out of the country is pretty faint praise. Nevertheless, Children of Heaven ranks up with the output of any country's cinema. It's a fairly simple story. Ali (Amir Farrokh Hashemian), a young boy living in Tehran, takes his sister Zahra's (Bahare Seddiqi) shoes to be repaired, and on the way back, loses them. This is a disaster: their family is too poor to buy new shoes. In order to keep the loss a secret from their parents, the two children form a plan: the will share. Zahra will wear the shoes to school in the morning, then give them to Ali to wear to school in the afternoon. 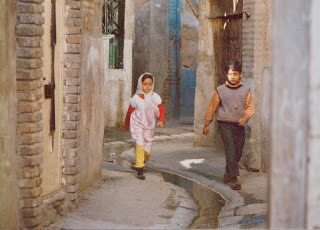 Of course, there are complications in trading off the shoes and trying to keep the secret. Then Ali discovers there will be a footrace. Third prize is a pair of shoes, so Ali enters. This sets up a race result that unlike anything in American films that show competition, and a truly beautiful moment.

The two young actors in the film are just wonderful. Their performances are absolutely real, without any sign that they are acting at all. Director Majid Majidi makes everything about the movie look fresh. It may be a different culture, but the issues facing everyone are the same.

The film got an Oscar nomination for Best Foreign Film, but lost to Life is Beautiful.

Majidi has become the top Iranian director, both on the strength of this and of other films he's been making. It's a great look at childhood, poverty, and love.