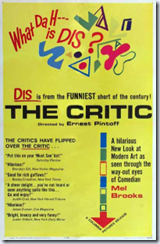 I really don’t have to say that Mel Brooks is a comic genius.  His films are classics, including the first film he ever appeared in, the Academy Award winning The Critic.*

The movie – an animated short subject -- starts with a bunch of abstract designs and a chirpy harpsichord playing the the background.  About 30 seconds in, you hear Brook’s voice** chiming in with “What the hell is this?”

Brooks continues to comment on what is shown on the screen, mystified and disdainful as he tries to puzzle out the meaning of the abstract designs in front of him.  A couple of people tell him to be quiet, but he defends his right to talk about what is happening.

The entire thing was ad libbed.  Brooks, inspired by seeing an old man doing the same thing in a theater, told director Ernest Pintoff to make a film, but not show it to him until he was in the studio.  Brooks manages to be incredibly funny, partly because what he describes really matches what we’re seeing in a unexpected way.  His way of speaking also adds to the humor.

Director/producer Ernest Pintoff had already gotten an Oscar nomination for an animated short subject,*** which may be one reason Brooks chose him.  The film won this time, though Brooks would have to wait a couple of years until getting his own statuette for The Producers.

The film is short and sweet and incredibly funny.  Click on the link and prepare to laugh.

**Far more familiar now than when the movie was shot, of course.

Posted by Chuck Rothman at 5:02 PM No comments: 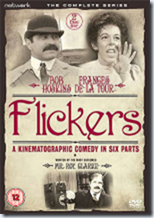 (1980)
Directed by
Cyril Coke
Written by Roy Clarke
Starring Bob Hoskins, Frances de la Tour
IMDB Entry
As you can guess from seeing the topics on this blog, I’ve always loved movies, and also movies and TV shows about making movies.  And, even though I rarely watched Masterpiece Theater at the time, I was glad to catch Flickers.
The six-part series featured the story of Arnie Cole (Bob Hoskins), a small-time nickelodeon operator in 1910 who wanted to produce films in his own hteater.  He’s a lower class guy without much money, and when he’s introduced to Maud (Frances de la Tour), who’s rich and too snobbish for his taste, he realizes that she could help fund him.  But Maud, who is no beauty, gets pregnant and needs a father for the child, so the two reluctantly marry.
The series covers a lot of the clichés of filmmaking of the era, but the true joy is watching the two leads.  Hoskins has always been an amazing actor and in this role, his blustery persona is the perfect foil for Maud.  Frances de la Tour* is an accomplished farceur and gives as good as she gets, but also shows a vulnerability that brings a lot of charm to the entire enterprise.
The series was written by Roy Clarke, who later became major success in Britcons, creating and writing Keeping Up Appearances and The Last of the Summer Wine.
The show was enough of a success to spawn a thematic sequel, Pictures, though with none of the same cast.  It was set about ten years later, as the characters tried to make it in the movies.  Though far less successful, the most amusing moments were provided by an actor playing the representative of a Hollywood studio.  The character was supposed to be Jewish, but the way he said “Oy Vey” – in a way no one has ever said the phrase – was a joy to behold.
Flickers had a release on VCR, but nothing on DVD.
______________________________________________
*Currently chewing the scenery with Ian McKellen and Derek Jacobi in Vicious. 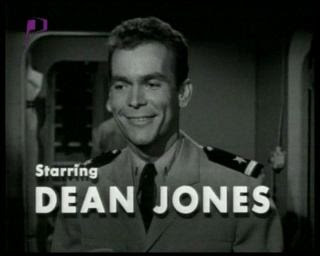 In Memory of Dean Jones.

TV in 60s, for all the reputation of the era, had a surprisingly large number of service comedies.  Gomer Pyle, USMC is the best known today, but there was also Broadside, The Wackiest Ship in the Navy, McHale’s Navy, No Time of Sergeants, and Operation Petticoat. It was partly a hangover from the Cold War; many US men were drafted and spent two years on military bases, pretty much bored the whole time.  One of the lesser-known shows in the genre was Ensign O’Toole.

The show was aboard the USS Appleby, a typical ship of the pre-Vietnam era, and the antics of its crew, most notably O’Toole (Dean Jones).  In a way, O’Toole ran the ship, using his charm and wit to get what he needed or to fix situations for others.*  Others in the crew were CPO Homer Nelson (Jay C. Flippen), a long time veteran; Lt. Cdr. Virgil Stoner (Jack Albertson), who ran the ship** and who knew something might be going on, but was willing to overlook things to the good of morale; Lt. Rex St. John (Jack Mullaney), who was a by-the-book and ambitious sailor who was something of a foil for O’Toole; and Seaman Gabby Di Julion (Harvey Lembeck), a troublemaker.***

The stories were usually slight, with misadventures and mistaken identity.  They were held together by Dean Jones’s charm and charisma, as well as his understated performance.

Two other things impressed me as a kid:  The name of the show was spelled out in Morse code by a signal lamp, and each episode title was named “Operation:  something.”

The show only lasted a season and was canceled due to low ratings.  But Disney evidently saw something in Jones and started casting him in films soon afterward.  But I always remembered him as the cool and collected O’Toole.

**The captain was never shown.

***Lembeck was a strong comedy presence in the 50s and 60s, playing one of the prisoners in Stalag 17, a role he originated on Broadway.  He did time on the Phil Silvers Show and also appeared in many of the Beach party movies as biker Eric Von Zipper.