All Creatures Great and Small (TV) 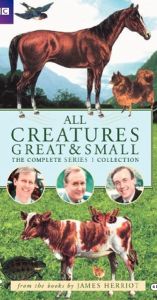 James Herriot* was a veterinarian in Yorkshire, UK for many years. After her retired, he started writing and, after numerous failures, he moved on from fiction to write about his experiences. The first book, If Only They Could Talk, was a a minor success, and when it was packaged with a second It Shouldn’t Happen to a Vet, under the new title All Creatures Great and Small, it was a best seller and was turned into a TV series by the BBC.

The show relied heavily on Herriot’s stories, usually dramatizing a couple of them. The strength  of the show was in the characters, not just the main one, but the many people who needed help for their animals. Heriot was not just dealing with dogs and cats, but with farm animals like cows*** and sheep and pigs, often in situations where the health of the animal was vital for the farmer to earn a living. There were also comic sidelights such as Mrs. Pumphrey and her spoiled Pekinese Tricki-Woo.

Christopher Timothy was just fine as Herriot – smart but sometimes a bit awkward, especially compared to the blustery Siegfried, where Robert Hardy was wonderful.

The show continued on and off until 1990, until Heriot’s stores were exhausted.. Hardy continued to work for years, most notably in various shows as Winston Churchill. And of course, Peter Davison became a legend by taking on the role of Doctor Who after Tom Baker retired.****

**The role was recast after the third series.

***One of the most memorable things was the fact that Heriot or the Farnams would have to put their arms into the rear of a cow, something that was done without any trickery.

****I remember a clever piece of fan fiction where the Daleks landed in Yorkshire and spotted the Doctor. And then realize they could exterminate Winston Churchill.

Posted by Chuck Rothman at 10:11 PM No comments: 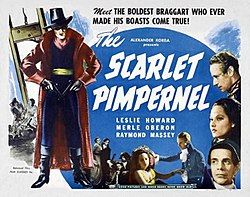 I’ve written before about how much I enjoyed the writing of Baroness Orczy, but that has been a strictly literary admiration until now. It was inevitable that her best-know literary creation would be made into a film. Several silent films were made, but the first sound version was made in 1934 as The Scarlet Pimpernel.

The story was well known.* The Scarlet Pimpernel was the first character to use a secret identity, and he was a major influence on Bob Kane and Bill Finger when they created Batman. He helped victims of the French Revolution to safety in England along with the a group of twenty other English aristocrats who work with him.

He’s revealed to the audience to be Sir Percy Blakeley (Leslie Howard), a silly fop whose biggest interest is lame jokes and making sure other people tie their cravats properly. He is despised by his wife  Lady Marguerite Blakeley (Merle Oberon), who fantasizes about the Scarlet Pimpernel.** Meanwhile, the sinister French ambassador Chauvelin (Raymond Massey), plots to discover who the Pimpernel really is, and blackmails Marguerite to be his spy. Blakeley reveals he has a love/hate relationships with his wife after he hears she betrayed someone to the guillotine.

The movie is extremely faithful to the book. This isn’t surprising, since the Baroness wrote the script. The opening scene of the novel – one of the cleverest bits of derring do in literature – is portrayed almost intact, as is the scene where Chavelin first tries to trap the Pimpernel in a drawing room. The ending seems to have changed a bit – in the book, Lady Blakeley plays a bigger role – but is still first-class adventure. 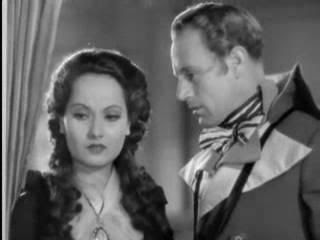 Leslie Howard was an excellent choice for Blakeley,*** switching easily from heroic to foppish as needed.  Merle Oberon portrays Marguerite perfectly, bringing out her vulnerability and also her intelligence and ultimate bravery. The story is as much a love story as an adventure, and the relationship between Blakeley and his wife is well played.  Raymond Massey is fine as the sinister and manipulative Chavelin.

Nigel Bruce – best known as Doctor Watson  to Basil Rathbone’s Sherlock Holmes – was something of a surprise. He looked a little different when he was younger; it was only his voice that gave him away.

The movie was a success and gives a surprisingly good example of how a great book could become a great movie.

Posted by Chuck Rothman at 8:49 PM No comments: