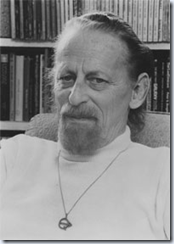 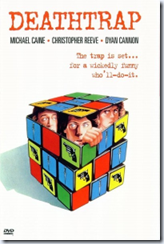 Plot twists are a mainstay of classic mystery fiction.  And occasionally, there’s a work that’s nothing but plot twists.  One of the best examples of this is Deathtrap.

Sidney Bruhl (Michael Caine) is a playwright fighting off a string of Broadway flops.  Desperate for success, he gets a manuscript titled Deathtrap, from a former student, Clifford Anderson (Christopher Reeve).  It’s brilliant and Sidney thinks on stealing the manuscript and taking credit for it* and invited Clifford to their house.  Sidney’s wife Myra (Dyan Cannon) is uncomfortable with the idea, stressing her already weak constitution.  And a mysterious psychic, Helga ten Dorp (Irene Worth) shows up at the house, and complicates matters.

I can’t really discuss much of the plot; the fun is watching it unfold.  It has more twists than a mountain road, and most of the fun of the film is to follow them.

The movie was based on a play by Ira Levin** and directed by Sidney Lumet, who is best know for more serious work.  It’s often compared to Sleuth,*** though it’s different in many ways, lacking the cat and mouse games that made Sleuth successful.

Caine gives his usual excellent performance, while Reeve, trying to shed his association with the Man of Steel, shows that he’s more than just a superhero actor.

The movie was a moderate success.  One thing that hurt it was something that occurred that was very notable in film history, but which gave away one of the twists, and also kept audiences away.****

Still, if you’re looking for a light thriller with plenty of surprises, Deathtrap is a good choice.

**Author of Rosemary’s Baby, The Boys from Brazil, and many other successful thrillers.

***Caine starred in the movie version of that (twice).

****Highlight text below to display
A passionate kiss between Sidney and Clifford.

Posted by Chuck Rothman at 9:58 PM No comments: 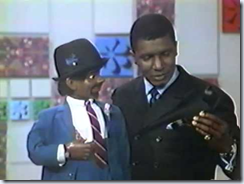 Posted by Chuck Rothman at 10:33 PM No comments: 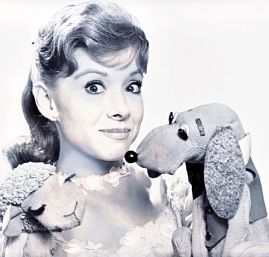 As my past few posts have shown, the 1950s was a great time for ventriloquism.*  Shari Lewis was another of the greats of the time and the art, and ultimately continued her act into the 1990s, becoming an honored name in children’s programming.

Lewis was born Sonya Hurwitz in New York city, daughter of a former professional magician who encouraged her career in show business.  She also picked up ventriloquism, and won a first prize on Arthur Godfrey’s Talent Scouts, launching her career.  In 1960, she was given her own children’s show by NBC.

Lewis was different in that she used puppets instead of dummies.**  The most famous one was Lamb Chop, a sock puppet lamb who was utterly charming.  Others of her characters included the shy Hush Puppy, the slow-on-the-uptake Charlie Horse, and Wing Ding, a crow.***

The show ran until 1963, and Lewis moved on to other projects.  The 60s was not a good time for ventriloquists.

But Lamb Chop made a comeback in 1992 with Lamb Chop’s Play-Along on PBS in 1992.  It introduced here (and Shari) to a whole new generation of children, and won several daytime Emmys.  And you can now start singing the song that doesn’t end…..
____________________________________________
*And puppets in general.
**I notice now that one advantage of hand puppets is that they can be held in front of you to block the view of your mouth, so it was harder to see your lips.  Lewis didn’t need this particular trick – her technique was fine – but it was interesting to notice.
***She later dropped Wing Ding from the act; the idea of a black crow probably was at least borderline offensive, though Wing Ding was never used for racial laughs.