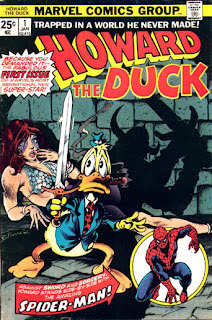 George Lucas has a lot of answer for. Sure, Star Wars was a great movie, but its success put an end to the age of films for grownups. Hollywood saw that the key to big bucks was to make films for teenage boys, and that's all too often what we're stuck with.

And then there's Howard the Duck.

All anyone remembers is Lucas's movie. The film was a critical and financial disaster (not quite as bad as some say -- so eventually people may start talking about it positively -- but still no great shakes). It is the target of jokes and gives everyone the impression that the comic was no great shakes, either.

Howard was really intended to be a one shot. Steve Gerber needed an interesting visual for a story he was writing for the comic book Man-Thing (we were so innocent back then . . . ), so he came up with Howard, a cigar smoking, pistol-packing duck from another dimension. Howard caught on quickly and was soon rewarded with his own title.

Gerber soon was able to let his penchant for weirdness to take over. Howard was often the only sane creature in the situation, as he was faced with madmen, super villains, and assorted strangeness, meanwhile trying to do the mundane tasks of earning a living trapped in a world he never made. He was aided at first by Beverly Switzler, a beautiful redhead, and came up against his nemesis, the Kidney Lady (who thought Howard was out to steal her kidneys).

The stories ranged all over the place. Howard ran for president (with the All-Night Party), suffered a nervous breakdown (where he was visited by the rock group KISS), and generally had crap thrown at him, as he tried to wisecrack his way out of it. There were nice plot twists, like when Beverly was forced to marry the villain Dr. Bong -- and decides she like him.

The strip was extremely popular. Issues of Howard the Duck #1 were selling for $60 or more. There was even a spinoff newspaper strip, probably the oddest newspaper strip this side of Zippy the Pinhead.

It didn't last, of course. Gerber (who was also editing the book, so he had free rein) began to miss deadlines, and the stories got stranger and stranger. He was fired; there were lawsuits, and book started losing its appeal. Eventually, it was switched to a black and white magazine, ostensibly to allow for stories without worrying about the Comics Code, but by that time, it had stopped being relevant.

Various other versions have been revived over the years, with limited success.

And then there was the movie. Now, if you mention Howard, that's all anyone will remember. That's a shame, because at its peak, the comic was among the best ever written, and something of a pioneer in pushing the envelope.

Posted by Chuck Rothman at 6:33 PM

As a tribute to Steve Gerber, I recently re-read the 'Howard' comics. I had forgotten how funny and brilliant they are! 'Master Of Quack Fu' even earned itself a fan letter from Stan Lee. As you say the later stories are not so good, but those early ones are up there with Marvel's greats. The movie's not bad either!

I still have all of the Gerber written Howards including his appearances in Man-Thing, and it is great stuff. I saw the movie opening night. I liked it than and I (unapologetically) like it now. It isn't a perfect adaptation, but neither are the Chris Nolan Batmans, God help us. I cheerfully bought the DVD. It certainly doesn't deserve the amount of stick it's gotten over the years.