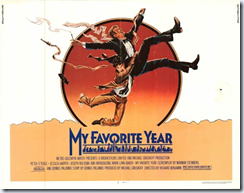 Live television was a new and exciting form of entertainment in the 50s, and the pressure and fun of putting on a show every week has rarely been shown on film.  My Favorite Year is a loving portrait of early television.

It shows Benjy Stone (Mark Lin-Baker), an intern on The King Kaiser Show.*  When the show books swashbuckling movie star Allan Swann (Peter O’Toole), they are faced with a problem:  Swann is a heavy drinker** and Benjy promises to Kaiser (Joseph Bologna) that he’ll keep him sober.  Naturally, the two men bond and, of course, disaster ensues.

O’Toole is magnificent as the larger-than-life Swann.  His declaration “I am not an actor!  I’m a movie star!” should be on anyone’s list of great movie quotes.*** He got an Oscar nomination for this, but, of course, didn’t win. Mark Lin-Baker is also fine as the starry-eyed but serious Benjy.

The film also captured the feel of doing a live show every week.  Mel Brooks, who helped produced, was a writer for Your Show of Shows, and Swann is based on Errol Flynn, who was a guest.  Several others involved with the show were also in the cast of the movie, notably Selma Diamond.

Director Richard Benjamin was best known for his acting roles and this was his first theatrical film.  Alas, his career never took off, and most of his credits were flops and critical disappointments.

**As was O’Toole, who managed to function and Sid Caesar, who, sadly could not.

***As his reply to the ladies room attendant when he stumbles in and is told, “This is for ladies only”:  “So is this ma’am, but every now and again I have to run a little water thought it.” 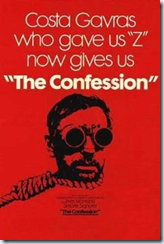 Costa-Gavras was one of the most political of all film directors, often basing him movies on real-life political events.  His movie Z was a condemnation of the Greek junta of the 1960s.  But Costa-Garvras hated repression in all forms.  Where Z was an attack on the right wing, The Confession did the same for a communist regime.

It’s the story of Artur Ludvik (Yves Montand), aka Gerard, who is a vice-minister of Foreign Affairs in communist Czechoslovakia.  He is suddenly arrest – for no reason he can think of – and thrown into jail.  Government agents harass and torture him to confess various crimes that probably were never committed.  Even his wife Lisa (Simone Signoret) begins to think he might be guilty.

The movie is taken from Artur and Lisa London’s account of Artur’s actual trial, where he was sentenced to life in prison.  It’s a harrowing movie, where one can see just how torture can break down a man into confessing anything.

The most memorable scene for me was toward the end.  Gerard had confessed and was being marched to his show trial, along with several others.  They are given back the clothes they were arrested in, but everyone has been so starved that they fit far too loosely.  One of the defendants has his pants fall down, starting a wave of laughter among the prisoners.  It’s a wonderful and fully human moment.

The movie is memorable (if for nothing more than the poster) and still has a lot of relevance today.

I’ve written before about foods that were no longer made, such as Regal Crown Sours and Screaming Yellow Zonkers.*  Usually, it was because the manufacturer was out of business and the recipe lost.  Mandarin Chocolate Sherbet was made by Baskin-Robbins, which is still in business and presumably knows the recipe.  Yet as far as I can see, it hasn’t been made in years.

It’s a shame.  The flavor has never been seen elsewhere.  It’s a dark chocolate sherbet with just a hint of orange, that you don’t notice until you swallow.  Despite the fact it’s somewhat light – sherbet instead of ice cream – there was a rich, dark chocolate taste that melts on the tongue.

There were many fans.  It was named the best Baskin-Robbins ice cream by Paul Passell and Leonard Ross and it deserves to be.  Yet even though it was discontinued years ago, there was no sign of them being willing to bring it back.

Which is a shame.  There was no other ice cream like it.