(1928 – )
Wikipedia Entry
Sometimes the key to a long career boils down one word.  Jimmy Nelson is the next in our parade of ventriloquists, one who was known for many years even without starring in his own show.  And that word was “chocolate.”

Nelson was born in Chicago and started on his path to success at the age of 10, when his aunt won a ventriloquist’s dummy in a Bingo game.  She gave it to the young boy, giving him a reason to learn how to throw his voice and, after turning professional at the age of 17, he quickly became a success, appearing on The Ed Sullivan Show in 1950 and became a regular on The Milton Berle Show.

Nelson’s main dummy was Danny O’Day, a fairly standard personality for a ventriloquist’s dummy – a wisecracking boy.  His second was Humphrey Higsbye, who was a departure from the usual second banana in a ventriloquist act:  instead of being somewhat dim, he was supposed to be a cultured intellectual.  Here’s a look of them on The Milton Berle Show:*

Nestle’s Quik was looking for a spokesman, and Nelson auditioned with Danny and Farfel.  The ad ended with the jingle sung by Danny: “N-E-S-T-L-E-S.  Nestles makes the very best . . . “  And Farfel joined in, adding “Chaaaaw-klit.”  At the audition, Nelson’s fingers slipped as Farfel finished the word, and the puppet’s mouth snapped shut audibly.  That was a beginner’s mistake, and Nelson thought he blew the audition.  But the company loved the snap, and he got the job. 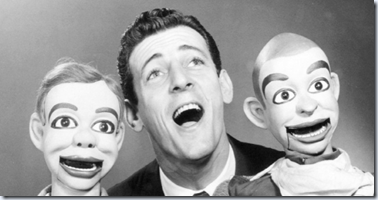 Paul Winchell was, for a time, was the most successful ventriloquist on TV. But he went on to a long career that went a long way from just pretending to throw his voice.

Winchell got his start in the way that millions of kids dreamed of:  he answered an ad for a ventriloquism kit from the back of a magazine. He did much more than most kids his age.  He asked his art teacher to create a dummy, and Jerry Mahoney was born.  Winchell and Mahoney practiced and managed to win first prize in the Major Bowes Amateur Hour, and turned professions when he was 14.

When TV came along, Winchell took Mahoney and a second dummy, Knucklehead Smiff, and became a TV hit.  The two were similar to Edgar Bergen’s Charlie McCarthy and Mortimer Snerd, though not as edgy. Mahoney was a wisecracker, and Knucklehead lived up to his name.

Winchell did add one innovation to the art:  Both Mahoney and Smiff had working hands – run by an assistant behind him screen.  This allowed them to pick up things and gesture, something that ventriloquists normally didn’t do.*  Winchell was also ambidextrous, operating Jerry with his left hand and Knucklehead with his right, allowing him to have both on stage at once.

A third character was Ozwald.  Strictly speaking, Ozwald was not a ventriloquist act.  Winchell would draw eyes and a nose on his chin, wear a mask/headdress that covered his head from the mouth on down, and have the camera turned upside down.**  The result was definitely weird.

Winchell was a major success, but by the 60s, ventriloquists were on the way out.  Luckily, Winchell was able to adapt his career as a voiceover artists.  Hanna-Barbara hired him first and he created characters like Dick Dastardly, Fleegle from The Banana Splits, and Gargamel from The Smurfs.  His best known voice role, however was Tigger in Disney’s Winnie the Pooh films.

And, as a sideline, Winchell helped develop an artificial heart.  In among everything else, he had gone to Columbia as a premed and worked with Henry Heimlich*** in the 70s in its development, being granted a patent for it.  It was never actually used and there’s some debate as to how much Robert Jarvik was influenced by Winchell’s work.  Winchell also patented some other inventions, though I’m not sure if any were manufactured.

He also developed a method of cultivating tilapia as part of a humanitarian push to help find new crops in developing worlds.

Winchell died in 2005.  His ventriloquism had been overshadowed by his other accomplishments, but he was a major talent in everything he tried.

* I suspect the technique was a big influence on the Muppets like the Swedish Chef.

**He used this technique for a second character, “Mr. Goody-Good.”  He often would show the audience how he created the character, putting on the makeup and hat and then telling the camera to turn upside down.  Even knowing how it was done didn’t ruin the illusion. 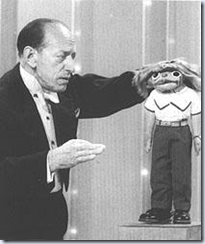 Ventriloquism is a difficult way to become a star.  Not only do you have to master the techniques of throwing your voice, but you have to be a first-rate comedian or else it’s just a gimmick.  One of the biggest stars of the art in the 50s and 60s was a Spaniard who did things differently from any other similar act:  Señor Wences.

He was born in Spain as Wenceslao Moreno and developed his act over there before moving to the US in the mid-30s.  He started out in nightclubs and by the late 50s, he was a regular guest on TV variety shows, most notably The Ed Sullivan Show, which is where he got his greatest fame.

Wences was not the usual ventriloquist.  Usually, there’s a dummy or puppet. Señor Wences didn’t need that sort of prop.  His main character, Johnny, was merely the side of his hand:  the thumb as the jaw.  Lipstick was used to draw the lips, two googly eyes were added, and a small wig was put on the top.  He rested his hand atop a model of a body and Johnny came to life.

But his most famous “dummy” was Pedro.  Pedro was a head in a box.  Wences would open and shut the lid and have Pedro speak.  The voices were slightly different, too:  when the lid was shut, the voice was muffled. Pedro soon created a catchphrase:  “S’allright,” spoken in his deep, gruff voice.

Often, Wences didn’t use a dummy at all.  Once he established Johnny and Pedro, he would leave them on the table and have them comment and talk back to him.  He could take out a telephone handset and pretend to take a call or would start spinning plates on a stick as Johnny and Pedro reacted.

His technical skill was first-rate.  Wences was able to have three and even four conversations, switching from Johnny, to his own voice, to Pedro, to someone on the phone, to Cecillia Chicken (a puppet) in rapid succession.  It was the rapid-fire switches that made the performance.  Indeed, Wences told very few jokes, but got his humor from the reaction of the characters.

After Sullivan went off the air, Wences continued to perform as a TV guest star and at clubs.  In the 80s, he convinced producers to give him a part in the touring company of the musical “Sugar Babies,” by telling the producers he was 15 years younger than he really was. He retired in 1996 at age 100 and died in 1999.