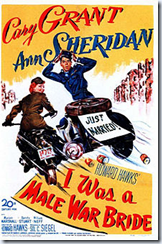 Posted by Chuck Rothman at 10:17 PM No comments: 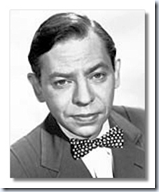 Some people are famous for being famous. That was how I first noticed Oscar Levant in the 60s, most notably from the title of his autobiography, Memoirs of an Amnesiac. All I knew was that he seemed to show up on talk shows and people regarded him well. It wasn’t until much later that I learned about his genius.

Levant was born in Pittsburg, but moved to New York City in his teens, where he studied piano. He became quite good at it, and moved to Hollywood, where he befriended George Gershwin and worked as a composer, writing both film music and hit songs, as well as working on classical pieces.

In the early 30s, he came to public attention as one of the panelists on the radio show Information Please.  Levant became known for his encyclopedic knowledge and his quick wit. He was a master of ad libbing hilarious one-liners.

This became his step toward stardom. He started appearing in movies, usually playing a wisecracking pianist. His most extensive role was probably in The Band Wagon, where he’s songwriting parter with Nanette Fabray.*  He even briefly had a TV show.

His piano playing, though, took him into the classical world. He became known as one of the best interpreters of George Gershwin and his recording of Rhapsody in Blue was for many years considered one of the best.

Through everything, Levant had a rather complicated personal life. He was a massive hypochondriac, and had numerous neuroses, which he was very open about.

He also tended to do his own thing.  Harpo Marx told of how he just showed up on his doorstep one day, announcing he was going to be Harpo’s houseguest and stayed there for months. Levant did that to other of this friends and then, suddenly, announce he was leaving and go somewhere else.

Harpo also praised his piano playing. In one story, he interrupted the performance of a trio, replaced the pianist and finished the piece with them – one he had never played before – so that the others in the group felt like he’d been practicing with them for years.

Levant was a heavy smoker and died of a heart attack in 1972. Much of his radio work has been lost, and the talk show appearances are even harder to find. But I still was able to find one of of his greatest one-liners, the one that showed me he was a comic genius.

There’s not a lot about him on the Internet, and his book is out of print, but he was a man who was always a delight wherever he appeared – neurotic tics and all.

Posted by Chuck Rothman at 7:40 PM No comments: