The 50s were dubbed “The Golden Age of Television” for many reasons. Now, there was plenty of bad TV back them, but only the good shows are remembered, and the worst have been lost. But the one major difference from today was the number of anthology shows. They were quite common, often with one or two every evening. And among them are some surprising finds like “The Man from 1997,” which aired on the short-lived series, Conflict.

Johnny Vlakoz (Jacques Sernas) is a Polish immigrant who’s working to learn English. He buys several books at a bookstore to study, but just after he leaves, a strange little main in a white suit (and with self-lighting cigarettes) named B.O. Boyne (Charlie Ruggles) appears, wanting to retrieve one of the volumes. Johnny takes it back to his apartment and discovers one particular book is titled Almanac of 1997,* including racing results. Johnny is romancing Maurine Donnelly (Gloria Talbot), whose ne’er-do-well brother Red (James Garner) is an inveterate horseplayer. Johnny asks Red to place a bet on a major longshot. When it comes through, gamblers decide to figure out his secret.

The writing, which would have fit right in as one of the more lighthearted episodes of The Twilight Zone has a great science fiction pedigree. The story was by future SFWA Grandmaster Alfred Bester, best known for his classic The Stars My Destination.

Jacques Sernas was originally from Lithuania, and started out in Italian films before trying his hand on American TV. Charlie Ruggles was a character actor who worked steadily from the silent days until the 1960s, usually playing a somewhat befuddled character.**

This was a major turning point of James Garner’s career. He was supposed to play Red as a lowlife, but Garner gave him a surprising amount of charm. A producer saw him in the role and thought him the perfect actor for a new show he was developing:  Maverick.

Director Roy Del Ruth was reaching the end of a long career, where he was best known for directing for Warner Brothers in the 30s, with some musicals and gangster films under his belt.

Like most 50s shows, Conflict and “The Man from 1997” faded away. It appears to have been recorded on film, but only twenty episodes were made,*** not enough to be shown in syndication, and in ten years, obscure black and white shows were hard to find. But it is an entertaining hour.

**His most notable role was as the voice of Aesop in the Aesop and Son cartoons, but he was in plenty of TV and movies. One of his credits was in the film Ruggles of Red Gap, but, alas, not at Ruggles (not that he would have been right for the role).

***It ran on alternate weeks with Cheyenne.

Posted by Chuck Rothman at 4:09 PM No comments: 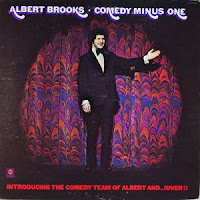