They Made Me a Criminal 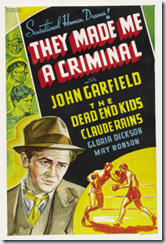 Ah, yes.  Busby Berkeley.  Master of the musical, genius of the movie dance.  And how about those Bowery Boys, with the bad jokes and malapropisms and Three-Stooges lite violence.  Certainly if they ever worked together, the result would be a gritty drama like They Made Me a Criminal.

It’s the story of Johnny Bradford (John Garfield), a boxing champion who is accused of murder.  He’s been framed, of course, but he has to fake his own death and moves to a farm in Arizona owned by his grandmother (May Robson).  It’s also the home for a group of juvenile deliquents (the Dead End Kids), who he helps to go straight by the power of boxing.  Meanwhile, New York detective Monty Phalen (Claude Rains) is sure that Bradford is still alive and goes all Inspector Javert on  him to bring him in.

John Garfield was an up-and-coming star in 1939 and this was his first starring role.  The title of the film pretty much describes his career – a long list of gangsters and shady people, who he played with passion and fire.  His career never took off into stardom (though he was the lead in many films) because he was argumentative and, more importantly, that he was blacklisted after refusing to name names to the House Unamerican Activities Committee.  The stress was an contributing factor to his health, and he died of a heart attack in 1952 at age 39.

The Dead End Kids had come to prominence in the Broadway production of Dead End and when it became a movie, they came along.  All were untrained as actors, but the producers liked their rough persona and they became a fixture at Warner Brothers after the film.  The group changed, with spinoffs and meldings and eventually became known for cheap comedies as the Bowery Boys and/or the East Side Kids.

Claude Rains hated his role, feeling he didn’t fit the character.  He had tried to turn down the part, but the studio insisted and he performed under protest.

As for Berkeley, he wasted to branch out of musicals and do something dramatic.  The movie was a success,* but he quickly returned to doing musicals.

Posted by Chuck Rothman at 2:46 PM No comments: 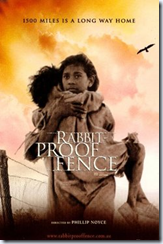 Western treatment of native cultures was never a high point of humanity. Sometimes, it was naked cruelty and genocide, but at other times, purely good intentions were disasterous.  Rabbit Proof Fence is the story of the latter.

It’s set in Australia in 1931.  The Australian government has embarked on a policy of “helping” children born to one aboriginal and one white parent.  This policy is carried out by the Protector of Aborigines, A. O. Neville (Kenneth Branagh).  He learns of three girls, Molly (Everlyn Sampi), Daisy (Tianna Sansbury) and Gracie Fields (Laura Monaghan) who are “half-caste,” and signs an order removing them from their home and put into a school.

They don’t go easily, but end up 1500 miles away at the Moore River Native Settlement.  The three girls hate it and decide to run away.  When they find the rabbit-proof fence, they realize that this can be their way home.*

The film follows their journey as the girls walk across the outback, scavenging and avoiding the tracker Moodoo (David Gulpilil), an agent of Neville, who quickly realizes their plan and tries to recapture them – for their own good, of course.

Branagh was wonderful, portraying a man who was certain he was doing good, but who only did evil.  It was a clever and nuanced performance.  The actresses playing the three girls were also impressive, carrying the movie.

______________________________________________
*A little background.  Rabbits were imported to Australia as food animals when the colony was established.  They weren’t a problem until someone released them into the wild for hunting arond 1859.  They bred like . .. rabbits and ten years later were a massive pest.  When shooting barely dented the population, various rabbit-proof fences were set up, though they only slowed the flood a bit.