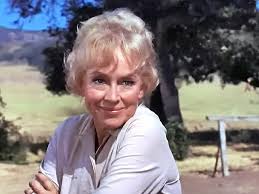 Actors are usually noticed. But some actors can have long careers in small roles and still remain anonymous. And one actor who fits this category is Virginia Gregg.

Gregg was born in Harrisburg, PA, but moved to Hollywood as a child. She started getting parts as a voice actress in radio. There were few shows of the time where she didn’t appear. It seemed like whenever they needed a female actress, she showed up. She played all ages, from ingenues to old women. I kept hearing her name as I listen to Old Time Radio broadcasts.

She also was in many films, and when TV came around, she continued to work. Jack Webb clearly liked her work; she was on Dragnet ten times, his movie The D.I, the 1966 revival of Dragnet, The D.A, Emergency! and Adam-12.  It seems like she was in every dramatic show from the mid-50s to the mid-70s. Then she switched to voicework.  Indeed, her best known movie was the voice of Norman Bates’s mother in Psycho – uncredited.

Why isn’t she well known? Well, first of all it was rare for her to play a recurring character.  Her ten performances in the original Dragnet had her playing a different character each time. And though she was fine at what she did, she did not have the distinctive voice that made someone like William Conrad identifiable. I usually didn’t spot her in a show until they announced the credits. In addition, she did not have the Hollywood looks that got you case in a lead role.  Also, she was in her late 30s when TV came in – too old for a leading actress, especially one whose body of work was small roles.

I don’t think she minded – few people can match her for working steadily for over 40 years. 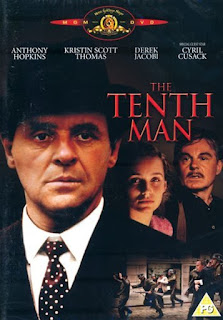 Graham Greene had a long and successful career that straddled the genres of thriller and literary novels. The Tenth Man, one of his later novels, was made into a first-class TV movie.

Jean Louis Chavel (Anthony Hopkins) is a comfortable Paris lawyer during the Nazi occupation when he is rounded up by the Nazis to be used as a hostage. When the Resistance kills a German official, the thirty men are given the ultimatum: pick three of them to be killed in retaliation.

Chavel is chosen. Desperate, he offers all his wealth and property to anyone who wishes to switch places. No one is interested until Michel Mangeot (Timothy Watson), who is dying of tuberculosis, volunteers, giving it all to his sister Therese (Kristin Scott Thomas) and mother. At the last minute Chavel tries to change his mind, but Mangeot goes to the firing squad.

Three years later, the war over, Chavel is freed and travels to his house to meet Therese. She hates Chavel, so he gives her a false name and tells her he was in the prison with Chavel and her brother. He offers to help around the house, and ends up as a servant. A relationship develops, which is shattered when and imposter (Derek Jacobi) shows up, claiming to be Chavel.

It is not a surprise that Anthony Hopkins gives a fine performance.  His Chavel is a man haunted by his decision and is brought a bit more toward normalcy by his interactions with Therese, who is played strongly by Kristin Scott Thomas.

Most impressive is Derek Jacobi. The mannerisms that make him a good guy are especially effective in playing the devious imposter. He got a supporting actor Emmy for the role* and it was well deserved.

Posted by Chuck Rothman at 2:41 PM No comments: