When I was growing up, records were hard to find. I lived an hour from the nearest record shop* and it was hard to find a selection. The Columbia Record Club was out there, but their records were far more expensive than what they cost in a store. They gave a come-on rate – a bunch of records for a ridiculously low price** – and then you had to pay their full price (IIRC $6.98 when a record was about $3
.98).

Worse, it was on a negative refusal plan. They’d send you a card every month. If you didn’t return it, their choice for the month was automatically shipped and billed to you. You had to buy a certain amount of records to end the service. and if you forgot to return the card, you’d get a record you didn’t want. The overall cost of the records was far more than buying them in a store.

That was when I discovered the Record Club of America. 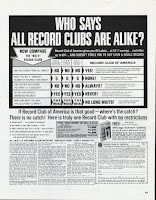 Their ads were simple.  You paid a membership fee (under $1) and bought a couple of albums at very low prices. Then, every month, you’d get a catalog. But you could just ignore it: you would only be sent an album if you requested one.

It seemed a great deal and I signed up.

Of course, there were reasons why things were so cheap.  The Record Club (out of York, PA), pressed their own albums under the license of the record company.*** The results were not as good as the authentic album, but back then no one really paid attention to the slightly worse recording quality. One album I got skipped badly. But the customer service was good:  they would send you a new one if you let them know the problem.

They also sold regular copies of the albums, usually the ones that weren’t popular enough to license. But the did feature albums that they pressed themselves.

There was a downside to this: when they pressed an album, they couldn’t return it to the record company for credit, so if they misjudged the popularity, they were stuck.

Things, though, started to go bad. The company was sued by the NYS Attorney General, calling the membership fee a scam. I thought that was ridiculous: it was a one-time fee that still made the record cheaper than anything else.

Then the company cut corners that were less laughable:  they started pressing records without getting permission. It may have been that they were licensed to press a certain number but pressed more than that to keep up with demand.  The record companies (rightfully) didn’t like that, and suddenly, they couldn’t press their own records.