The Mouse that Roared 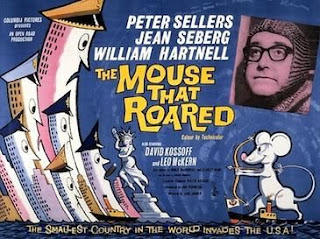 I’ve talked about Jack Arnold, the king of 50s science fiction, several times in this blog.  But Arnold did more than just SF horror. The Mouse that Roared was satirical humor, but with a science fiction bent.

The tiny duchy of Grand Fenwick, ruled by its Queen Gloriana (Peter Sellers), is suddenly facing financial ruin when an American winery comes up with a cheap imitation of the major export, Pinot Grand Fenwick wine. Despite pleas for help, the US does nothing, so the prime minister, Count Montjoy (Sellers) decides there’s only one thing to do:  declare war on the United States. They have not the slightest expectation of winning, but since the US was generous to its enemies after WWII, they expect to be treated generously. Led by game warden Tully Bascomb (Sellers), who commands 20 soldiers armed with bows and arrows,* they land in New York City, during an air raid that leaves the streets empty. They happen to find Dr. Alfred Kokintz (David Kossoff), who has invented the quadrium bomb – which makes the atomic bomb look like a sparkler.

Bascomb seizes the bomb, along with Kokintz and his daughter Helen (Jean Seberg), and take them all back to Grand Fenwick. They have won the war.  And their troubles begin.

As the cast list shows, this was a showcased for Sellers, who played the major roles.  He switches nicely between the regal Gloriana, the upper class Montjoy, and the more common Bascomb.  This seems to be his first major role in the US and he was unknown to US audiences at the time. Leo McKern** is nice as the leader of Montjoy’s loyal opposition party.

The movie is quite faithful to the book.*** It’s also very funny.  One of my favorite gags is during a chase scene.  The bomb is the size and shape of a football and has a hair trigger.  The scene starts out and suddenly there’s a picture of the mushroom cloud. Then a narrator comes in and says, “Ladies and gentlemen, this is not the end of the film. However, something like this might easily happen, and we thought we should put you in the proper mood. And now, back to our story.”

The movie was a big hit and Sellers became a star. Jean Seberg never reached stardom,**** possibly because of blacklisting and eventually committed suicide. The FBI had gone after her for her politics and the situation may have contributed.

But the film itself is funny and entertaining.  Wibberley, a prolific author, wrote four other “Mouse” novels with one, The Mouse on the Moon, also being turned into a film.
_____________________________________________________
*Including soon-to-be-Doctor-Who William Hartnell as their gruff sergeant, a role he eventually was typecast in at the time.
**Rumpole, #2, and the Clang from the Beatles’ Help
***The only big difference is that In the book, Gloriana was a young and attractive woman who eventually marries Bascomb. Obviously, Sellers wouldn’t work in the role. Instead, they added Kokintz’s daughter as a love interest.
****She started out with a big production of Joan of Arc with Otto Preminger, but got terrible reviews, mostly because she was considered too inexperienced to handle the role.  She later found success in France
Posted by Chuck Rothman at 7:22 PM 1 comment: 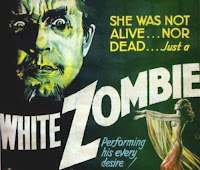 The film was a big success financially, though panned by the critics. Even fans of it today may be put off by the wooden acting. But there are enough creepy moments to make its short runtime worth it.
____________________________________________________________
*Coincidentally, also the name of an author who was one of the major contributors to The Twilight Zone
**I don’t care much for his acting:  it always seems to stolid and wooden and lacking any sense of humor. He supposedly thought this was his best performance.
Posted by Chuck Rothman at 9:35 PM No comments: