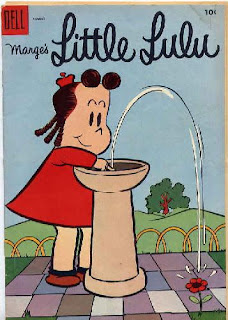 (Comic Book)
Created by Marge (Marjorie Henderson Buell)
Comic book written by John Stanley
As any boy growing up in the 60s, I loved comic book. And by that, I mean superhero comic books.*
So, when I was visiting my female cousins one afternoon and stumbled upon a stack of Little Lulu, I was less than impressed. Clearly, these were girl comics.
But I had an odd trait: show me something in the comic book form, and I'll read it. I can't help myself. So I started reading the back issues of Little Lulu.
They were terrific. I couldn't put my finger on why. There was no action. They were amusing, but not hilarious. But I enjoyed them immensely.
Nowadays, I have a better grasp of why: They were just well-written stories in comic book form.
Little Lulu was created by Marjorie Henderson Buell, who used the pen name of Marge for her work. Lulu started out as a recurring panel in the Saturday Evening Post, and graduated to comic strip and finally comic book. It was the latter where it reached its peak. Marge was a smart businesswoman and managed to syndicate the name all over the place, and even eventually as a TV cartoon.
And, similarly to Walt Disney, she couldn't write everything she had her name on. I get the impression she started hiring others early on, and the real find was John Stanley.
Lulu was originally a mischievous girl who love pulling pranks. But Stanley gave her a personality, a groups of friends to interact with, and rich backstory. Lulu was about grade school age, and her friend and foil was Tubby Tompkins. Lulu and Tubby had a rivalry/friendship that stood out among kid comics. There was also Lulu's best friend Annie; Tubby's friend Iggy; Annie's brother Alvin; and Gloria, Tubby's heartthrob.
Veering off, there were also Witch Hazel and Little Itch. They weren't part of Lulu's suburban world, but rather a real witch and her bratty niece, who tormented the Little Girl who picked Beebleberries. These were all stories within a story that Lulu would tell Alvin. The witches were nasty and always tormenting the girl (who was drawn to look like Lulu -- I'm sure the idea was that she was Lulu in a different continuum), but the girl managed to turn the tables at the end.
The stories were all clever and well plotted. When not concentrating on Witch Hazel, they dealt with kid's issues and never failed to end up a satisfying and fun read.
Stanley eventually quit the comic and it lost its way. Eventually, Marge sold the title to her distributor. Little Lulu limped along, never particularly impressive, and was finally killed in the mid-80s.
Dark Horse Comics is currently republishing the book. While not showing the genius of reprints like Krazy Kat, Pogo, and Peanuts, Little Lulu is a look at a pleasant and unassuming book that only serious comic book fans are aware of.
*To be precise, DC superhero comics. Despite the fact I lived less than 100 miles from Marvel's headquarters, you could not buy Marvel Comics where I was. The only reason I knew about them was because a friend of mine who had lived elsewhere before we met had a collection. You could stump a classroom full of people with the trivia questions "What is Spider-Man's secret identity," or "Name two of the Fantastic Four."
Posted by Chuck Rothman at 7:39 PM

I was a voracious reader by the age ot 7. Little Lulu was my best friend growing up. I loved her interesting friends and her safe but fascinating adventures. Haven't thought of her for years. How nice to hear that others enjoyed her so much also.

The frowns on the faces of the LL characters when they were being deadly serious. Alvin setting his alarm for 3 a.m. so he could wake up and see what he looked like asleep. Tubby's imaginative disguises when he was in his The Spider role. Today's comic strips can't hold a candle to stuff like that.

These were my favorites. I still laugh when I think about Tubby and Lulu popping balloons and whenever one showed the pop for the balloon, her father would come to the door and ask if they called him (his name was "Pop" hahaha

I know I'm coming late to this party, but just wanted to point out that "Iggy" was Tubby's friend and a member of the "no girls allowed" club--but he was also Annie's younger brother. Alvin was an annoying little boy of approximately five or so who lived next door to Lulu, and she'd often entertain him with stories about "Ol' Witch Hazel and Little Itch." Growing up, these were my favorite books, and I loved the special Halloween issues. Nobody did Halloween like Lulu and the gang!

My older sister and I were great fans of Lulu and them. We were always puzzled as to why the Poor Little Girl in Lulu's stories for Alvin looked just like Lulu, but with patches on her red dress. We finally decided that we were looking at Alvin's mind, and that the nearest 'little girl,' poor or otherwise, that he knew was Lulu herself.

The humor was always rather dry. My favorite line was from Little Itch just after an explosion from Hazel's huge spherical iron potion pot: "Our cottage is a many-splintered thing."

And don't forget Lulu's Diary, which was a page of text stories.

To see what current Little Lulu fans are doing, Google the following! "For Fans of Little Lulu Comics YouTube"! There are six videos in the playlist.... Little Lulu fans reading onstage at Comic-Con San Diego 2016 a classic Lulu comic story radio play style. The other five videos are slideshow-story readings of favorite Lulu & Tubby stories. All of these are done by fans! The stories are timeless, and really do have an all-ages appeal.