Shootout in a One Dog Town

Back in the day, directors specialized. Some were known for comedies, others for dramas. Burt Kennedy was known for comic westerns like the classic Support Your Local Sheriff! But he could also show his dramatic chops in the made-for-TV movie, Shootout in a One Dog Town.

It starts with a gang of outlaws ambushing some riders. One – Reynolds (Michael Ansara) – escapes and, though shot, makes it to the town of Opportunity, which does only have one dog. Banker Zach Wells (Richard Crenna) agrees to take the strongbox filled with money that Reynolds was carrying, while Reynolds goes for help. Unfortunately, Reynolds dies before he can do anything else.

The outlaws aren’t giving up, of course.  Leader Petry (Richard Egan) is greedy and not one to let that much money* slip through his hands, even after one of his gang is killed. Petry just thinks it’s a bigger share for those who are left. 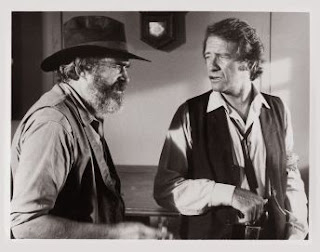 Zach enlists the Sheriff and reformed drunk, Handy (Jack Elam) to help him out, while the other townspeople decide it’s best to be elsewhere. Zach’s wife Letty (Stefanie Powers) urges him to just let them have the money, but Zach will have none of it.

The movie gives the impression it’s a comedy,** but it is more of a western drama, with some lighthearted moments. Jack Elam was in the middle of his transition from villainous henchman to comic sidekick, but the character does show a good mixture of drama and comic relief, and veteran actors Dub Taylor and Arthur O’Connell have small roles as townspeople.

Richard Crenna is also quite good as he shows Zach’s resourcefulness holding off the deliciously vicious Petry. Richard Egan makes the character purely evil, without going overboard. Stefanie Powers is OK, but her part really gives her nothing to do.

Overall, though the film is a top-notch western.

**The first credit card says it was produced by William Hannah and Joe Barbara. Hannah-Barbara did dabble in live-action action films, usually made for TV, around this time.

Posted by Chuck Rothman at 11:26 AM No comments: 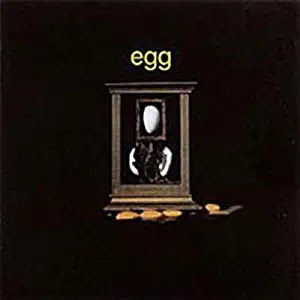 There have been several attempts to label a group of musicians after the area they performed in. The San Francisco Sound was the most well known, with several groups from that area becoming major stars. The Boss-Town Sound was far less successful.* And in England, there was the Canterbury Sound.

The name is misleading. It didn’t have much to do with Canterbury; few of the groups performed or lived there. But there was a certain similarity in their music – experimental, progressive, and with a sense of humor. Musicians drifted in and out of the groups, which included Soft Machine, Caravan, Camel, Gong, Henry Cow, and, of course, Egg.**

The members of the band – Dave Stewart, Mont Campbell, and Clive Brooks played together for several years as Uriel. When they signed a record deal, they were advised to change their name, and chose Egg.***

Their first eponymous album was a mixture of prog rock, classical, jazz, and whatever else. They had ambitions: one side consisted of “Symphony No. 2,” a twenty-minute piece, with a title that showed their playfulness.

The album was critically praised, but didn’t sell well. Still it did enough for Deram Records to pay for the recording of a second album. “The Police Force” was recorded, but Deram got cold feet and shelved it. Eventually it was released, also to acclaim, but probably to no money. While they had enough material for a third album, Deram said “no” and wouldn’t be budged.  The group broke up after that, but Dave Stewart managed to get the third album released in 1974 as “The Civil Surface.”

The music is very much reminiscent of Soft Machine, with long meandering melodies and a lot of jazz influence. The lineup is much like Emerson Lake and Palmer, though Stewart’s style is nothing like Keith Emerson, more soft and less bombastic.

Stewart went on to join Hatfield and the North, and Canterbury-like outfit. Campbell moved out of rock and into world music, where he’s a renouned multi-instrumentalist. Brooks joined the Groundhogs, and then became a drum technician for Pink Floyd.

**None of the bands got widespread commercial success; they were critical darlings, but the complexity of the music guaranteed it would only be a niche audience.

Posted by Chuck Rothman at 2:25 PM No comments: 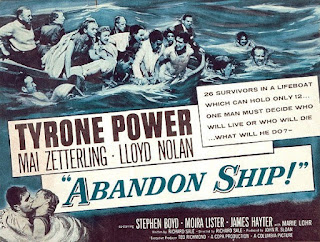 I read a lot about movies, especially in my younger days. As a result, I’ve at least heard of the top films of the era. But when Adam-Troy Castro, a friend of mine who runs a movie blog on Patreon, mentioned Abandon Ship, I had never heard of it, and he spoke so well of it that I had to take a look. It is a true dramatic gem.

The movie starts out with the image of a mine floating free on the water as the credits roll. Then it explodes.

It destroys the ocean liner SS Crescent Star, which sinks in seven minutes, killing nearly all of the 1156 people on board. Executive Officer Alec Holmes (Tyrone Power) finds his girlfriend Julie White (Mai Zetterling) and joins the 25 other survivors rest on the only lifeboat.

The big problem is that the lifeboat is built for twelve. Not everyone can fit on the boat without swamping it, so some of the survivors have to remain in the water, holding on to the gunwales.

Holmes takes charge, given command by the dying captain. And their prospects are dire. They are 1500 miles from land, and the ship’s radio operator, Sparks (John Stratton), was unable to send an SOS. Holmes has to do the unthinkable and sacrifice some of the survivors in order that the rest of them can live. 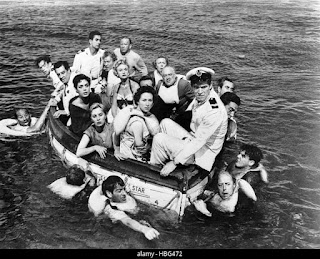 The drama is as intense as I’ve ever seen. Everything is life and death, and, as conditions deteriorate, Holmes has to make life or death decisions.

Power is excellent. He has to condemn people to death because logically it is the only choice, but he still manages to project that he hates the course he has to follow, even as he follows it.

John Stratton is also memorable as the radio operator who is clearly suffering from PTSD and guilt over not being able to bring help soon.

One important point is that the film is based on a true story. And while nowadays, that’s usually trumpeted in all the promotional material, this isn’t mentioned until the very end of the file, where they tell the legal fate of Holmes.

Director Richard Sale came up as a screenwriter and switched to directing. Some of the films he wrote had vaguely memorable.* This was his final film.

Posted by Chuck Rothman at 6:24 PM No comments: