Chris Columbus has established himself with a long list of blockbusters like Home Alone, Mrs. Doubtfire, and the first two Harry Potter films. But every director has to start somewhere, and Columbus got his directing start with a clever little film about an evening gone wrong, Adventures in Babysitting.

Chris Parker (Elizabeth Shue) is planning for a big date with her boyfriend Mike (Bradley Whitford), when Mike cancels. Disappointed, she takes a job babysitting Sara Anderson (Maia Brewton)** and her brother Brad (Keith Coogan***). who has a crush on her. After Brad’s friend Daryl (Anthony Rapp) comes over, Chris gets an urgent phone call from her friend Brenda (Penelope Ann Miller), who is stuck at the bus station.  Chris goes to rescue them with the kids in tow.

They get a flat tire, Chris has no money, and they get in the middle of a fight between a husband and wife, with a shotgun blowing out the windshield.

Then things get complicated.

There are many great moments in the film, as things go from bad to worse and killers end up on their trail. What sticks out the most for me is when the wander into a blues club. Crossing the stage, they are stopped by blues legend Albert Collins, who says “Nobody leave this place without singing the blues.”  The result is Babysitting Blues, a pure delight.

All of the performances are charming. It’s a comedy, so the dangers are all over the top, but you can’t help but like Chris and the kids. The script keeps loading on surprises and twists, making it it a joy to watch.

*Over ten years ago, I did a blog entry on Only the Lonely.

**Who is a big fan of the Mighty Thor, wearing a replica of his helmet. Evidently, the producers wanted to use a Marvel character, and Marvel didn’t want them to use anyone important, so they offered up Thor. 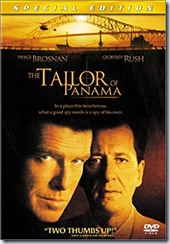 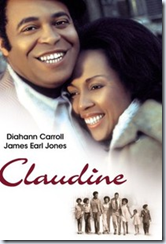 American movies tended toward big themes, with plenty of drama and action. The smaller films – character stories where the plot is less important than the people – is primarily a European thing.*  But every once in a while, an American film does cover this sort of ground.  Claudine is an example of this, what Virginia Woolf called a “Mrs. Brown” story that concentrates on the lives of ordinary people.

Claudine Price (Diahann Carroll) lives in Harlem, the single mother of six. She works under the table, since Welfare doesn’t pay enough, but runs the big risk of losing her benefits. She meets Rupert “Roop” Marshall (James Earl Jones), a garbageman, who asks her out on a date. Roop is bemused by the chaos of six kids, but still proceeds with the romance, even coping with the mistrust of Claudine’s oldest son, Charles (Lawrence-Hilton Jacobs),** who has seen his mother’s other husbands leave her. 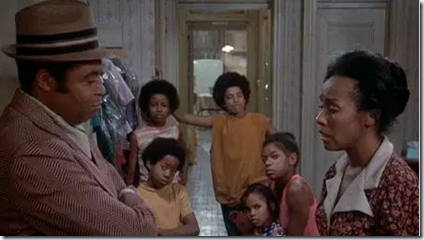 Jones is wonderful.  He’s one of the country’s best actors and this is a smaller-scale role than many of his, and he manages to keep his larger-than-life persona tuned to just the right levels, with plenty of charm as a romantic leading man. Diahann Carroll is is also great – she got an Oscar nomination for it – showing humor and strength.

In addition to the romance, the film has a lot to say about the difficulties and contradictions of the U.S. Welfare system. Claudine is caught in a trap; as she says, “If I don’t feed my kids, it’s child neglect. If I go out and get a job, and make a little money on the side, then that’s cheating. I stay at home and I’m lazy. I can’t win.” The movie humanizes people on public assistance and shows just how difficult it can be.

Director John Berry had a spotty career, most due to the fact that he was a victim of the Blacklist. He was starting to work regularly in Hollywood when he was one of the names named in the witch hunt and had to move to France in the early 50s. He returned to the US in the early 60s and moved his way up to features again.This was probably his best-regarded film.

The movie was a critical success, and probably made money, though it’s small budget helped, as did a soundtrack album.by Gladys Knight and the Pips. But because it was relatively quiet in tone, it faded from consciousness. 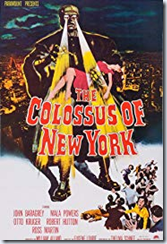 Posted by Chuck Rothman at 2:44 PM No comments: