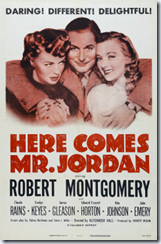 It’s always fascinating to see the origins of a well-used movie trope, and especially one that’s been remade many a time. Here Comes Mr. Jordan has been the basis of several films.

It’s the story of Joe Pendleton (Robert Montgomery), boxer, sax player, and private pilot. When his plane crashes, he dies and finds himself being taken by Messenger 7013 (Edward Everett Horton) to a cloudy place in the sky.  The person in charge is Mr. Jordan (Claude Rains), who discovers a mistake has been made:  Joe was not scheduled to die for 50 years.

This is a problem.  His body has been cremated, so he can’t go back to that.  So Mr. Jordan has to find a new body for Joe. After several tries, he’s given the body of Bruce Farnsworth, a millionaire who has just been murdered by his wife (Rita Johnson) and secretary (John Emery). Joe is reluctant, but he hears Betty Logan (Evelyn Keyes) begging for help. Betty’s father was convicted of a stock scam due to Farnsworth’s machinations, and wants his help. Sympathizing with Betty, Joe takes over Farnsworth’s body and life (to the surprise of his wife and secretary).

The setup leads to the usual and unusual complications and Joe tries to fix things for Betty* and avoid the murderous plans of the others.

Nowadays, the concept is well-worn, but back in 1941, they were new and I think the writers felt the need to make everything clear.  Joe seems incredibly slow on the uptake, having to be told things many times before he catches on.  But since this all was probably new for the audience, it was necessary to countersink the concept so people understood.

The movie was a major success in its time, winning a couple of Oscars for writing, and getting several other nominations. It was also the blueprint for Warren Beatty’s Heaven Can Wait.** Several other films also remade the story, and the concept was used in many more.

The film is a little creaky these days, but still is a lot of fun.

**The name of the play it was based on. Wild in the Streets

American International Pictures was the home of the exploitation films of the 50s and 60s – low budget films following particular movie and social trends.  In the 50s, it was monsters; in the 60s, they started doing youth-oriented films like the Beach Party movies.  And as the youth movement of the 1960s became political, the jumped on that bandwagon with Wild in the Streets.

It’s the story of Max Frost (Christopher Jones), a rock and roll star who lives the counterculture lifestyle in a Beverly Hills mansion.  The group is asked to perform at live televised rally for Senate candidate Johnny Fergus (Hal Holbrook).  Holbrook wants to get the youth vote on his side, and campaigned to lower the voting age to 18. Frost upsets the applecart by singing that the voting age be lowered to 14.  Of course, the power of your can’t be denied, so states start lowering the voting age. Eventually, the youth take over, and Max become president, where he institutes his “horrifying” agenda.

I was 15 when it was released, and the entire concept seemed silly. The main strength of the film is its soundtrack.*  Written by veteran rock and roll songwriters Barry Mann and Cynthia Weill, it was one of the few times a movie used real rock for music to represent rock music.**

The movie was a big success; given its low budget, it wasn’t difficult for it to make money.  It even got one Oscar nomination.

It certainly isn’t a classic, but, for all its flaws, it’s an energetic bit of alternate history that tells more about the time it was created in than anything else.

**Too many films of the 50s or 60s used modified big bands to play what they thought was rock music. 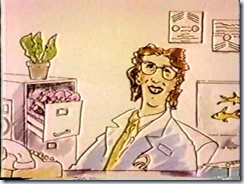 Posted by Chuck Rothman at 7:41 PM No comments: