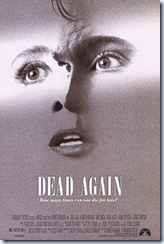 Posted by Chuck Rothman at 4:06 PM No comments: 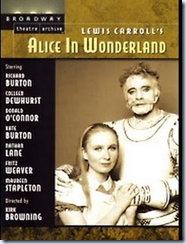 Alice in Wonderland is very hard to dramatize. There are many problems:  a picaresque plot* that has no dramatic arc, a main character who is smart but otherwise ill-defined, the need to interpolate materials from two books into one, etc.  But probably the most successful Alice was a PBS version in the early 80s that managed to add all the elements and have all the joy and whimsy of the book.

This version is based upon a version by Eva La Gallienne and Florida Friebus from 1932.**  The PBS version hewed closely to the two books and solved the problem of including elements of both by first showing scenes from Alice in Wonderland and then segueing directly into Through the Looking Glass.  Thus, the integration worked far more smoothly than most version.

But it’s the frame tale that makes this version.  We are introduced by a group of actors who are complaining that “she” – the actress playing Alice –is going to be terrible on stage.  We cut to her in the dressing room and she smokes and is trying to memorize “Jabberwocky” – and not doing a good job of it.  She looks in the mirror and turns into Alice, her short black hair becoming long and blonde.

The play follows the book pretty closely.  Scenes are cut, of course, but it’s done very well.  And the switchover to the second book works perfectly:  instead of waking from a dream, Alice goes into the looking glass world.  And it keeps many of Carroll’s poems by turning them into songs.

The strength is the final scene where Alice recited “Jabberwocky,” turning a story with an “it’s all a dream!” ending into a triumph for her.

Kate Burton*** played Alice.  She was 26 at the time, and that was a smart move.  Too often, Alice is a child or teen, an actress who can’t work Carroll’s lines in a natural manner.  Burton may not be a child, but she understands the work better, and thus the dialog gets don’t correctly. 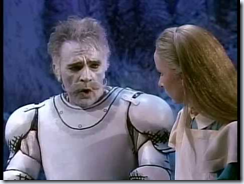 It’s hard to pick the best of any of the cast, but most notable are Nathan Lane (early in his career) as the mouse, Donald O’Connor as the Mock Turtle, Andre Gregory as the Mad Hatter, Maureen Stapleton as the White Queen, Colleen Dewhurst as the Red Queen, and Richard Burton as the White Knight (probably the most sympathetic character in Carroll’s works).

The special was taken from a Broadway production of the play, with all of the cast – except for Alice – changed.  It was videotaped in a TV studio, but didn’t try to change the “stagy” aspect of things.

But, like most things Alice, the special was ephemeral.  It was only aired a couple of times and forgotten.  But if you love Lewis Carroll, this is how it should be done.

**Both were successful actresses with long careers.  La Gallienne was a legend of the theater, and got an Oscar nomination for Resurrection.  Friebus had a long career in films and TV, and played one of Bob Hartley’s patients in The Bob Newhart Show. The opening night cast of the play included Burgess “Penguin” Meredith, Howard da Silva, and Whit Bissell (a familiar face in many 50s SF films).  The next year, it was the basis for an all-star movie version made by Paramount.

***Daughter of Richard Burton.  I see in her IMDB entry that she is a “highly respected and talented audio book reader,” so her skill at reading lines has kept with her.