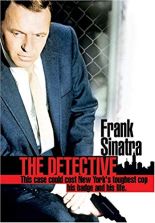 The hard-boiled detective has to move with the times. By the time the 1960s came along, the changed cultural scene gave new possibilities, and one of the results was The Detective.

Joe Leland (Frank Sinatra) is an incorruptible New York city cop who is called in to investigate a murder. The naked corpse has been mutilated, hands and other body parts cut off. When his housemate Felix Tesla (Tony Musante) is found it all falls into place and Tesla is sent to the chair.

But Leland has his doubts. And when he investigates a second, seemingly irrelevant case, a suicide that seems a bit fishy, he begins to unravel a more complex set of facts that connect the two.

The movie reveled in its grittiness, touching on subjects that couldn’t have been tackled before, like drug abuse and corruption. Most notably, it was willing to talk about homosexuality. Now, it was hardly a balanced portrayal, even if some of the characters were sympathetic. I doubt it holds up very well, but the fact that it was portrayed directly was new in 1968 and some of that might be because they didn’t think the public was ready for a nuanced look.

This was one of Sinatra’s better roles. He seemed to really throw himself into a character instead of just playing himself and his Joe Leland is tough and no-nonsense, with some hints of vulnerability.

The movie was a success, but has slowly faded away. It might be too cringeworthy to get through today.

One side note:  author Roderick Thorp wrote a sequel about the further adventures of Leland.  It was forgotten for twenty years, until someone took the bare bones of the second novel and planned to make a movie about that. The problem was that Sinatra was given first shot at the role in any sequel. Sinatra looked at the script and knew he was too old to play the lead, who had been turned into an action hero. Bruce Willis took it instead, and Die Hard became a classic.
Posted by Chuck Rothman at 10:24 PM 1 comment:

In memory of Jimmy Nelson

http://greatbutforgotten.blogspot.com/2015/05/jimmy-nelson.html
Posted by Chuck Rothman at 3:10 PM No comments: 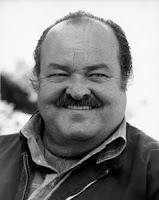 (1920-1994)
Wikipedia Page
One of the joys of having SiriusXM in my car is listening to Old Time Radio. There are some great old radio shows on there, and I began to notice a name popping up all the time in the credits, an actor who made a belated move into TV toward the end of the career, hampered by his appearance. But in the radio days, just about every drama seemed to have an appearance by William Conrad.

Conrad was born in Louisville, KY and, after the war, became a fixture on radio. He estimated he played more than 7500 roles, and I doubt that’s much of an exaggeration.  His deep voice made him a natural for authoritative roles.

His best known role was that of Matt Dillon in the radio version of Gunsmoke. He was perfect in the part, creating a vivid character who fought for law and order, and allowing no nonsense from anyone. Conrad was almost turned down for the part, the producers thinking his voice had been too familiar after all his radio performances, but they changed their mind after the audition.

But when Gunsmoke was adapted for television, Conrad wasn’t considered for the role.

In Hollywood, physical appearance is key, and Conrad was too heavy set. He didn’t fit into the image of a leading man, so was passed over* in favor of the more conventional leading man in James Arness. The radio show continued in parallel, but as radio drama started fading out, Conrad found it harder to get work. His talent got him jobs in movies, usually as a henchman.

But voiceover work became his meal ticket. He was in demand as a narrator for various shows. The most memorable of these were in the various incarnations of Rocky and Bullwinkle, where he narrated their adventures.** Conrad was perfect in the role, and it was one of the times the funny side of him shows.

Finally, in 1971, Conrad made it to TV stardom in the Quinn Martin detective show Cannon, which set up a backstory to explain his physical bulk.  The show was a hit, running five seasons, showing many people the man behind the voice – even if they didn’t know the voice.***

Conrad later starred in a failed Nero Wolfe series, and then had another five-year run with Jake and the Fatman, while still keeping his hand in narration work. He died a couple of years after the show ended, leaving a body of work that anyone would be proud of.
_______________________________________________________
*As was the rest of the radio cast. In his early days, Conrad was just a little bit blocky, but he gained weight as time went on. Photos of him during the Gunsmoke days indicate he was already a bit heavy, plus he was not conventionally handsome at any point.
**Also the adventures of Dudley Do-Right
***Cannon was on a couple of years before I learned that the “Bill Conrad” in the Rocky and Bullwinkle credits was the same guy.
Posted by Chuck Rothman at 9:26 PM No comments: