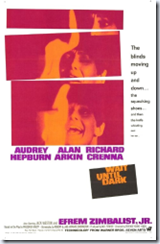 Audrey Hepburn became a star by portraying a woman of cool charm and elegance, usually in romantic films.  But she could do more than that, and shows a different side of her in Wait Until Dark.

The film starts with Lisa (Samantha Jones) smuggling heroin into the US inside a cloth doll.  She befriends Sam Hendrix (Efram Zimbalist, Jr.) and, when she sees trouble at the airport, asks Sam to keep the doll.  Sam is married to Susy, who was blinded several years previously in an accident, but who doesn’t let that slow her up, as she tries to be “the world champion blind lady.”  But a group of crooks, lead by Roat (Alan Arkin) track down the doll and Susy, looking to take it back by any means possible.

Susy is the the type of woman heroine I admire:  smart, resourceful, and able to fight back as best she can.*  Hepburn is excellent in every scene and got a well-deserved Oscar nomination.

But the most bravura performance is Alan Arkin’s.  This was one of his first roles, and he’s brilliant.  Roat is one of the best types of villains – very smart, and always ahead of everyone, but with a casual violence that’s absolutely chilling.

The film is often cited as having one of the scariest moments in film.  It’s really more startling than scary**, but it is memorable.

Hepburn took a leave from films after this one to raise her family, not appearing until nine years later in Robin and Marian.  Arkin made some bad choices, but in the 21st century came back into his own as a character actor, with an Oscar win.***

**Startling an audience is ridiculously easy; any third-rate filmmaker can manage it:  you set up a character, keep any background to the minimum, and pretend that the big bad is dead.  Then you have the bad guy jump out at you while the soundtrack loudly plays music, preferably a discord.  The audience will jump every time.  If you want to see horror, watch Osama or The Tenant.

***He wasn’t nominated for Wait Until Dark, though he certainly deserved it.  When asked about it, he said, "You don't get nominated for being mean to Audrey Hepburn."

Posted by Chuck Rothman at 8:47 PM No comments: 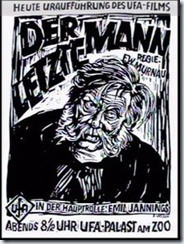 Director F. W. Murnau has been in the news lately (for bizarre reasons) and the articles always mention that he was director of Nosferatu, the first vampire film.  And while Nosferatu* is an important film historically, during his career most people considered The Last Laugh as Murnau’s major achievement.

The story is simple.  It follows a hotel doorman (Emil Jannings).  Proud of his job (and the uniform he wears), the doorman goes about his business with pride and flair. But he is growing old.  One day, a younger man shows up at the door, wearing the doorman’s uniform.  The doorman has been demoted to washroom attendant, a “reward” for his years of service.  The drop in prestige causes his life to unravel.

On a technical side, the movie (nearly, but more on that) attains an ideal that silent directors had always wanted to achieve:  to tell the story with only visuals, and without any title cards.  Murnau achieves this.  There is no dialog, no intertitles to show what the characters are saying.  Dialog is never spelled out, leaving the acting and the context to make it clear what the people are saying.  The scenes – shot by cameraman Karl Freund – also push the technical envelope of the time, but using a moving camera extensively, something that had rarely been attempted at all at the time. 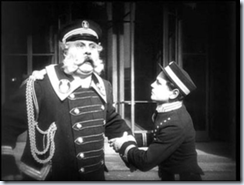 The story is also very affecting.  The loss of prestige breaks the doorman, and the intense sense of loss and depression.  Emil Jannings was one of the best actors of the late sound period** and he imbues the part with such sadness that you believe he is a man utterly crushed.

The movie’s ending was the reason for the single title card.  The studio insisted on adding a happy ending, so Murnau and writer Carl Dreyer added a obviously tacked-on and improbable*** happy ending (hence the card, and the film’s English title).

The film was praised as a classic from the start.  As a silent film, of course, the acting is not what we are used to today, since you couldn’t express emotion with your voice.  But taken on its own terms, it’s a landmark of cinema.

*An uncredited retelling of Dracula.

I like quirky movies, and also movies that are character and incident driven.  It can be difficult to pull off, but Frances Ha manages the task with aplomb.

The movie features Frances Halladay (Greta Gerwig) and a 27-year old dancer still trying to hold on to her dreams – which weren’t really coming true in the first place.  Her best friend Sophie (Mickey Summer) moves out, forcing Frances to hustle just for a place to stay.

Greta Gerwig is excellent, but then, she has to be for the film to work at all.  Frances is sweet, frantic, naïve, and more than a little disorganized, with a habit of awkwardness.  The movie meanders along with Frances’s life as she tries to make sense of it all.

The film got critical raves, and did as well as a small quirky, black and white film can in the age of blockbusters.

Posted by Chuck Rothman at 6:57 PM No comments: