Picking out a great but forgotten film by John Ford is nearly as hard a choosing one by Alfred Hitchcock. Both are great directors whose work is viewed and written about decades after their deaths. But my choice was a film that seems to be overlooked despite it showing themes that Ford not only used later, but also was highly praised.

Fort Apache was the first of what later was called Ford's "Cavalry Trilogy," though he never conceived them as being interconnected. And it was a tossup for me to choose between this and the second of these films, She Wore a Yellow Ribbon, which features what is probably John Wayne's best performance.

But I like Fort Apache for several reasons. Number one is Henry Fonda. He plays Owen Thursday, who has just been assigned to run the fort. Thursday is ambitious, interested in glory, and a stickler for military rules. Wayne plays Kirby York, his second in command. Thursday comes from the east (his daughter is name, tellingly, Philadelphia), and thinks he knows how to handle the problem with the Indians in the territory. York, who has been at the fort for ages, knows more, but since he's second in command, he has to defer.

This sets up a very interesting conflict. Thursday does not like York's more relaxed method of command. He also thinks he knows what's best when dealing with the Indians, despite York's protests. 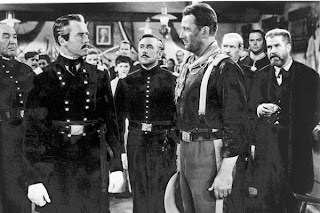 Because there's a second element: the treatment of native Americans. They are definitely mistreated, especially by Thursday, who sees an Indian war as a way for him to get the glory he deserves, and the Apache tribes as savages to be tamed. York, on the other hand, knows the Apaches are willing to be honorable if treated honorably. One of the major conflicts is when York discovers that Thursday has forced him to lie to Cochise. York is furious, but is forced to swallow his anger because he is second in command.

The movie's climax is a parallel to Custer's Last Stand, with Thursday blundering into a trap after sending York back for insubordination. And despite his miscalculation, Thursday ends up becoming a hero (though a dead one). In one of my favorite scenes, a reporter asks York about the story and whether it is true. There is a pause, and then York confirms it. This tacitly parallels the famous line from Ford's later The Man Who Shot Liberty Valence: "When the legend becomes fact, print the legend."

Fonda is great in a very atypical role. He manages to bring a great deal of depth to a character who in other hands would be just a martinet. Wayne, too, is excellent as a man who is forced to do what is against his better judgment.

In addition to the main plot, there are some great scenes of life in the cavalry. There's a nice sequence showing a formal ball at the fort, and a sequence of the soldiers on patrol (paralleling what was shown on She Wore a Yellow Ribbon.

Victor McLaughlin is fine comic relief as Sgt. Major O'Rourke, the man who keeps the men in line. Shirley Temple is also good in one of her better adult rules as Philadelphia.

For its sympathetic treatment of Indians, and the acting of Wayne and Fonda, Fort Apache is a movie to seek out.