Lugosi's talent was wasted due to his drug addictions, and that's one reason for his popularity -- it's a much better story than Karloff's more sedate life (and, of course, the Ed Wood connection is fun).  I recognize him as an icon, but, though he did made a few good movies (including films with Karloff, notably The Black Cat and Son of Frankenstein), he was never more than a competent character actor, and just not in Karloff's class.

The Body Snatchers was Karloff's moment. It was an Oscar-worthy performance as John Gray, the character who gives the movie its name. Gray supplies corpses for Henry Daniell's medical school.  Of course, Gray does not just snatch corpses from graves; he will go out and find people and turn them into corpses. (BTW, this was a real issue in 18th and 19th century medical schools:  the book The Italian Boy gives an account of the time, when medical schools kept wicker hampers outside their gates for the convenience of body snatchers.)  Karloff dominates every scene he's in, smiling and gently sinister.

Lugosi has one of his last good roles as Joseph, a worker at the medical school man, who foolishly tries to blackmail Gray, with predictable results.  Lugosi does a nice job of portraying the poor man, but it's all Karloff's film.

One nice touch of the film is that Karloff's Gray is not entirely evil; and Daniell is not entirely good.  Both have both good and evil sides, but Karloff is much more aware of the dichotomy that the doctor is.

One nice bit of history is that this was directed by Robert Wise, who went on to direct an even greater horror:  The Sound of Music.

This is a nice, atmospheric horror film (the final scene in the carriage is quite powerful) with some great performances.  Overlooking Karloff is one of the MPAA's biggest Oscar omission.

Posted by Chuck Rothman at 9:22 PM No comments: 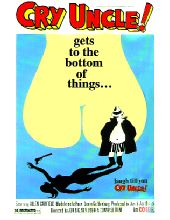 Directed by John G. Avildsen
Written by David Odell from a novel by Michael Brett; Additional dialog by Alvildsen and Garfield.
Starring Alan Garfield, Madelyn Le Roux
IMDB  Entry
When the MPAA rating system when first implemented, some directors decided to make the most of their new freedom with sexual matters.  The X rating was not solely for porn (as it soon became), a handful tried to make good movies that were still more explicit than the R, seeing how far they could push the envelope.  Cry Uncle tore up the envelope and stomped on the pieces.  Even today, it is still probably the raunchiest film put out by a major studio.
Director John G. Avildson made a career to turning actors into stars.  His first major film, Joe, brought Peter Boyle and Susan Sarandon to the attention of the movie-going public. His best-known film is Rocky, which made another unknown actor into a star.  Jack Lemmon, though established, won an Oscar in Avildson's Save the Tiger (seven actors got Oscar nominations for their work in Avildson's films) and The Karate Kid promoted Ralph Macchio and Pat Morita to movie presences.
Cry Uncle did the same for Alan Garfield.  Admittedly, Garfield (sometimes billed as Alan Goorwitz) never became a star, but he was one of the top character actors in 70s and 80s, and is still working today.  He showed up in dozens of TV shows and movies (including The Conversation, Nashville, The Stunt Man, Cotton Club and Beverly Hills Cop II), a chubby, balding guy, with a whiney voice and thick New York City accent.
When it came out, Cry Uncle was rated X -- one of a handful of legitimate films of the time to get that rating.  Today, of course, it would be an R -- barely.  It reveled in its raunchiness and sex.  Nowadays, there are films like that (e.g., American Pie), but they tend to focus on teenagers, and the issues with getting someone to bed.  They are sex comedies for teens.
Cry Uncle is a raunchy sex comedy for grownups.  It's set up as a detective film:  Garfield plays Jake Masters, private eye, investigating the murder of a porn actress/hooker.  It takes him into a world of sexual intrigue.
And all the sex is upfront.  The movie is never coy about it:  this is true bawdiness, where the sex is there for all to see.  Though it's portrayed a bit more discretely than porn, the dialog is filled with blatantly blunt talk of sex.
And it's funny.  Part of the joke is that the dumpy Garfield is able to get as much sex as he wants (sometimes more than he wants).  And the scene of the inadvertent necrophilia is priceless.
The film was probably never shown on TV (there was no way to  cut it down and still make sense), and by the time HBO came along, it had been forgotten.  The movie is not for everyone, and the language is going to put a lot of people off.  But if you have the sense of humor that thought American Pie was too tame, this may be worth a shot.


Posted by Chuck Rothman at 6:33 PM No comments:

Nearly forgotten today, Putney Swope was a sensation when it came out.  Directed by Robert Downey (before you needed to put a "Sr." after his name), it was a brazen and bizarre little black comedy that tweaked consumerism and race relations in the 60s.

The set-up was simple.  The head of a struggling NYC ad agency drops dead during a meeting of executives.  They have to elect his replacement and scribble on ballots until it's pointed out they can't vote for themselves, at which point the ballots are all discarded.  They vote again.  The winner is Putney Swope, the agency's token black man, who everyone voted for because they thought no one else would.  Swope (Arnold Johnson) stands at the head of the meeting room and says he doesn't plan to make many changes.

Cut to a few weeks later.  All the white faces are gone from the agency, and its name is now "Truth and Soul, Inc."

Commercial Narrator: Jim Keranga of Watts, California is eating a bowl of Ethereal Cereal, the heavenly breakfast. Jim, did you know that Ethereal has 25% more riboflavin than any other cereal on the market? Ethereal also packs the added punch of .002 ESP units of pectin!
Jim Keranga (grinning): No shit.

Swope is out to outrage society; his motto is "Rockin' the boat's a drag. You gotta sink the boat!"  The film is a nasty-funny over-the-top attack on everything.  There are running gags, scathing satire on the concerns of the day, and a lot of weirdness.  The film is in black and white, but the ads are in color.

It was an impressive film for Downey (he even dubbed all of Johnson's lines; Swope's/Downey's voice is still memorable after 40 years -- a gravelly roar)  Alas, his follow-ups were flops, and he's struggled along, known now only for being the father of his actor son (drugs had something to do with it).    It's not a film for everyone, and certainly not as revolutionary as it was in 1969, but worth a look.

Posted by Chuck Rothman at 11:01 PM No comments: