I Walked With a Zombie 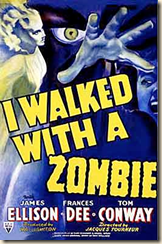 Zombies are the big horror movie stars of the day, supplanting vampires for everyone except readers of Twilight.  It's spilled over into books, with Pride and Prejudice and Zombies becoming a big best seller.  But if the idea of mixing zombies and literature in an old one in film, starting with one of the first zombie movies ever made, I Walked with a Zombie.

The film was one of the early Val Lewton horror films of the 1940s.  Lewton brought on a new concept in horror:  one where the monster was understated and the violence portrayed obliquely, so that the viewer's imagination took over. After the success of his Cat People, Lewton bought an article by Inez Wallace called "I Walked With a Zombie" in order to turn it into a film.

But the story wasn't what Lewton wanted, so he had his writers Curt Siodmak* and Ardel Wray try something else:  he handed them a copy of Jane Eyre and told them to use that as a basis.

In the film, Betsy Connell (Frances Dee) goes to work as a nurse on a the island of Saint Sebastian in the Caribbean, in order to care for Jessica Holland (Christine Gordon) the wife of planter Paul Holland (Tom Conway).  Jessica is in some sort of trance.  Her doctor calls it the result of a tropical fever, but the maid Alma (Teresa Harris) hints at the dark doings of voodoo.

Yes, this is the original idea of a zombie -- not just the living dead, but rather a corpse brought to life due to magic rituals.  Betsy dismisses the idea -- agreeing with Paul's mother (Edith Barrett) that there's no such thing.  But when modern methods fail, she begins to think about using voodoo to help cure Jessica.

The film is better than its description. It's long on mood and atmosphere and hints at the supernatural while leaving the question open. The most striking sequence is when Betsy decides to take Jessica to a voodoo ceremony in the hope it might help.  The journey is a trip through a creepy sugar cane forest, meeting M. Carre-four (the imposing Darby Jones) and getting caught up in a voodoo ceremony, which leads to a surprising twist.

The story, of course, is much like Jane Eyre, with Betsy falling in love with Paul and Jessica as Rochester's wife.  While it is certainly not a scene-for-scene remake of the book, the idea of taking the story from literature gives the movie something more than just the encounters with voodoo.

Director Tourneur is great at slowly building tension and is smart enough to treat all the voodoo trappings with utmost seriousness, and even with respect.  He also keeps up a lot of ambiguity as to whether voodoo was really supernatural and whether it really had anything to do with the events of the film.

One of the more interesting aspects is the film's treatment of the Black characters in the film.  In a time when African-Americans were only portrayed as stereotypes, the movie shows them a real people.  Maybe they believe in voodoo, but they are portrayed with some real depth and humanity and without any of behavior that makes portrayals of Black cringeworthy.

Tourneur made several other horror films with Lewton, and later with The Night of the Demon. I Walked with a Zombie is a classic of the genre, and probably the place to begin to see how zombies originated.

Posted by Chuck Rothman at 11:14 AM No comments:

Bored of the Rings (book)

Back when I was around 14 and a big fan of science fiction and fantasy, I picked up an interesting book in the library: The Fellowship of the Ring.  It was something was seemed right down my alley, yet I only got a quarter of the way through when I lost interest* and returned it.

That I wanted to read.  But they insisted I read the trilogy first.  I reluctantly picked up The Hobbit, which I found I liked a lot. But Fellowship was still tough going for me.  Eventually, I found the answer:  I purchased a copy of Bored of the Rings and kept it in the original paper bag, stapled together, until I finished reading the entire trilogy.  Then, I tore into the bag and began to read.

It made slogging through the trilogy worthwhile.

The book was a wicked parody of the trilogy, sort of like Mad Magazine only with a much greater eye for the ridiculous.  The character names, for instance, were all based upon trademarks:  Frito, Spam, Pepsi, Moxie, Goodgulf, etc.  There was inspired doggerel,*** silly jokes, bawdy humor and a general parody not only of the book, but of heroic novels in general.  Think of Monty Python before they were known in the US.

The book became a minor classic and, of course, its authors went on to revolutionize American humor.

And it did get me to read Lord of the Rings.

*During the Tom Bombadil section. It was the first book I ever started reading and didn't finish.

**People may know of it due to movies like Animal House and Vacation, but the magazine was much more important that.

*** Like the prediction, "Five nine is your eight and 180's your weight/You'll cash in your chips around page 88."

Posted by Chuck Rothman at 12:50 PM No comments: 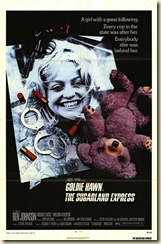 Steven Spielberg became a superstar director with Jaws. Fans of his career, of course, remember he got started directing a sequence of the original Night Gallery TV movie, and the TV movie Duel.  Oddly enough, however, his first film seems to get short shrift. The Sugarland Express was not a blockbuster, and was far less action-oriented that the films where Spielberg made his reputation, but it ranks among the best first films by any director.** Yet somehow it gets overlooked when considering his films.

The story begins with Lou Jean Poplin (Goldie Hawn), who visits her husband Clovis (William Atherton) in a halfway house.  Clovis is about to be released from prison in a few weeks.  So Lou Jean breaks him out.  They overpower rookie cop Maxwell Slide, steal his patrol car and, with Slide as their hostage, head toward Sugar Land.**

The escape as inexplicable and as it is inept, but the trio drive, followed by Captain Harlan Tanner (Ben Johnson) and police from every town they pass through on the way.

We learn the reason for all this early on.  Lou Jean's baby had been in a foster home and they were preparing to adopt him.  Lou Jean will do anything to stop this.  The result is a long low-speed chase.  Indeed, the lasting image of the film is watching the police car carrying them driving across the Texas landscape, following by an ever-growing parade of cop cars waiting for a chance to stop Lou Jean.  She becomes something of a folk hero -- a woman fighting for her child -- and a celebrity.

This is one of Goldie Hawn's best roles (she thinks so).  She manages to wring a lot out of the role, being both charming and also more serious in purpose than in many of her films.  Ben Johnson is also quite good as a man who is trying to find a peaceful solution to a situation that is spiraling out of control.

The film did respectably at the box office*** but was quickly forgotten. Why?  Most likely because of Jaws.  The film put Spielberg on the map and identified him as a maker of blockbuster films.  He followed that up with Close Encounters and -- after the flop of 1941 -- the Indiana Jones films.  People expected big films with plenty of action from him, and the small, more character-driven story of Sugarland Express just didn't appeal.  By the time Speilberg started making more serious films, it had already been forgotten.

Nowadays, when people think of Spielberg, they think of his blockbuster, and of the more serious films**** that have helped him earn Hollywood respect. The Sugarland Express, though, is among his best work and showcases some fine performances that shouldn't be missed.

*Some others: Preston Sturges's The Great McGinty, Mel Brooks's The Producers, Peter Bogdonovich's Targets, Kevin Smith's Clerks, and, of course, Citizen Kane.  It's interesting that in all the films, the director was also credited with the writing.

**A real town in Texas.  The movie calls it Sugarland, but the town is two words.

***Bolstered by the fact that it had two recent Oscar winners in Hawn and Johnson.

****Though he has tried a couple of "smaller" films (for Spielberg) lately in Catch Me If You Can and The Terminal.

Posted by Chuck Rothman at 1:17 PM No comments: