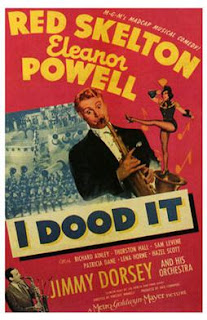 Eleanor Powell was one of the great dancers of film. I had seen very little of her, especially not on her own.*  So I happened to stumble upon I Dood It** with Red Skelton, a favorite comedian of mine from his TV days, and finally got a chance to see her in a feature.

The movie focuses on Joseph Rivington Reynolds (Red Skelton), a pants presser who becomes enamored of the Broadway star Constance Shaw (Eleanor Powell).  He shows up at every performance and knows every line of her current play, a Civil War romance. Shaw is engaged to her co-star Roy Hartwood (John Hodiak) who is two-timing her with Suretta Brenton (Patricia Dane). Angry, she goes to Joseph, who is following just to get a glimpse of her, too shy to even approach her. Due to a misunderstanding, Constance thinks he’s the rich owner of a gold mine and marries him out out spite.

The movie is based on Buster Keaton’s Spite Marriage and Keaton actually provided gags. Indeed, one of the comic set pieces comes from the Keaton film, when Joseph tries to put Constance into bed after she has fallen asleep.

The plot is slight but serviceable.  What lifts up the film is the musical numbers. Director Vincent Minnelli** stages them all as though they were on stage, and they all give Powell a chance to amaze. She is known for her tap dancing, which is especially good, especially since she does it all in high heels. What really stands out, however, is her cowboy roping dance, where she does thing with a lariat that are extremely impressive (especially at 3:30 of this clip)..

What is also of note is the appearance of Black performers in the film. Both Hazel Scott and Lena Horne perform major numbers. Butterfly McQueen – from Gone with the Wind – also has a small role as a maid, and there is little condescension toward her.

Skelton is fine. He was always comfortable with slapstick and silent comedy, which puts him in good stead.

Director Vincent Minnelli was near the beginning of a long career, primarily with movie musical. This is one of his lesser-known films.

There’s also a lot of references to World War II, which was going on at the time. There is a subplot involving German saboteurs, and one joke when Skelton mentions butter and an entire room takes notice, because it was rationed at the time.

Powell’s career was surprisingly short. She made only one more movie after this and switched to working nightclubs. She did get some recognition in the That’s Entertainment series, but most of her films tended to be revues; this is one of the few times she played a character.

*She did once partner with Fred Astaire, and clips of that have been shown in many contexts.

**The title comes from a catchphrase from Skelton’s radio show, where he played the “Mean Widdle Kid,” a Bart Simpson-like boy. 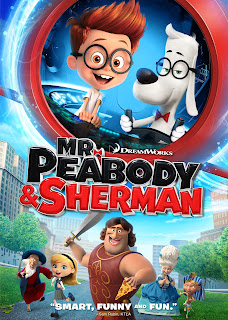 When I was growing up, I had a clear favorite cartoon show:  Rocky and Bullwinkle* and my favorite part of them was “Peabody’s Improbable History.” It had everything I liked and it was always a treat.** When I heard they were making Mr. Peabody and Sherman, I was wary. I didn’t think they could keep up the craziness of the original.*** It took a while for me to catch it, but when I did, I realized it was a pretty good adaptation.

Mr. Peabody (voice of Ty Burrell) is a genius dog who adopts Sherman (Max Charles) as his own.****. He uses his time machine – the WABAC***** – to teach him about history.  In school, however, Sherman contradicts the teacher when she says George Washington chopped down a cherry tree, leading to teasing by Penny Peterson (Ariel Winter), leading to Sherman biting her, ultimately bringing in the Child Protective Services agent, Karen Grunion (Allison Janney). In an attempt to smooth things over, he invited Penny’s parents (Stephen Colbert and Leslie Mann) to try to smooth things over. Despite warnings against it, Sherman is goaded into telling Penny about the WABAC, and she ends up in ancient Egypt to be married to King Tut.

That’s the start of various frenetic adventures through time, with some nice animated action sequences, until the entire thing escalates so that Mr. Peabody has to save the day.

The main difference from the original is that they develops the relations between Mr. Peabody and Sherman, turning it into father/son situation. Of course, the original had no time to delve into such things, but when you’re turning a five-minute cartoon into a feature film, something has to be added.

It also changed the structure from the original. Mr. Peabody would go back in time to see historical events and had to act to make things work out as history was written.******

The voice cast is excellent. Ty Burrell manages to make Mr. Peabody into a know-it-all without him sounding like one. And there are quite a few surprising voice cameos.

And, of course, the puns. The original was notable for ending each episode with a terrible pun.******* It probably led to my lifelong love of the form.

There were also some great references to the original, and to other Jay Ward cartoons. I especially liked the final gag, which refers to the original TV opening sequence.

Definitely worth a look. A new take on the characters that shouldn’t disappoint long-time fans.

*In all its titles:  The Rocky Show, Rocky and His Friends, and The Bullwinkle Show.

**Nowadays, they don’t quite hold up as well as the main Rocky and Bullwinkle segments, but at still pretty good.

***I was also wary of the live action Rocky and Bullwinkle movie, but found it better than I expected.

****Leading to the line taken from the original: “If a boy can adopt a dog, I don’t see why a dog can’t adopt a boy.”  (Though the original used “own” instead of “adopt.”)

*****Also spelled “Wayback,” which is the most common way it’s referred to.

*******Just like in Through Time and Space with Ferdinand Feghoot, which may have been an influence.