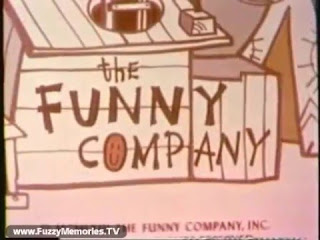 When people talk about Saturday morning cartoons, they’re usually referring to the theatrical cartoons that were repurposed for TV (Bugs Bunny, Tom and Jerry, Popeye) or half-hour made-for-TV shows (Rocky and Bullwinkle, Magilla Gorilla, Tennessee Tuxedo). But that was only a part of it. There were various short syndicated cartoons that were sold to local kid shows as filler. One example of this was The Funny Company.

The cartoon showed a group of kids as the Funny Company, which included Buzzy Bell, Jasper N Parks, Polly Plum, Terry Dactyl (a pterodactyl), Shrinking Violet* (who could shrink down to tiny size). and several others. Each episode had them doing some sort of task, where they crossed paths with Belly Laguna.** Laguna planned some sort of nefarious task, which failed due to the efforts of the Funny Company.

Most memorable was the show’s  theme song

The show came out at a time when television was being criticized for its lack of educational content, so,as a selling point, it stopped the story (what little there was) to show a two-minute educations film, usually with the help of their computer, the Wisenheimer machine.

Over 250 episodes were filmed, filling time not only on Saturday morning, but during the week.

Posted by Chuck Rothman at 5:49 PM No comments: 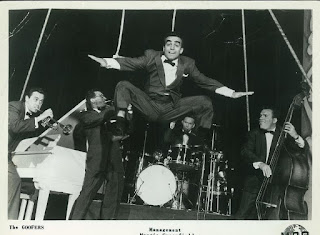 Lately I’ve been watching reruns of The Ed Sullivan Show. It’s fascinating to see the big-name acts that appeared on the show, plus the acts I remember but who are less well known today. And sometimes, they feature an act I’ve never heard of. Most of these are acrobats.  The Goofers were both.

The band split off from Louis Prima’s band, five musicians who wanted to follow their own path. They included dancing in their act – not too strange, of course, though the Goofers were more acrobatic than most dancers. But Jimmy Dell had something else to offer:  the ability to perform on a trapeze. While playing. Dell would do a few tricks then hung by his feet.  Someone else handed him a double bass, where which he proceeded to perform a solo on while hanging upside down.  After a break, he’d do another solo upside down on a trombone.

The group didn’t have any notable hits – not surprising, since they were such a visual act – but played in Vegas throughout the 50s. Their songs were pleasant and jaunty and they no doubt were a big crowd pleaser.

The broke up in the early 60s, I suspect mostly because it was hard to expand the act, but also because audiences were moving on from the jazz/big band sound.

Posted by Chuck Rothman at 8:41 AM No comments: